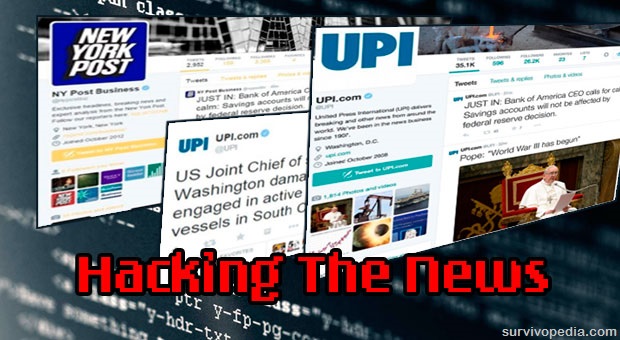 With the majority of the news outlets sold-out to the liberal progressive movement, it’s become increasingly harder to get accurate news reports of what’s happening in the world around us. This is nowhere more clearly than in the world of politics.

Everything that is done by every politician is spun by the spin doctors to show their particular ideological cant, regardless of what truly happened. Bad becomes good, good becomes bad and anything the Republican Party does is turned into pure evil, designed to destroy everyone except the wealthy. Forget about what’s really going on, all that matters in the news world is getting the right propaganda out; the right spin on the story.

{adinserter emp}But something new has hit the internet this week, hacking into news sites and putting a new spin onto the news. That is hackers getting into mainstream news outlets and putting forth false stories as if they were true. Whether being done as a gag or with nefarious intent, this new twist on the news could become very dangerous.

Both the New York Post and UPI’s Twitter accounts were hacked into, with stories about how World War III has begun. According to the tweets, the Chinese attacked the USS George Washington, a nuclear powered aircraft carrier and damaged her. The report went on to say that the U.S. Navy was engaged in combat against Chinese vessels in the South China Sea.

In a further tweet on UPI, which is obviously associated with the first two, the Pope declared that World War III had begun. If that wasn’t enough to shake people up, another New York Post tweet said that the Federal Reserve was moving into negative interest rates; something that has never happened before.

Were these merely pranks or was it a test to see what sorts of results such news would cause? At this point, we really don’t know. We don’t even know the identity of the hacker or hacker group, as nobody has come forth to take credit for these actions. That pretty much eliminates the activist group Anonymous, as they tend to brag about their victories.

What’s on The Dark Side?

The scary thing here is how many people could have read those reports and believed them. Most liberals still accept whatever the mainstream press says as gospel, often taking action on that news. I’m not just talking about low information voters here; I’m talking about the decision makers.

All government agencies and trading houses keep close tabs on the major news sources, including what’s trending on social media. That is often considered to be one of the best sources of news, especially since those sources support our liberal king, dictator, president so well.

Both China and Russia have invested a fortune into cyber-warfare, an area where the United States military is horribly behind. With so many Americans dependent upon these news sources for making decisions, could this have been a test by one of those countries cyber-warfare troops?

If so, this could easily be the forerunner of the next global war. Information leaked through news sources could cause government officials to make some major decisions erroneously.

Considering that the liberal left trusts the liberal news much more than they do government intelligence organs, they could ignore what the CIA and other alphabet agencies are saying, deciding instead to make their decisions based on what is being heralded by the news. That sort of mistake could lead us into the next World War.

Even without taking us to the brink of war, false news reports could cause any number of erroneous decisions on the part of government officials. Or, let’s leave them out of it for a moment; what could it do to Wall Street?

Wall Street traders make split-second decisions based a constant stream of news. They are all news junkies, constantly plugged into financial and political news, seeking out the next trend. A few false stories could easily lead them in the wrong direction, making the wrong sorts of trades. That may not sound like much, but left unchecked, this could cause a financial avalanche, bringing down the stock market.

When the stock market falls, the whole country’s finances are affected. In 1929, the stock market crash was enough to drive the country into the Great Depression. With the current shaky economy, which hasn’t really recovered from the 2009 housing crash (regardless of what Obama says); so a stock market crash might drive us into a depression that would make the one in 1929 look like a picnic.

To me, this is just one more reason to not trust the mainstream media and to double and triple check any stories that come across the net. I hope that to others it is a wakeup call to tighten security, so that hackers can’t get into news sources or social media to spread false stories.

If not, who knows where we’ll end up?