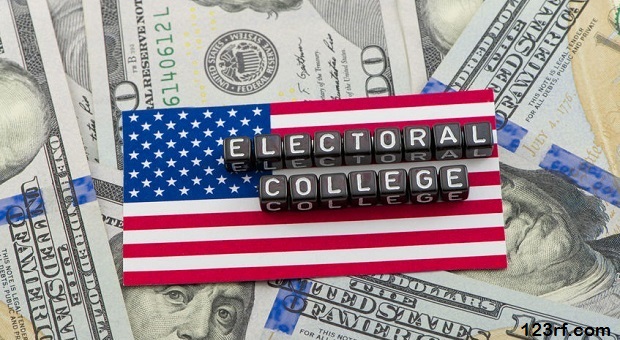 For the last 41 days, the nation has collectively held its breath, waiting for the vote of the Electoral College.

During that time, we’ve heard a constant string of excuses from the Democrat left, as to why Donald Trump should be denied the presidency, even though it was clear on November 8th that he had won the election.

Technically, the results of the Electoral College‘s vote won’t be announced until January 6th, when Congress meets in a joint session to count them.

But the results are already in and unofficially we now know that Donald Trump has officially won the election.

This presidential election has been the most controversial election ever, quite possibly in the entire history of the United States. From a field of 19 potential candidates, the Republican constituency picked a total outsider, one who had been a Democrat most of his life.

This outsider not only steamrolled his opponents in the Republican Party, but he did a fair job of steamrolling Hillary Clinton as well. Part of that can be blamed directly on the pundits, who universally held that Clinton was going to win.

In every poll and in every political report, she was far in the lead, guaranteed a chance to sit behind the Resolute Desk in the Oval Office.

Yet the mainstream media, like most other Americans, was living and working in an echo chamber. Much of their prognostication was based upon what they were hearing from other liberal reporters, pundits, poll takers and politicians. They were so convinced that they represented the majority opinion in the United States, that they failed to even look at what the people of the United States were saying; most especially, they failed to look at what conservative Americans were saying.

The silent majority has been heard from, and they picked the most unlikely of candidates, a billionaire business mogul from Manhattan.

I was never a Trump fan, but now he is my president. Therefore, I will stand and salute him, supporting him in the execution of his duties. My desire, as that of many other Americans, is that he do what is best for all Americans, unlike the president he is replacing.

If American is going to be great again, it’s time to do away with partisan politics, and go back to trying to find solutions that work for everyone. I believe that’s what Trump is trying to do.

But I can already hear the collective cry of “FOUL!” erupting across the nation. Perhaps it is so clear, simply because we’ve been hearing it for over a month now. Democrats have used every excuse in the book to explain away Trump’s win and seek out a way to overthrow the election.

Amongst the various tricks they’ve tried, has been an ongoing effort to pressure electors to become “faithless” and vote contrary to their state’s election results. While electors in many states can do this, and even have done so in the past, the people that the parties select as their electors are faithful to the party, so this effort was doomed from the beginning.

This campaign has been with constant phone calls, letters and Facebook posts to the electors. They all had the same goal, to keep Trump from getting the 270 votes he needed.

The truly crazy thing about all that effort was that even if they had succeeded in reducing Trump’s electoral vote to below the 270 vote threshold, their candidate still wouldn’t have won.

Apparently they thought that the electors would automatically vote for Clinton, raising her total vote count high enough to win. But these were Republican operatives they were calling; they weren’t likely to vote for a Democrat candidate, no matter who it was.

That’s not to say that there weren’t any faithless electors. There were. Two Republican electors in Texas chose to vote for other candidates. They didn’t vote for Clinton, but they didn’t vote for Trump either. In the end, they were insignificant. Donald Trump needed 270 electoral college votes to secure the presidency and he far outdistanced that with a total of 304 votes.

There were apparently some Democrat electors who were faithless to Hillary Clinton as well, voting for Bernie Sanders instead of her. As with the Republicans who voted against Trump, their vote was more in the nature of a protest than anything else. It didn’t change a thing, except for them personally.

The Electoral College has done what it was intended to do, once again. It has assured that the will of the people in the majority of the states was carried out. It stopped the tyranny of the majority and ensured that the citizens of all 50 states received equal representation in the presidential election.

Please note that this is clearly different than the will of the majority of the people. If all that mattered was the popular vote, then the most populous states in the Union would decide every election. We would have a one-party dictatorship, even if the actual figurehead of that dictatorship had to change every eight years.

As we saw in Hillary’s campaign, if she had won, it would have been a continuation of Obama’s policies, effectively a third term for Obama.

Yet Democrats everywhere have been crying about the popular vote, claiming that it is the only fair method of voting for a president, giving one vote per person. That complaint has been largely fueled by the fiction that Hillary won the popular election. I say it’s a fiction, because there have been three million votes discovered so far, which were cast by illegal aliens.

Of course, to the Democrats, those illegal aliens aren’t illegal and aren’t aliens. They have bought into the one world mentality, wanting to tear down our borders and allow anyone in. Part of that is allowing anyone to vote, since in their minds, there is no such thing as citizenship.

But traditionally citizenship has been defined as the right of voice and the right to vote in democratic countries. If you travel outside the United States, you have no legal standing in front of the government of whatever country you visit. You have no right to vote. You don’t even have the right to salute their flag. You are a visitor, denied the rights of citizens. That’s why citizenship is important.

Yet the Democrats would do away with that; partially to further the one-world government and partially to pad their own constituency. Democrats hope that immigrants of all types will vote Democrat, because it is the Democrat party who promises to give them freebies. It isn’t until those people become self-sufficient and are paying taxes that some of them shift over to the Republican Party.

I suppose liberals on the street will be after him as well. We can expect demonstrations, riots and all the other dirty tricks that liberals use to display their displeasure.

In other words, the election of Donald Trump has not made the United States any safer than it was before. Groups like Black Lives Matter and the New Black Panthers have become used to flexing their muscles. They will continue, quite possibly joined by other liberal “organizations” who want to make their displeasure known as well.

Oh, they won’t quit. You can be sure of that. We will hear their complaints as we watch them work against the best interests of the country. They will continue to try to impose their will upon us. But at least for the moment, they’ve lost the clout to make that will stick.