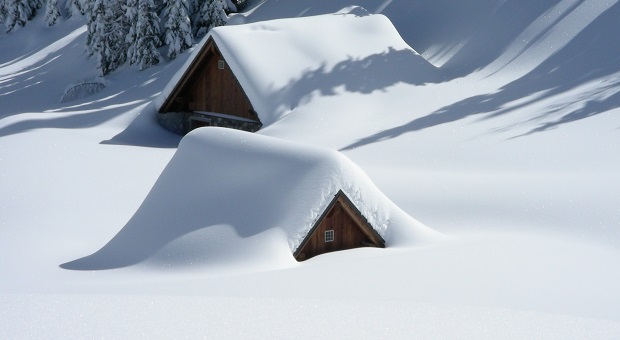 Do You Know How To Use Snow For Insulation?

It’s that time of year again – snow season. If you live in a nice, new home you may already have decent insulation that keeps your heat in and your heating bill as low as possible.

But if you don’t, you’re probably dreading those drafts. You probably try to block the drafts, or maybe you even block off entire rooms trying to keep the house warm, but how about using snow for insulation?

If you’re an avid reader of Consumer Reports, the bad news is that heating costs will sky-rocket this winter. Yes, you heard that right. Again.

In the scary side of the news, scientists now believe that we’re going to enter a mini-Ice Age, a few years ahead, due to Sun’s slowing activity. Indeed, goodbye Global Warming, hello Ice Age.

According to the Energy Information Administration, the average American household spends approximately $930 every winter on heating costs alone, and we’re talking about homes heating primarily with electricity. The figure is higher for people using propane ($1417) and lower for natural gas ($578).

Anyway, you must keep in mind that these figures are sourced for this winter’s forecast, which is expected to be very mild, milder than in the previous years. Mild or not, I bet it’s going to be very cold, especially if you’re not living in Florida.

Fortunately, there are things that can be done to mitigate the cold winter months ahead, so keep reading. I mean, regardless of the NOA predictions or what the Farmer’s Almanac says, if you can cut on your heating bill won’t hurt you, right?

A Few Survival Models to Copy

Now, if you’re the outdoors type, you probably noticed that wild animals and even stray dogs sometimes bury themselves in the snow when it’s freezing, and there’s a good reason for that.

Basically, they dig a hole in the snow and they manage to survive in that fashion even in -20 F temperatures. There are even species of animals that dig snow-burrows, where they hibernate for months, during the winter season. This obviously means that snow makes for an excellent insulator.

Also, you may be familiar with the concept of igloos. You know, those “houses” made of snow, or snow huts Inuit people are often associated with. Besides igloos, Inuit people used snow on a daily basis to insulate their whalebone/hide-made shelters. What makes snow such a good insulator?

Well, the answer is pretty straight forward: the air pockets which are trapped in the snow make it an outstanding insulator.

Why Is the Snow Working for Insulation?

To get an idea, even if the outside temperatures are as low as 19 degrees Fahrenheit, in a snow hut you can achieve 61 degrees Fahrenheit using body heat alone, provided we’re talking about a burrow, not a palace; i.e. a small fox-hole, large enough to fit you, so it can be heated sufficiently by body temperature alone.

The best snow in terms of insulation is fresh snow, because it contains a high percentage of air caught between the ice crystals. Fresh snow is basically all air, up to 95%, and that’s why it’s so light. Since the air is firmly trapped inside and it cannot move freely, the heat transfer is significantly reduced.

So, using snow for insulating your home doesn’t seem so farfetched now, does it?

That brings us to the next factoid: did you know that 10 inches of fresh snow, which is basically five to seven percent water, is the equivalent of a 6 inch layer of fiberglass insulation? That makes for an R-value of 18 (I told you about R-values in a previous article, check that out folks).

All these facts make snow the greenest insulator of them all (it’s natural, right?) and the cheapest too, because it’s like, you know, free?

Snow’s thermal conductivity, which is the scientific term that describes that R-value thing, can be described mathematically and it works in tandem with the snow density. The denser the snow, the greater thermal conductivity. So, if you want to use snow for insulation purposes, the best snow is the fresh driven/super-light-fluffy snow, as heat moves through it relatively slowly.

Also, using snow for insulating your house spells fun, especially for your kids, making it for a great DIY project.

So, you can save some of your hard earned dollars while having a good time with your family if you do it the Pioneer way, just like our founding fathers!

Just think about the concept for a minute, isn’t it beautiful folks? It makes you wonder about the old times, when people knew squat about central heating (okay, maybe excepting the Romans) and yet they managed to survive.

Yes, I know they had wood stoves and stuff like that, yet they didn’t even dream about our high-tech fiber-glass insulation. Or did they? Actually, we’ve already shown that at least some of them did. The bottom line is that when people HAVE to make due, they tend to be quite creative.

Enter snow, the all green-all natural insulator used back in the day by the common folk for insulation purposes.

How did they do it? Well, those living on farms used to drive six foot posts into the ground about 3 feet from the sides of the house, right before winter set in. After that, they used to pile straw between the house walls and the respective posts. After the first big snow, they packed the snow over the straw, creating something resembling a wall of ice.

That insulating wall stayed there until the spring, when it melted away. This ingenious yet primitive makeshift insulation really performed miracles, by keeping the winter cold out and the heat inside the house.

How to Make It Work

Now, imagine a blackout in the aftermath of a snow storm. No central heat or electric to power space heaters, and it’s going to get cold fast! You have to move the snow anyway, to clear your driveway  and the sidewalks, so while you’re at it, why not put some elbow grease into the mix and pile a layer of snow (one – one and a half foot thick) up against your house?

It will help you a lot with insulation, just by shoveling it from the roof and the steps of your house. You’re killing two birds with one stone, right? The only thing to keep in mind is when spring comes around, you’ll have to shovel the snow away.

Another idea for putting the wintery blanket to good use would be to let it sit on your roof, depending on how solid the roof is built. If it’s built properly, a layer of snow will provide you with additional insulation, for free, but in case of heavy snow-fall, make sure you don’t allow more than two feet of snow to accumulate there.

Too much snow on your roof may translate into leaks, it may damage your roof when it slides off, or it may even collapse the roof, and that, obviously, would be pretty terrible.

Snow accumulating in decent amounts on your roof, without melting in certain unusual spots, is a testimony that your attic is doing its job, meaning there’s no heat loss through the roof, due to poor insulation.

A properly insulated home doesn’t show bare patches of melted snow on the roof. Hence, beside its insulation advantages, snow will act as an early warning system.

If you own a log cabin, you can use snow for banking, to keep it warm during the winter season. Usually, log cabins tend to leak air; hence the heat escapes during the cold season. To mitigate this problem, they are chinked with mud. Sooner or later though, especially when it gets very cold, the mud falls out, leaving cracks between the respective logs.

After the first snow, you can use the snow to bank the cabin walls again. Do it every time you can, until you pile up mounds of snow against the cabin’s walls, creating your own personal igloo on top of your log-cabin. In this way, you’ll be considerably warmer inside, and if you live in a cold area, any extra degree inside would be welcome, don’t you think?

All things equal, while snow makes for an excellent insulator, don’t bet on snow alone for shielding you from the cold. I mean, what are you going to do if faced with a low snow year?

If you have suggestions or comments, feel free to use the dedicated section below!