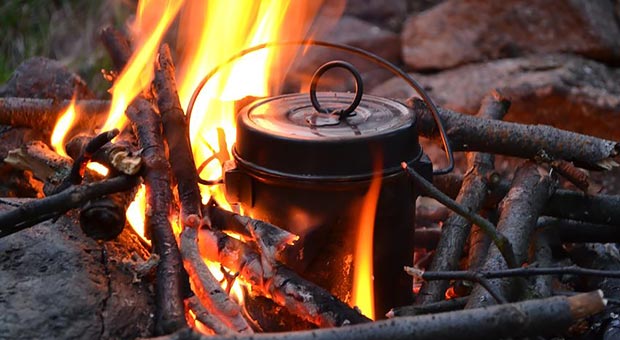 Cooking Off The Grid And Under The Radar

All of life’s little pleasures that we take for granted, like cooking and eating our favorite foods, will undergo some drastic changes when disaster strikes. Without electricity or other sources of commercial fuel, modern gas and electric stoves are nothing more than scrap metal.

To survive these times you need to know how to use alternative cooking methods that are hard to detect.  No matter whether people turn into thieves out of desperation, or you are on the run from other hostile forces, cooking under the radar will be just as important as any other tool in your survival chest.

Getting Around the Pitfalls of Open Fires

It is not a good idea to use an open fire pit in a time when you are trying to be off the grid and under the radar. In the daylight the smoke from the fire can easily be seen miles away. At night the glow of the hot coals can make the camp visible.

In addition, the large size of an open fire pit can leave an enormous heat signature that can easily be picked up by drones and any other equipment that uses thermal sensors.

If you must use an open fire pit do so in either a cave or an old mine. Both of these locations will hide the smoke and the glow of the coals. Before you move into the cave or a mine, scout it out. Locate all entrances and possible air shafts and camouflage them.

Be careful when exploring these areas, because they may already be inhabited by bears, mountain lions, bats, or other animals who may not want to share their home. If these areas are clear, you have a safe place to cook and live. 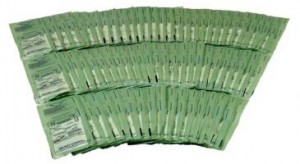 Some people have military MRIs or the civilian version in their bug out supplies.

These foods have the advantage of a very long shelf life, and some can also be consumed cold. To cook MRIs you can use chemical heating tablets.

Simply add water to the heating pouch with the heating tablet, and then put the food to be heated in the pouch. In a few minutes the food will be warm.

These tablets have limited use outside of what they were designed to do and cannot be used to start an ordinary camp fire.

Make Your Own Hobo Stove

Hobo Stoves were used during the Great Depression by poor people to cook simple meals.

A Hobo Stove is easy to make from two empty food cans and a piece of heavy gauge wire. The larger of two cans is used as the outer frame, with heavy gauge wire was attached to make the resting place for a pot or pan. The outer can has a few holes cut in it near the bottom to form a draft for the inner can, which also has holes cut all around it. The smaller can acts as the fire box.

To use this stove, just put paper or small sticks in the inner can and light it. When the fire is burning good, put your cooking pot on top of it and heat your meal.

The Hobo stove can also be used to keep you warm when the cooking is done. Be sure to use it in a well vented area.  Because the can holds the fire in a very small space, it has a smaller heat signature and also produces less smoke.

You can also put a screen or other diffuser well above the hobo stove to break up the smoke and light from the fire. 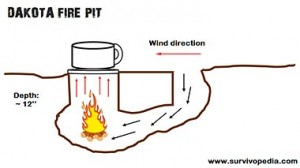 A Dakota Fire Pit is use to burn safely underground. To make this fire pit, dig two vertical shafts which are connected by a tunnel.

Then, place fire wood in one tunnel and light it. The two vertical shafts create a draft in the tunnel to keep the fire going. When you have a good bed of coals in one shaft, it is time to cook.

Put your cooking pot over the empty vertical shaft and let the heat from the tunnel cook the food. This method of cooking can be done in semi- open areas because of the small amount of visible smoke.

Also, because the hot coals are underground it is very hard to see them.

Solar Cooking With a Water Lens

Even though solar cookers do not require smoky fires, they can easily be detected because of the reflective surface on the light collector.  To get around this, attach a heavy piece of clear plastic on poles and let the center section cave in.  Pour water into the central portion to make the heat collecting lens. From there, simply place your food under the lowest portion of the plastic canopy. Using black mason jars inside an oven roaster bag will improve heat retention and speed up cooking.

To disguise the presence of this system as much as possible, use near a body of water and as close as possible to a tree line.  In this way, drones or other airborne vehicles will mistake any stray glare from the system to the water they see nearby.  You should also make sure that you set up this system away from trails or other natural pathways that other people might use to get to your area in search of food or water.

Even though heating foods is an absolute necessity, you will find it a bit challenging to cook off the grid and under the radar.

While there is no perfect method, you can use a few simple and inexpensive tools to reduce heat and visibility signatures as much as possible. Choosing those that offer the greatest mobility will also be of benefit if you are planning to travel over large distances or you know that you are going to be in a bad area.