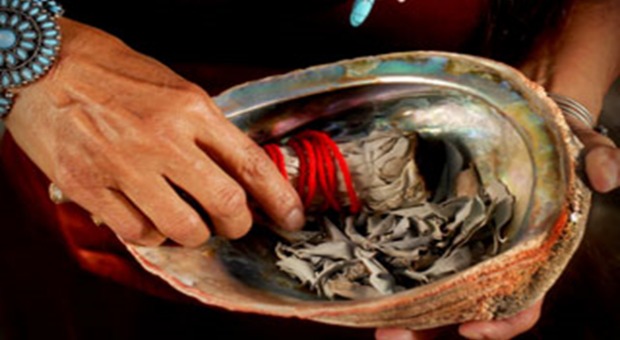 Ancient Survival Medicine That We Lost To History

Before Europeans discovered the Americas and introduced such diseases as chicken pox, the flu, smallpox, and measles, Native Americans were relatively disease-free and, for the most part, lived long, healthy lives, unless of course famine struck.

Native American remedies for existing illnesses were made of indigenous medicinal plants, many of which were highly effective.

Unlike modern medicine, sick patients weren’t just handed medicine until they either got better or died. Instead, Native Americans took care of their health holistically; it was strongly linked to spirituality.

The Native American ideal state of health and well-being was intrinsically linked to a close connection to the Earth and living in harmony with the environment.

In other words, they weren’t the “savages” that Europeans assumed that they were; I’m sure that, if they had the European desire for progress and financial gain, the Americas would have been vastly different than they were when Columbus found them. Instead, they believed that natural balance must be maintained. Life was about coexistence, not the almighty dollar.

But, if you take a look at what they actually did to maintain that balance, you may be surprised to find that their methods coincide with what modern medical practitioners preach on a daily basis.

Many tribes greeted the dawn with an early morning run to celebrate the arrival of a new day. How many people do you know that run in the mornings (or at some point during the day) as part of their exercise routine?

Of course, along with the physical exercise they also benefited from the release of stress-releasing hormones that we now know comes from physical exercise. Since running was, in large part, spiritual, there was also surely the clarity of mind that comes with meditation.

Oh, and we can’t forget that regularly carrying animal carcasses, curing hides, carrying water, setting up and tearing down camps, and participating in ceremonies and games that centered on acts of physical strength are all examples of strength training in its purest form.

The Native American concept of fast food was eating berries, fruits, and nuts as they picked them. They didn’t typically gorge themselves unless it was a celebratory feast and the only chips they had were possibly buffalo chips – depending on location – that they used to start a fire (or possibly create a home remedy).

Everybody now is preaching that free-range, organic, hormone-free meat is the only healthy option. Well guess what – the Native Americans were already following that diet. They treated sick animals in the same way that the treated sick people – herbally.

Either that or they just put them down and maybe ate them, depending on the illness or injury. Plus the animals weren’t ingesting grass poisoned with artificial pesticides and other chemicals.

Nuts and seeds were rich in Omega-3’s, high in good fats and low in bad fats, so they had that covered, and the berries that they ate, again, had no pesticides or chemicals. And lest we forget, they had to work for their food, so they were naturally exercising every day of their lives.

Until less than 100 years ago, diabetes was practically non-existent in the Native American population, until they began to adopt the eating habits of other Americans. 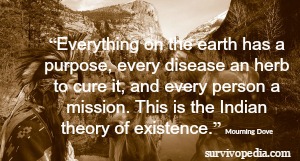 We now know that mental health is critical to physical health.

Native Americans regularly meditated and practiced acts of gratitude for everything that surrounded them.

As some modern philosophies teach, they were present and mindful. They celebrated the seasons and the bounty, and they were grateful and respectful to the animals that they killed to sustain themselves.

In a nutshell, Native Americans had a healthy outlook on life and worked regularly to maintain that. They knew, without an advanced medical degree, what it took to stay healthy.

For every illness, there’s a cure. At least in theory. Though Western Medicine hasn’t managed to find cures for many diseases, Native Americans had treatments for just about everything, and if you pay attention to early American writers, they often worked.

Just because a cure is natural doesn’t mean that it doesn’t work as well as modern medications; in fact, the opposite is often true.

As preppers, we realize that we may not always have access to OTC and prescription meds so, considering that, we’ve put together a special report on Native American remedies that teaches you how to use the eight super-plants that treat more than thirty diseases. You’ll also learn how to help your body stay healthy and heal itself naturally, and how to preserve your food without refrigeration or electricity.

Click here to subscribe to Survivopedia’s newsletter and get this month’s FREE REPORT to find out more about our ancestors’ natural healing secrets.

In general, their naturally healthy lifestyles prevented many diseases, but some did exist. Plus, you have to consider injuries such as broken bones, open wounds, and infections.

When treating any medical condition, the knowledge of the tribe healer often saved the day with a combination of treatments.

Throughout the generations, natural remedies were handed down from one healer to the next, and it seems pretty likely that the entire tribe knew how to use herbs, plants, seeds, and roots for healing, too.

These ingredients, alone or combined, were used to make poultices, teas, decoctions, salves, and oils that worked in conjunction with other holistic methods described above.

Also known as medicine lodges, sweat lodges were often used for healing, prayer, introspection, and purification. Sweat sessions were required to be supervised by trained elders who were experienced with the process and could safely control the situation in case somebody became ill or uncomfortable.

Many holistic healers believe that sweating purifies the body by flushing toxins from the body and may help kill disease by raising the body temperature to a point that bacteria and viruses can’t survive. That is, of course, theoretical, but it makes a certain amount of sense.

Remember that knowledge is the only doctor that can save you when there is no medical help around you.