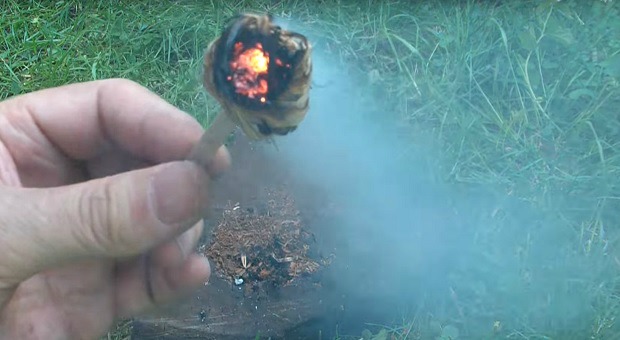 Starting a fire with your bare hands may sound like the manliest activity you can do, doesn’t it? Bear Grylls has a couple of episodes about how to start a fire without any gear available, for cooking some crunchy worms, right?

I am kidding, of course, but knowing how to start a fire in a survival situation is a pretty useful skill to have. Without fire you can’t cook your food, you can’t get warm, you can’t dry your clothes, you don’t have light, you can’t signal your presence, you can’t disinfect water for safe drinking, and so on and so forth.

We rely on technology to survive; even when it comes to wilderness survival. We are comfortable thinking that it will be OK because we have a cool survival knife, even better than Rambo’s, not to mention our top of the line survival/emergency kit, which contains all the things we’ll ever need if SHTF, including some cool BIC lighters, impermeable matches and what not.

However, life has the unpleasant habit of ignoring our plans, and emergencies don’t seem to care about our personal inconveniences.

The question to be asked and answered is — what are you going to do if SHTF and you don’t have your survival gear on your person?  Well, you’ll have to improvise or die trying, right?

This scenario is pretty far-fetched at first glance; I mean, finding yourself alone and close to butt-naked somewhere in the woods, without any type of gear and all that jazz.

Find out how this little survival stove that fits in your pocket can save your life!

Fire is what separated the humans from the animal reign, along with the invention of the wheel and Facebook. (I’m kidding again, of course!)

But I can bet that even the invention of the wheel was somewhat related to fire, i.e. there are “cultures” in remote parts of the world who didn’t invent the wheel, but they know how to make a fire without a Zippo lighter. The idea is that if some troglodyte who still lives in the Neolithic period, technologically speaking, can make a fire using what’s naturally available, so should we.

And obviously, making a fire with minimal gear that you can do yourself will require a paleo approach, i.e. we’ll have to see how primitive cultures mitigate this problem.

As far as primitive fire starting goes, most of the methods (all of them actually, if I come to think about it) involve the 2nd law of thermodynamics, and I am talking about mechanical energy — friction in our case — which is converted into heat, another form of energy which leads to fire and a happy ending.

So, as the Greek philosopher and inventor Heraclitus said back in the day, everything changes, and so does energy. But enough with philosophy and let’s get down to business.

How To Start a Fire Using Sticks

The simplest method for making a fire via friction in dry climates is the hand drill. The concept is pretty simple: you’ll have to cut a V shaped notch into a piece of wood, or fire-board if you like, then to use a rock/knife or whatever you have at your disposal for making a small depression adjacent to the notch, where you’ll place a piece of bark which will eventually catch the ember and burst into flames.

In the next step you’ll have to put the spindle (a stick basically) in the depression and roll it vigorously between the palms of your hands. You know what I am talking about. You’ve seen endless “Wild Survival” documentaries about it.

Some tried it in real life and failed miserably, but this guy seems to have got the hang of it.

It’s worth mentioning that two persons can do it better, i.e. one person will apply downward pressure to the drill constantly, while the other will use a shoelace or a piece of string to rapidly rotate the spindle.

How to Start a Fire by Friction

Check out this guy who makes it all look very easy. Watching this clip, you’ll learn how to make a cord drill first, then to upgrade it to a pump drill (this can be used for making holes in things, which may prove useful). The cord drill is a spindle featuring a flywheel attached basically and it works very well for making fires and more.

How to Start a Fire With the Fire Plow Technique

Another primitive method for making fire is the fire plow technique. The concept is pretty straightforward, as you’ll cut a groove in a soft piece of wood, which will be the fire-board for all intents and purposes, and then you’ll rub/plough the tip of a harder shaft up/down the groove.

This technique produces its own tinder as the sticks rubbed together will push out tiny particles of wood ahead of the friction.

How to Start a Fire With a Fire Piston

Here’s a cool method called the Fire Piston and it works under the principle that air gets very hot when compressed at high pressure.

If you’ve ever used a bicycle pump, you might have noticed the heat that is created in the cylinder. When you compress air inside a fire piston, it happens so quickly and efficiently that it can instantly ignite a piece of tinder placed at the end of the piston.

Ancient methods of making fire pistons involve hardwood for the tube or even a horn. The tube must be closed at one end, accurately bored and very smooth inside. The gasket can be improvised from fiber or leather for creating a seal for the piston in order to get the compression required.

How to Start a Fire With Flint and Steel

A classic in the field of ancient fire making is flint and steel. If you strike a softer steel against flint (which is harder), you’ll produce sparks to ignite your fire. But you can also make fire with just what’s available out there, i.e. flint, marcasite, pyrite, fungus, grass/leaf and quartzite.

Remember that fire provides you with a cooking flame so knowing how to start one with your bare hands will make your survival cooking easy as 1, 2, 3!