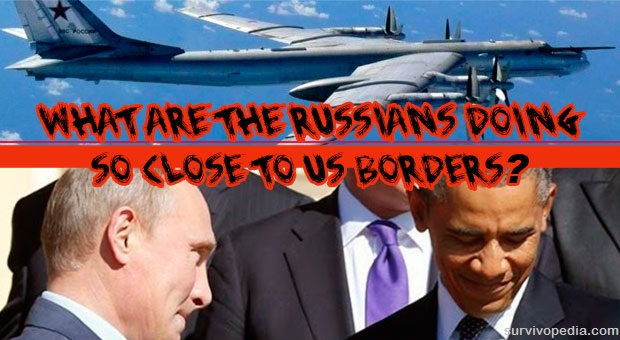 What Are The Russians Doing So Close To US?

You don’t hear much about it anymore, but the Russians are still in the Ukraine. Their annexation of the Crimea is now a foregone conclusion and Ukraine is forced to accept it. Obama’s light slap on Vladimir Putin’s wrist wasn’t even noticed, let alone slowing down any Russian military action. If anything, Russian activities in the Ukraine have increased.

Last month Russia has moved more troops, more artillery and more tanks into the Crimea, making moves that appear to be a threat to take over all of Ukraine. This seems to be part of a greater strategy, one in which Russian will regain many of the countries who were part of Eastern Europe.

There have been overtures on Putin’s part, showing that he has greater plans than just taking over the Crimea. In a conversation with Germany’s Chancellor, Angela Merkel, Putin said, “no matter what you do during the wedding night, you’ll be fucked anyway”.

While he said that it was a joke, and a rather crude one at that, it could very easily be taken as a threat against Germany. Russia and Germany are longstanding enemies, going back to before World War II and Germany’s attack on Russia. Could Putin be planning retaliation for that war?

With Russia’s recent military actions, East/West relations have reached new heights of tension, the likes of which we haven’t seen since the end of the Cold War. After the financial collapse of the old Soviet Union and Russia throwing off her communist ties, East/West relations have been rather amicable. But since the rise of President Obama to power in the United States and President Putin in Russia, things are going downhill again.

Small Steps to the New Soviet

Vladimir Putin is a strong leader, who appears to look back longingly at the days of Russia’s power as the center of the Soviet Union. Ever since Stalin’s time, the only thing that has kept Russia in check to any extent has been American military might. Yet, you can’t count on yesterday’s might to fight today’s battles and Obama is busy dismantling our military and culturally changing it into a politically correct, neutered social experiment.

{adinserter emp}Putin has even reminded the world that Russia has the world’s largest supply of nuclear weapons. Yes, they surpass us in this strategic category, thanks to liberal politicians who are convinced that nukes in the hands of our military are a threat to world stability, but in the hands of the Russian military are tools for world peace.

They gave away the strategic superiority we held during the height of the Cold War, in order to reduce the “overall risk to the world.” Looks like Putin has shown the lie in those beliefs.

Recently, Russia has announced that they will begin reconnaissance (read that “spy”) flights into the Gulf of Mexico. This didn’t even happen during the Cold War. Since I seriously doubt that they have any true interest in Mexico’s military might, these flights are clearly a political/military statement directed at the United States.

This is an old game. During the Cold War, both the United States and the Soviet Union sent ships and planes around the world, making a “show of force” and spying on each other’s military capability. Since the fall of the Soviet Union, that effort has largely been a unilateral one on the U.S. part. But now, once again, the Russian fleet and Russian Air Force is showing their might off to the world, letting the world see that they should fear the Russian Bear once more.

While our “official stance” on such activity has always been that the seas are free for the passage of all, we held that stance for our own benefit, more than that of other countries. When other countries sent ships and planes close to U.S. shores, you can be sure that they were shadowed, with our military forces watching their every action.

So, where does that leave us now? Perhaps in one of the most dangerous positions in world history since the end of World War II. At the very time when the United States, who has acted as the world’s police and maintainer of the peace, is backing down militarily, Russia is kicking their worldwide military operations up a notch.

At the least, it appears that they are filling the power vacuum that Obama has created. At the worst, it could be the signs of a new Cold War, one in which they hold the upper hand.

Liberals probably don’t see this as a problem, and I’m sure that Obama doesn’t. After all, it seems like his goal is to destroy America as a world power. What better way than to allow Russia and China to become more powerful than we are?

For some reason, the liberal mind sees out military as evil, attributing their every action to being an attempt at world takeover. Yet history has shown that the United States is the only country that frees and rebuilds countries that it conquers. Since World War I, the best thing that could happen to most impoverished countries is to lose a war with the United States. That would bring them billions of dollars of aid.

The question we have to look at now is what’s going to be the result of all this. Obama has two more years in office, assuming he obeys the law enough to get out when he’s supposed to (a doubtful proposition). I’m sure that Putin knows the date Obama leaves office as well as any conservative who is counting the days.

The difference is, Putin probably sees that as the amount of time that he has left to act, before the United States gets a president who will stand against him. He must act in those two years.

Of course, if Hillary wins the 2016 presidential election, which is a very real possibility, Putin will have at least another four years to rampage through the world, throwing his weight around. That could be disastrous. Given that much time, he might be able to largely rebuild the old Soviet Union, and by then, we wouldn’t be able to do a thing about it.