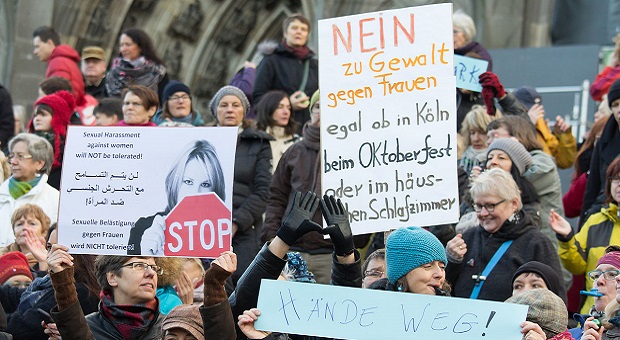 The Rise Of Rape And Islam

The massive influx of supposed “refugees” into Europe is having a number of unexpected consequences. Perhaps the liberal politicians who agreed to their invasion were thinking these refugees would be like others, act like others and be grateful like others. But what they’ve gotten is far from what anyone could have expected.

Not only is it clear that terrorists have infiltrated the ranks of the “refugees,” as proven by the Paris terrorist attack, but it’s also clear that the rest of the “military age men” who make up the majority of the influx are determined to change Europe into what they want it to be.

On New Year’s Eve, about 1,000 of these men gathered together at the central train station in Cologne, Germany (there’s also a Cologne, France, but this happened in German) to give a special present to the women of the city.

As the women passed, they were groped and sexually assaulted by the immigrant men. Some were robbed, under the covering of the distraction caused by the groping. A few were even raped.

This didn’t just happen in Cologne, but in Hamburg and other cities as well. But Cologne was the epicenter, with more than 800 women molested by these Muslim men. Many of the attackers were drunk, ignoring their religion’s probation of alcohol in favor of enjoying themselves.

We can’t even say that this is an isolated event, as I hear daily of new rapes and gang rapes happening throughout Europe. While rape has always existed and will probably exist until the end of time, what is happening now has not happened on this scale since the wars of the Middle Ages. While rape has always followed war, this is something new; using rape as a tool of war.

One More Insult to Injury

Sweden has become the rape capital of Europe and perhaps of the world, if we leave out the lands controlled by ISIS. The Muslim immigrants apparently feel they have a right to any woman who they see. This matches the teachings of their Imams and the Quran, which states that all lust is caused by women, it is not in the heart of the man. Therefore, the women are the ones who cause it.

The Imam of Cologne has even come out and said this, declaring that the sexual abuse and rape were the fault of the women, “walking around half-naked and wearing perfume.” He literally said that they should have expected it. But then, we have to realize that to these Muslim men, seeing a woman’s ankles makes her half-naked in his eyes. When all they ever saw in their homelands were women hidden by black cloth sacks, it’s no wonder that the sight of real women would excite them.

Now, I’ve got to say that modern styles for women’s clothing isn’t exactly modest. But that’s not the issue. If those women had been wearing floor length dresses, with long sleeves and high necks, it would still have been more than they could stand. Simply having a dress that actually fit and showed that the woman’s body had curves would have driven those men mad, especially in their drunken state. But such is Islam, that they blame the women for the faults of the men. That means that as long as there are Muslim immigrants, the chances of rape will be high.

A video has recently come out in which a female Muslim college professor explains that rape of non-Muslim women is acceptable in the Islamic religion. It is to be used as a means of humiliating the women, with the ultimate goal of forcing them to convert to Islam. There’s even a reference to her being converted by the sexual act. Her specific statements refer to raping women captured in war, but the invasion of Europe is a war in Muslim eyes.

According to the Quran, Muslims aren’t allowed to immigrate to infidel lands and put themselves under the authority of infidels or their laws, that is sin to them. When they go to other lands, and they are commanded in the Quran to do so, they are to go there and take the position of being the heads, over the people of the land. They are to take over the lands and subjugate them to Sharia Law.

This is called hijrah, and it is as old as Islam itself. The first hijrah was when Mohammad himself left Mecca to go to Medina. He and his followers went there for the purpose of conquest, to take the city over and force it to convert to Islam. This was the beginning of hijrah as a means of jihad and Muslims have been used ever since to conquer new lands and expand their territory.

The Trojan Horse of the Syrian refugee crisis isn’t just the terrorists who are hidden in their ranks, but each and every one of the Muslims who are emigrating. It doesn’t matter if they are radical Muslims or not, nor does it matter if they are terrorists. They are all committed to the spread of Islam and they are using this as an excuse to send millions of people into the western world for the purpose of conquest.

That may seem ridiculous to you, stating that such a small group could conquer a nation, but you have to understand their tactics. They have already taken over areas of several European countries, making them into “no-go zones.” Those areas are totally under Muslim control and governed by Sharia Law. The police and the duly elected government has no power and no say. They have effectively been kicked out and the area has effectively been conquered.

That’s been done with relatively few people, mere thousands. What will happen when there are millions? How will those governments stand against Muslim pressure, when the Muslims know exactly what buttons to push, in order to get things their way?

Muslims are winning the propaganda war. They are using our laws and our sensibilities against us. A mere 15 years after 9-11, they’ve managed to paint themselves as the most misunderstood and most persecuted minority in the world, with the greatest amount of prejudice against them. That’s a load of crap. Muslims account for 23% percent of the world’s population, 1.6 billion people. They are far from a minority.

Yet Islam is a hungry master. The Quran commands them to take over the world and they are going to do everything they can to do so. Those whom we call “moderate Muslims” are the ones who will do it. The radicals, who become terrorists, don’t take over the world. They just threaten the world so that we’ll be quiet while we’re being raped. It’s the moderates who take over cities, make no-go zones and demand that laws and customs be changed to accommodate them.

The rape that is going on in Europe isn’t going to stop. About the only thing that can save Europe right now is for the people to rise up in arms and throw the Muslims out. But they aren’t allowed to do that. In most European countries, it’s illegal to own firearms. That doesn’t stop the Muslims or the criminals, but it does stop the law-abiding citizens of those countries from defending themselves.

Yet, they are trying. German men have turned out in droves and organized to protect their women. How did the government accept that? They sent 1,500 police to the rally where the men were organizing. There were only 150 in the vicinity of the train station on New Year’s Eve, and they didn’t do a thing to stop the sexual molestation, but they sent 1,500 to a protest against that attack. What does that tell you?

These sorts of attacks are going to increase. While they are mostly in Europe right now, we can soon expect to see them here on our side of the pond. As Obama allows more and more of these animals into our country, we must keep in mind that they have not come as refugees, they have not come as immigrants, they have come as a conquering army and as far as they are concerned, they’ve already won the war and our women are the spoils of that war.

This is what we can expect to face. As unpopular as Trump’s declaration about closing the doors to Muslim immigrants has been, it’s the only real answer. Something has to be done to determine if these people are going to assimilate into society or not; and those who won’t, have to be kept out of the country. Otherwise, they will take over.

Of course, there is one other option… that of civil war. It may come to that. But if it does, it will have to be because the Muslims start it. If we, the American people, start killing Muslims out of hand, we will be giving up the high ground and become something we are not.