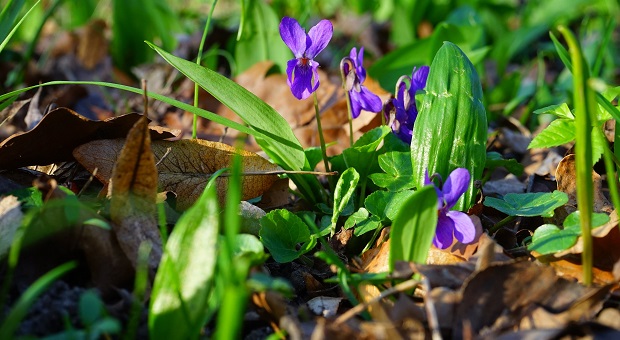 10 Spring Edibles To Look For In Your Backyard

Are you tired of cold temperatures? Can’t you stand the freezing anymore? Hold your horses, spring is almost here! And with it so are a lot of plants that will invade your garden. But don’t hurry to get rid of them! Some pack a lot of nutritional properties as well as medicinal benefits. So let’s take a look at 10 of them. 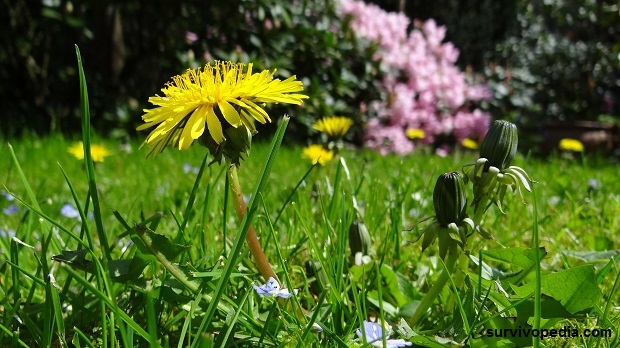 There is no way to miss it and it’s sure to be in your garden. Some people consider it invasive, while others are allergic to it because it contains inulin, but dandelion is still one of the most common spring edibles.

Pick the leaves for use in salads, soups, and tea. Use the flowers to make the sweetest dandelion honey (actually it’s a syrup, but the resemblance is so obvious that it doesn’t even need to be explained). Don’t ignore the root: it’s used as a coffee substitute if roasted, and also for medicine. Dandelion is also used for treating liver disorders, urinary disorders, muscle aches and other types of pains, and even for skin care.

Dandelion can be helpful for diabetics by lowering blood sugar, but using it along with your treatment requires special attention as it could be dangerous. 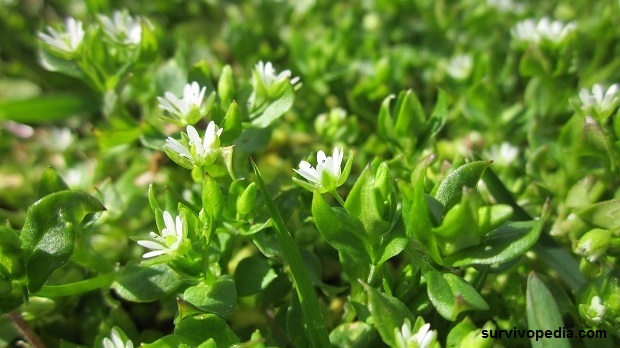 Although it’s pretty difficult to get rid of it, due to its heavy seed sets, after reading this you might not want to anymore. Chickweed has several other related plants, but since those lack nutritional benefits, it’s important to be able to tell them apart. Chickweed is the only one that has fine hairs on only one side of its stem, in a single band and on its sepals, as opposed to its relatives who have the stem entirely covered in fine hairs.

Now that you know how to recognize it, let’s see how it will help you. Chickweed is a nutritious leafy green, usually used raw, in salads. Its leaves and flowers are also used in cooked goods such as stews and soups. It has a high content of iron, so it’s recommended in iron-deficiency anemia. It has also been used as a remedy for skin diseases, bronchitis, rheumatic, arthritis and menstrual pain. Fresh chickweed leaves are also turned into a tea that’s recommended for obesity, but also in spring cleanses to detox your body. 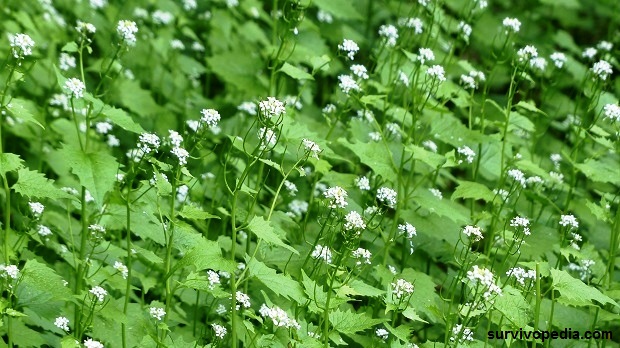 Thought of as an invasive plant, this little garden gem is edible from roots to flowers. You just have to pay attention to when you eat each part of it. Roots are at their best in spring and autumn, when they can be harvested and turned into a spicy mustard. The leaves get bitter in the summer, so they’re perfect in cooler periods and can add a lot of flavor to any salad or pesto. Flowers are a great addition to your salads. The fruits and seeds are used as well in order to add flavor and season dishes.

Garlic mustard has also been used for medicinal purposes as a disinfectant and a diuretic, as well as in order to help wounds heal. 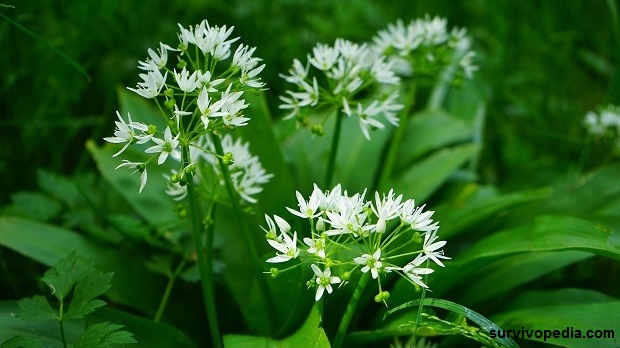 This wild relative of chive packs a lot of flavor in its edible leaves, which can be used raw in salads or cooked in soups and pesto. However, the stems, bulb and flowers are also edible. The plant is also used to prepare herbed cheese, plus, when used as a fodder for cows, they will give milk with a slight garlic aroma that will make for a very tasty butter. 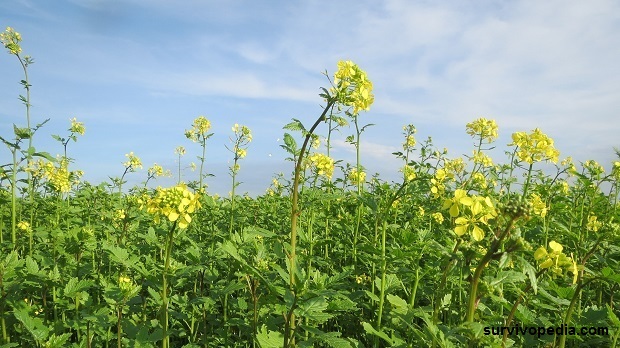 This wild mustard is so widespread all around the world that you would have to live in the desert in order not to have it grow somewhere near you. The leaves are edible and mostly used in salads, as they have a cabbage-like flavor, though they are coarser and some find them indigestible. The roots are also edible, most of the time they’re cooked, but some like them grated in salads, as they resemble radish in flavor. 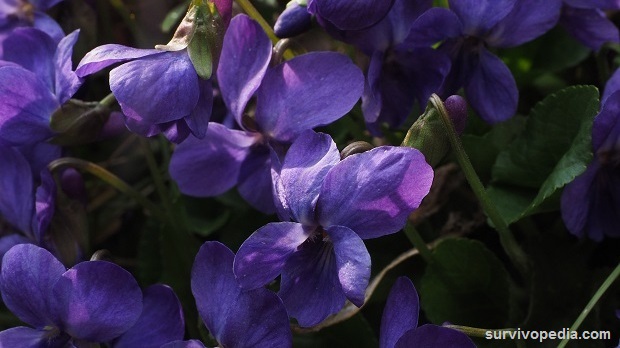 These pretty little flowers are not just adorable in spring bouquets, but also a good food source that easily grows in your garden. The leaves have a mild flavor and can be eaten raw or cooked, while the flowers are flavored and a bit tart and are mostly used as food decoration. The flowers are also used in poultry stuffing and essence of violet flower is used to flavor deserts such as soufflés and creams. 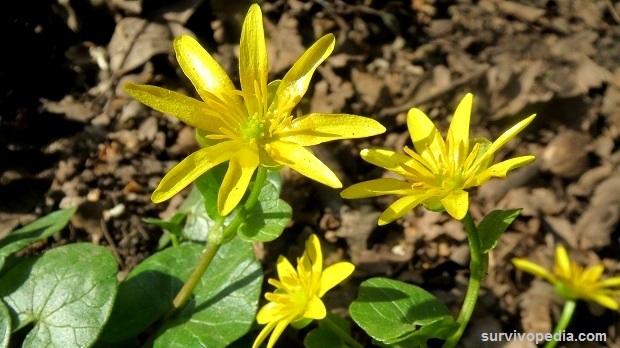 You’ll find it especially on wet sandy soils, in both shaded woodlands, and open areas. It’s a great source of Vitamin C, but use it before it flowers and make sure to dry it or cook it before eating it as it contains a toxic compound that is destroyed by heat.

The plant was used to treat hemorrhoids (raw leaves ointment), scurvy (due to its Vitamin C content), while dried leaves are used in teas for their antispasmodic and analgesic properties. 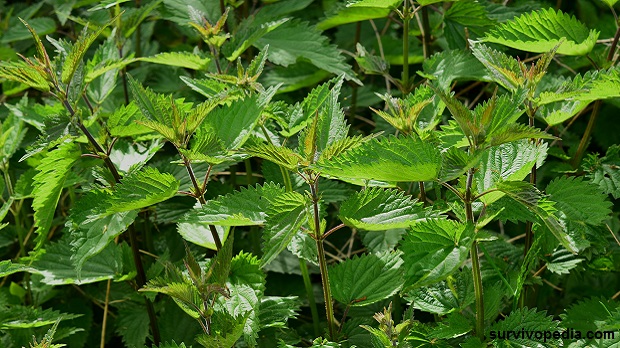 If you allow it, stinging nettle will grow everywhere in your garden, but since it’s a great nutritious and medicinal plant, don’t hurry to get rid of it! It packs a lot of great stuff such as vitamins A and C, iron, potassium and calcium, but you should cook it first to remove the stinging chemicals. You should also harvest it before its flowering and seed-setting season, because after this stage it contains substances that irritate the urinary tract.

It’s usually eaten in soups, purees, and polenta, or used in pesto, and it’s also used in tea to treat afflictions in the kidneys and the urinary tract, gastrointestinal tract, locomotor and cardiovascular system, on the skin, for hemorrhages, influenza, rheumatism, and gout. It is thought to help with lactation and raw leaves are applied locally to provoke inflammation in order to treat rheumatism. 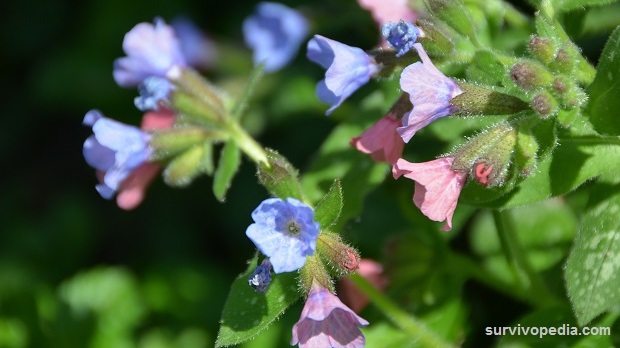 This plant has been cultivated as a medicinal plant for hundreds of years, so if you see it sprout it your garden you should make good use of it. Its leaves can be eaten raw in salads or cooked, but it’s mostly used in teas or tinctures for its medicinal properties.

It’s proved to be efficient in treating chest diseases and asthma. It is also useful in stomach and intestinal ailments, kidney and urinary tract conditions, as well as wounds when applied to the skin, tuberculosis, etc. 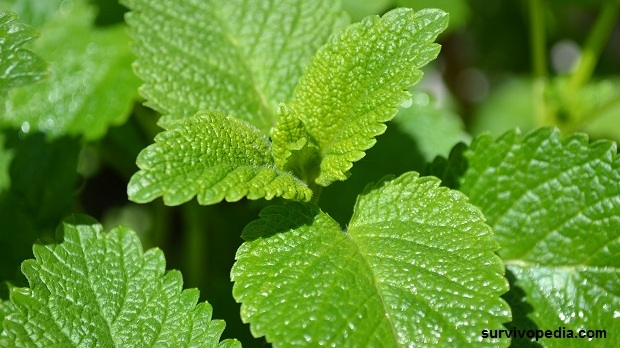 Lemon balm flowers can be eaten raw and the leaves are edible both raw and cooked. It’s also used in flavoring ice cream and teas and it goes great in fruit dishes as well as in fish dishes.

These are 10 of the most common spring plants that you can always use for their nutritional and health benefits. If you think of any other plant that didn’t make it to our list, please use the comments section below to share it with us!