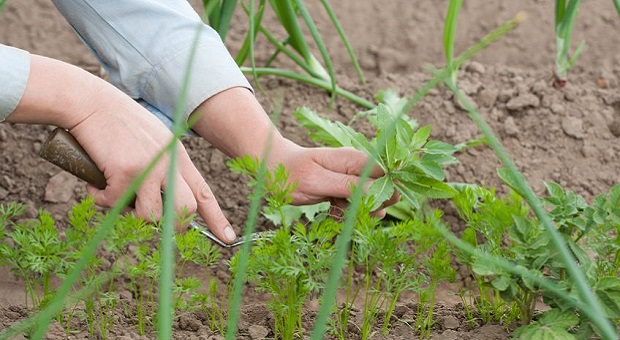 The more we learn about herbicides and pesticides, the more we realize that they’re REALLY bad for both us and the environment.

However, you can’t just let the weeds take over either. They’ll steal all of the moisture and nutrients from the soil and your plants won’t thrive.

What’s the alternative, though? Is there such a thing as natural weed control for your garden? Yes there is!

Yeah, I know. Pulling weeds is hard work and in the beginning it’s tough for beginning gardeners to tell the difference between small plants and weeds. However, pulling weeds is the most effective way of getting them out of your garden. [adinserter name=”megadroughtusa”]You need to be careful that you get the plant and the root or else you’re just wasting your time.

Don’t just leave the weeds laying there though; they may have seeds that will fall out and quadruple your problem. Instead, put them in a wheelbarrow, garbage can or bag and dispose of them away from the garden.

For weeds that are hard to pull, use a hand garden spade or a screwdriver to dig down in and loosen the soil. It’s also easier to pull weeds after you’ve watered the garden or after it’s rained.

If you want to keep your garden weed-free, lining it with newspaper, mulch or biodegradable film or fabric is the way to go for nearly maintenance-free weed control. You can put it down after you plant but the easiest way to do it is to cover your garden with it before you plant your plants. Find out how to make your own organic mulch here.

After you lay it on your tilled soil, cut and X everywhere that you want to put a plant, pull back the material, and plant your plant. I personally prefer either the film or the fabric. Both are organic and biodegradable and are much easier to work with than the newspaper.

Pouring boiling water on weeds will kill even the hardiest plant. You don’t have to waste water to do this; use pasta water or any other water that you’ve boiled for some other reason. When you’re doing this, be careful not to get the water near your plants because it will kill them too.

Believe it or not, cornmeal is a natural weed birth control. It keeps seeds from germinating but you need to be careful; it keeps all seeds, not just weed seeds, from germinating. Be sure that your plants are well on their way before you sprinkle cornmeal around your garden.

Just sprinkle it around your garden lightly and watch as weeds don’t grow! Your best bet is to weed your garden before you do this because the cornmeal won’t kill the weeds.

Vinegar is a natural herbicide but, like boiling water, it will kill your plants as well as the weeds so be careful not to get any on your plants. Spray it on your garden when there’s no wind. Do it on a cloudless day because the weed-killing properties are activated by the sun. You don’t want rain to wash away the vinegar before it works. Get our homemade vinegar recipes here.

Apply as needed. Since vinegar only kills the part of the plant that it contacts, make sure that you spray each weed well.

Salt is a wicked weed killer; as a matter of fact, when you use it, the soil is uninhabitable by any plant for several months. Personally, I only use this along my sidewalks where I don’t ever want anything to grow because of this. If you decide to use salt as a natural weed killer in your garden, put just a pinch at the very base of the plant.

Some people use a combination of vinegar and salt with great success. Just mix a couple of tablespoons of salt into a gallon of vinegar, shake to combine, and spray onto the weeds.

Hanging baskets, edged raised gardens and window boxes are great ways to keep weeds at bay. They’re not always 100 percent effective but they do greatly reduce the amount of weeds that can get into your garden.

The great thing about this plan is that you can use reclaimed items such as lumber and cinder blocks to make your edging. Simple window boxes or ground edging can be made just by nailing the boards into a box shape. If you’re making a window box, use more lumber to build a bottom.

Make it a Battle of the Plants

Plant groundcover, thick crops and flowers to choke out the weeds. Plants compete for moisture and nutrients and if you simply outnumber them with “good” plants, you can control them to a certain extent. This works particularly well when combined with the mulch method or even the boarder method.

Many people are under the mistaken belief that dish soap kills weeds. While you’ll often see it as an ingredient in homemade weed killers, dish soap doesn’t actually kill the weeds. What it does is act as a surfactant; it helps spread the other agents, typically vinegar or vinegar and salt, onto the plants more evenly.

Remember that dish soap isn’t organic; it usually contains chemicals that are too long to pronounce. Though they’re typically not considered dangerous, if you’re using them on food plants then it’s something to keep in mind.

If you’d like to add dish soap, though, it does have another benefit besides acting as a surfactant: it kills many harmful bugs. Be careful though because it does kill good bugs, too. To read more about good bugs, check out my other articles.

Use a Weed Torch

This is something that I’ve never used but I’ve heard a lot about them. They operate on propane and work because the water inside the cells of the plants heat up, boil and explode, thus destroying the plant. You don’t have to completely burn the weed; you just have to wilt them and nature will do the rest.

Controlling weeds without using harmful chemicals is tough but it’s worth it when you consider how awful herbicides are for you. Many of them have been linked to cancer and birth defects and they stay in the soil and can leak into water supplies, thus effecting way more than just the weeds that you’re spraying them on.

I’ve found that using several of these methods in conjunction works best. Vinegar is definitely in my repertoire and I use salt around my walks and in the cracks in my driveway. Window boxes and raised beds are also great. By the way – if you use raised beds it’s much easier to weed if you have a bad back because you don’t have to bend so far. Mine are fairly high, though.

If you have any more suggestions for natural weed killers, please share them with us in the comments section below!