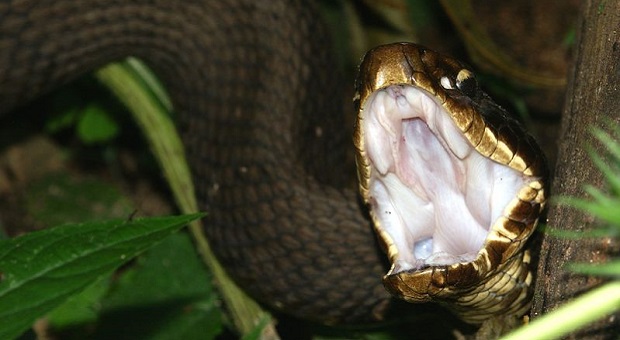 4 Snakes To Beware Of In American Wilderness

Snake in the grass!

Almost all of us have a natural repulsion when it comes to reptiles and especially snakes. Why is that?

There’s actually an area in our brain named “reptilian brain” and this relatively small portion of the limbic system is responsible for “flight or fight” reactions, i.e. the reptilian brain takes over when SHTF and we act on instinct rather than using rationale.

It’s called that because it consists of the main structures found in a reptile’s brain; the cerebellum and the brainstem. Ironic, no?

The fear of snakes is so common among humans that it has its own name: ophidiophobia. I bet you did not know that!

Yes, some snakes can be dangerous creatures if they feel threatened and the best way to deal with them is to avoid confronting them in the first place.

Fortunately, most snakes fear humans too and typically on the rare occasions when they attack us, they’re doing it out of necessity (they feel threatened) and they’re just trying to stay alive, to survive, like any other creature on this planet.

It is true that some snake species are more dangerous than others, being aggressive and all that, but most of them are not and even the “dangerous” species are not inherently evil. The ones that attack do so because they view you as a threat or a food source.

The Good, the Bad, the Weird

Snakes are actually very important for the ecosystem, as they’re natural predators for all sorts of pests; without snakes, the vermin population would explode. By vermin I refer to rats, mice and all sorts of insects and pests that would destroy our crops in the absence of their natural enemies.

[adinserter name=”megadroughtusa”]I agree, snakes look weird and they might act funny: they have no legs, nor hands, they can eat prey that is way bigger than their own heads (they have a special jaw with an elastic cartilage).

Sometimes they kill their prey with the venom found in their teeth though not all snakes are venomous. Other snakes kill prey by squeezing them and others just catch bugs and such from the air or on the ground and swallow them.

Rest assured though; despite their bad reputation, death by snake bite is a rare occurrence in America, and I’m not trying to make you feel better or safe; these are the hard facts.

To understand the big picture, just 12 deaths per year are attributed to snake bites in the US and that’s a very small number, since snakes bite an average of 45,000 people per year. Only 18% out of 45,000 are bitten by venomous snakes and only 12 people die because of that unfortunate incident.

As you can determine by looking at the numbers yourself, snakes are hugely over-rated as a threat for humans.

I’m saying that because way more people die from allergies or adverse reactions to medicine than from snake bites; however, if you’re the outdoors type or in a survival situation you should know everything about the venomous species of snakes that are to be found in North America.

Where the Danger Lies

There are thousands of snakes in the US but only four species are venomous and dangerous to humans. Each of the respective species has sub species etc. but the most important thing to remember when dealing with snakes is live and let live. Don’t mess with them and don’t provoke them and generally you’ll be fine.

Keep out of trouble and no trouble will come to you, or at least that’s what they say (there’s at least one exception to that rule).

For instance, the rattlesnake is known for striking passersby without provocation or warning.

That means that you should avoid sleeping in dense foliage or next to fallen trees or large rocks, which are snake territory, generally speaking. Because they are reptiles, they can’t control their own body temperature and must seek shade when it’s hot. On the other side, they must seek warmth when it’s cold and sleeping bags are incredibly cozy!

Now, let’s take a look at the main types of venomous snakes that are common in the US. Quick survival fact for outdoors enthusiasts: there are basically two kinds of poisonous snakes that can threaten humans.

The first are snakes with hemotoxic venom which affects your circulatory system. In the worst case scenario, your organs shut down due to internal hemorrhaging. The other type of venomous snakes have a neurotoxic venom and this wreaks havoc on your central nervous system, leading to death by suffocation.

Not a pretty way to check out, I know, but maybe Mother Nature felt bad about creating snakes without hands or legs, so she decided to bless them with chemical weapons instead.

Now, getting back to business, there are 4 species of dangerous venomous snakes in North America and if you’re an outdoors enthusiast, you should pay extra attention to the next part of the article.

1. Coral snakes have a specific striped pattern with yellow, red and black stripes that wrap around the body. This makes them very similar to another species that’s basically harmless, the king snake. It would be a good idea to learn how to differentiate between the two for your own sake, but if you want to play it 100% on the safe side, don’t let either one bite you, just in case. 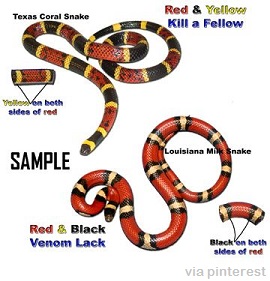 A handy way to remember the difference between a coral snake and a king snake is this poem: Red on black, friend of Jack. Red on yellow, kill a fellow.

Coral snakes are common in warm climates like the Gulf States in North America, and you can find them in southern regions, as far as Florida Keys. There are documented coral snakes populations in Arizona too and their venom is in the neurotoxic category.

2. Copperheads are also common in the southern and eastern Gulf States and in the Midwest. As the name suggests, copperheads have a camouflage coloring that mimics a forest’s decaying foliage and their venom is in the hemotoxic category.

This is not an overly aggressive species but if you bother them, there’s trouble ahead. Watch your step carefully because they’re pretty hard to spot in a forest with a decaying ground cover. It’s been noted that they sometimes emit a smell similar to cucumbers so if you’re cruising through the woods and suddenly smell cucumbers, you may want to tread carefully.

3. Rattlesnakes are found almost anywhere in North America. The Eastern Diamondback (a rattlesnake variety) is the largest poisonous snake in the US, with fangs that can be as long as one inch (or even more). Rattlesnake venom falls in the hemotoxic category.

There’s a famous species of rattlesnake, the Western Diamondback, which is notoriously brave and aggressive, especially when it feels threatened. Its modus operandi is coiling up and rattling its tail, hence the name rattlesnake.

A very dangerous rattlesnake species is the Mojave Rattlesnake, which is pretty small in size but equally as dangerous as its bigger siblings, due to the copious quantities of neurotoxic venom injected with its bite.

4. Last but not least, there’s the cottonmouth, also called a water moccasin, which is maybe the most aggressive poisonous snake in North America. The main characteristic of a cottonmouth is its pasty white mouth and its black or dark olive coloring.

These snakes spend the majority of their lives in the rivers and lakes of the south eastern and southern states, doing their thing. They have powerful hemotoxic venom and if you get bitten, your wound is prone to infections and even gangrene, followed by death if you don’t treat yourself ASAP.

Cottonmouths are often found around areas of water and are good swimmers. They can bite in the water.

Now that we’ve established the culprits, let’s take a look at how to treat a poisonous snakebite in a survival situation.

There are lots of myths when it comes to snake bites and outdoor survival, and the most famous has to do with making a cut near the snake bite in order to suck the venom from the wound.

That’s actually a no-no procedure for two main reasons: doing so may poison your friend and that would be unfortunate, to say the least. Secondly, the snake bite victim can get exposed to bacteria from the helper’s mouth, and that’s the last thing it needs, an extra infection on top of the venom.

Now, if you want to do it safely and properly. You must use a poison suction pump which is available in most snake bite kits or, if you’re not prepared with a must-have snake bite kit and you’re not able to get to a hospital immediately, you can squeeze the bitten area for at least 30 minutes in order to remove as much poison as possible.

If the snake bite is on a leg or hand, you should tie off the affected limb with an improvised tourniquet. You can use a belt or a bandana or anything else that can be tied around the area and pulled tight. Do this ASAP above the bite (but not excessively tight), in order to restrict the poisoned blood to flow to the vital organs, i.e. the heart.

But pay attention not to cut off blood circulation completely to fingers or toes and get the snake bite victim to the hospital pronto in order to avoid tissue damage due to reduced circulation.

You should try to kill the snake that bit you and bring it with you. Take extra precautions when handling the killed snake, because there are documented cases with snakes that have bitten after death. Having the snake will make sure that the victim receives the right anti-venom serum.

Snake bites all produce similar symptoms, like dizziness, weakness, numbness and impaired breathing. However, hemotoxic venoms will produce specific symptoms, including a metallic or rubbery taste in the victim’s mouth, swelling around the bite and an increased heart rate. Neurotoxic venoms make for slurred speech, drooling, drowsiness and twitching.

The best way to deal with snake bites in the absence of a survival kit is to relax, get comfortable (if you’re panicking your heart rate will increase and that translates into venom spreading through your body quickly) and try to get medical attention ASAP.