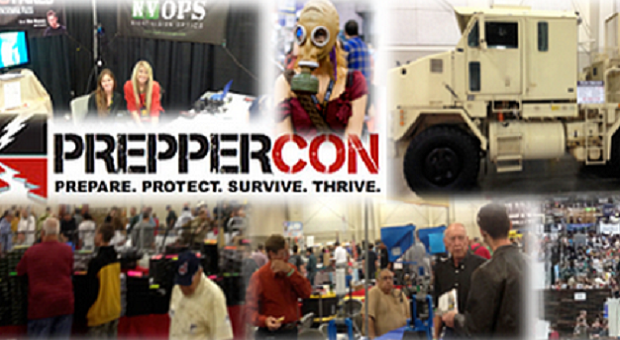 Prepper Expos On The Come Up. Here’s Where To Go!

What might surprise the non-prepper observer about preparedness expos and the self-reliance movement, (if they stop questioning why anyone would do what we do long enough to really start observing) might be the richness of diversity and creativity put into some of these events and how fast this once-tiny market is evolving.

The preparedness market has swelled from a small, oft-persecuted-but-dedicated group of hobbyists and free thinkers not large enough to keep a single magazine in print … into the movement that today drives a dizzying parade of periodicals, online publishing, paper publishing and television. It is evolving into a healthy, developing market, rich with segmentation and diversity.

I’ll touch on two events that set themselves apart from the rest. It is interesting to note that are far too many self-reliance expos to possibly hope to research for a single article. But stay close and you will find many other things about this type of events.

Perhaps it’s the proximity of Salt Lake City to the Sundance Film Festival, the fact that a lot of folks from Hollywood have cabins in Rockies, Utah’s generous sponsorship of the arts for a state of its population or some combination of the three. PrepperCon in Salt Lake City on April 24th and 25th of 2015 (this weekend) promises to be nothing if not creative.

PrepperCon will host events which range from the expected lectures, classes and commerce to a Survival Fashion Runway, Cosplay and celebrities.

I will be there to cover it for Survivopedia and I will let you know what I thought of it. So keep an eye on our website and look for the news.

PrepperCon President & CEO, Scott Stallings expected a turnout of 6,800-7,300 when he emailed me back in March. Judging by their marketing effort and my own ever-growing appreciation for how “all about” emergency preparedness the population of Utah is, he may well be right, making this one of the biggest events to date.

Either way, you will hear about it if you keep checking back.

What surprised me, at least at first, was something much rarer these days than it should be. As I was working, researching this article, a message popped up in Facebook. It was from Matt Osax, messaging me about the NPS (National Preppers & Survivalists) Expo in Louisville in October 2015. He messaged me on the exact topic of an article I was working on … this article … which got my attention.

In the course of our brief exchange, he mentions that this expo is free: tickets and nearly all classes. He says that this particular Expo is not expected to turn a profit because they do other expos for profit and “This one is our way of giving back. We do free tickets so everyone can come and also … when they spend their money they are doing it with our vendors.”

When he said “we,” he meant NPS, nearly all the presenters, and Harris Publications and Panteao Productions who are co-partner/sponsors of the event.

NPS will be in its 5th year with over 7,500 attendees in 2014. It seems like there is a considerable amount of sacrifice, good will, sharing and plain old fashioned service happening here in pulling off an event of this size to “give back” to our community.

I believed Matt’s sincerity and passion for a just cause because this is happening all over the country. Sometimes they are larger, sometimes smaller, but there is an astonishing amount of education and preparation going it, much of for free.

This is pretty amazing. Many of these expos are a one-shot deal.

Why Would Sharing Experience Make Any Difference?

What would motivate our movement to so much work for so precious little monetary return while we remain in this truly abysmal economic slump? At first glance, it might seem quite counter-intuitive.

What I think, is that at its core, all this enthusiasm and service is driven by deep-rooted commitment to a just and worthy cause. I think it is the fact that service, not self-gratification, is the true source of enduring happiness.

I think that preppers and the self-reliant are not the “Doomsday Preppers” Hollywood casts them as, but are the salt of the earth. I think Hollywood went after us because they were in search of someone “real” to put on “reality TV.” That’s what I think.

I think it’s more that we dig deep inside ourselves and our heritage, traditions and our cultural memory, which grants approval for traditions that we might not make as much sense to us on an individual level.

I volunteer as first responder in a small town without paid emergency services, so I know firsthand that I would get far more in return than I could possibly give by doing so. I know the value of our cause and I gladly and frequently donate my time to support it. In return, I have received heartfelt thanks, true and lasting happiness as opposed to fleeting self-gratification, and much more training than the average prepper could hope to afford on their own.

Much of that training was provided by various levels of government, the same government that launched a huge propaganda campaign against our movement in 90’s.

The “anti-militia” campaign was so large that it turned the word “survivalist” into a pejorative, forcing us to rebrand ourselves as preppers, caused the tragedies at Ruby Ridge and Waco and drove many good people underground for fear of having their preps spread out on tables for a news conference as they were paraded around like some kind of monster for daring to be self-reliant.

Some of you have not been part of the movement long enough to understand this and I see you, professionals among you, debating the current meaning these two words with a dictionary and reason, but precious little understanding of our history and how the words came to be used as they are.

So I am sharing our history with you. So, you see, this service-heavy model is not as much of a mystery to us self-reliant folk as it might seem to an observer viewing us from the outside-in, not applied to expos or anything else.

If you disagree, there is a little box where you are welcome to express your thoughts at the bottom of the page.

There are several good reasons to attend and support preparedness Expos. They offer opportunities to serve others, to network, to socialize, to learn, to educate, to participate in the community and to support it. They also clearly offer economic opportunities for vendors and customers to exchange goods, property, currency and services.

I have been asked to make presentations at some expos and to attend others and report on them. I am honored to be asked to present and pleased that my articles are getting read. I enjoy working with such good people on projects that I consider to be worthy causes.

To me, the benefits of this interaction far outweighs what I perceive to be my risk and my exposure to it. I encourage you to look at your situation and to judge for yourself. Online searches, asking around on preparedness networks, forums and social media will reveal events near you.

Just be aware they vary greatly in attendance, presentation, diversity and relevance, so be sure to do your homework in order to avoid attending an event that doesn’t meet your expectations.

But realize that the opportunities that flow from any such experience will depend large on you your ability to leverage it and what your intentions are in attending.