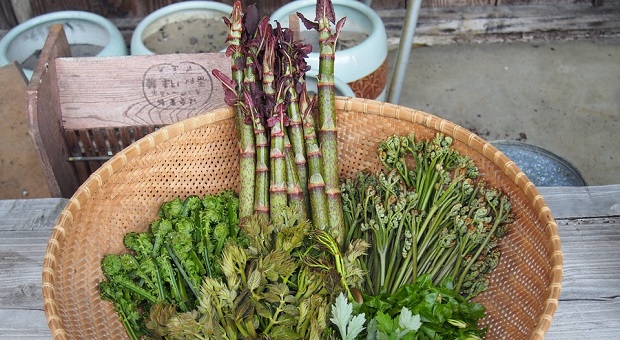 What would you say if I told you that there were between 12k and 25k different enjoyably edible things on our planet but we only actually eat about 500 of them, at the most?

Our ancestors ate quite a larger range of foods than we do today, and many of them had medicinal as well as nutritional benefits.

Read on to learn more about these lost yummies.

I said “enjoyable” because there are actually as many as 100k edible organisms, but they don’t all taste that great. Since there are so many forgotten food options, we’ll focus on the ones that taste good. Many of these may even still be in your backyard, or in the woods around your house, but the value of them has been lost, many of them in just the last 120 years ago or so. 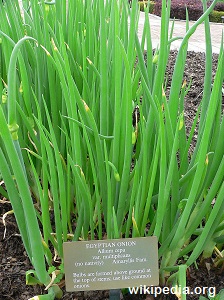 Also known as walking onions, these above-ground plants are perennial and the little onions grow just like flowers would on a regular shrub. The reason that they’re called walking onions are because the bulbs fall off and start a new plant the next spring. Walking onions were a staple in kitchen gardens through the 1800’s.

These onions taste stronger than regular onions but the entire plant is edible. The leaves are good to chop up and use as you would scallions, and the little onions are great for soups, stews, or pickling. The beauty here is that you don’t have to replant them in the spring as you would regular onions.

Walking out and picking a few onions off the nearest shrub is a lot easier than going to the garden and pulling them up, too!

You likely won’t see onions the first year but by the second, you will. 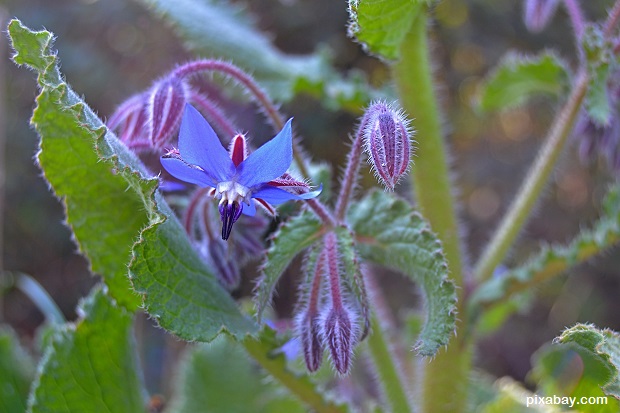 This plant was another staple in our ancestors’ kitchen gardens and I’m not sure why it fell out of favor. It’s easy to grow and creates many seeds in the fall that you can dry for use the next season. It also has several purported health benefits, attracts bees, and repels the tomato hornworm, so it’s a good companion plant for your tomatoes.

Borage has thick, prickly, fuzzy, leaves and pretty purplish star-shaped flowers. Both the leaves and flowers are not only edible, they’re delicious and great for you. The young leaves and flowers have a light, cucumbery flavor that makes them good in salads. Older leaves can be cooked just like other leafy greens and the flowers can be candied, added to salads, and used to make syrup.

Borage is a good source of calcium potassium, iron, and all of the other nutrients found in leafy greens, as well as GLA, an essential omega-6 fatty acid. According to the University of Maryland, GLA helps fight inflammation, skin disorders, ADHD, arthritis, atherosclerosis, osteoporosis, and diabetes.

Historically, Borage was also used to treat skin complaints and promote breast milk production and reproductive plants as well as the aforementioned conditions. 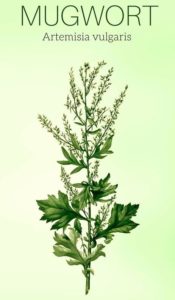 This aromatic has been used for centuries medicinally and is pretty good in a salad as well because it tastes like lettuce. There are several different species that are used but the one that’s most common in the US is called common mugwort or Common Wormwood. It’s prevalent in the Eastern and Northwestern US. It’s well adapted to grow in rocky soil.

The leaves are edible, with a slightly bitter flavor. They can be used in salads or cooked in soups and is also used to make tea and alcoholic beverages. They’re frequently dried and used as a meat and fish seasoning. You can eat the flowers, too.

This may have originated because mugwort has long been used to aid in digestion. It’s commonly used to treat cramps, vomiting, constipation, diarrhea, menstrual cramps, anxiety, insomnia, depression, irritability. Be careful though; it’s used to treat menstrual cramps because it tightens the uterine muscles, which can cause abortion, especially in the first trimester.

Now, for some survivor and homesteading uses: the furry underside can be scraped off and used as tinder, the stalks are good for kindling and the dried leaves will keep a fire smoldering for a long time, and it’s also a natural insecticide.

Be careful growing mugwort because it will take over your garden if you’re not careful. Growing in pots is a good way to avoid this. Do your research on specific mugwort species because different species have different uses. 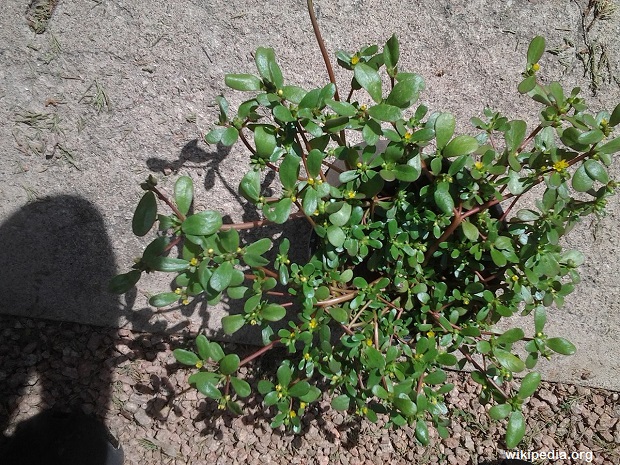 You probably have this plant growing on your property and don’t even know it! You know that succulent weed with pretty little yellow flowers that grows in your sidewalk cracks, or between bricks in your garden wall? Yup, that’s purslane. It’s been used for thousands of years in the Middle East as a food source and made its way to the US before Columbus did.

The side-walk purslane also has a sea-dwelling cousin that’s edible and both were a common food source for Native Americans, and later settlers and pioneers. Over the last century or so, purslane has mysteriously slipped from the pages of cookbooks to the pages of horticulture books, which is sad. The entire plant is edible.

Purslane is good in salads and the mucilage (slimy stuff) inside the leaves is a good thickener. Purslane was used to make beer before hops entered the picture.

The leaves are packed with omega-3s along with vitamins found in other leafy greens and have a lemony flavor. It’s often used in place of spinach or arugula in salads but can be cooked, too. It’s good in soups and the seeds can be ground into flour.

From a prepper’s point of view, purslane is valuable because it grows in arid or dry places where other edibles are scarce. 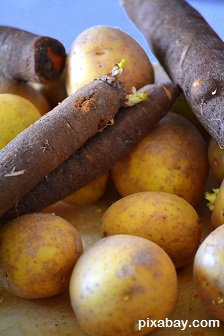 Salsify is a root vegetable that dates back to the 500’s.

It looks kind of like a white carrot. It’s white on the inside and beige on the outside.

Unlike carrots, the tops look more like dark, thick grass. It’s often called oyster plant because some say the taste is reminiscent of oysters, though others call it nutty tasting.

The root is cooked similarly to carrots; toss it in soups or roasts, cook them alone or mash them. The greens are the same as other greens; use them in salads, cook them down, or sauté them in butter. They taste similar to asparagus or chicory.

Nutritionally, they’re similar to other greens and are purported to help remove impurities from the blood. Salsify was a staple food for centuries and is now making a culinary comeback.

These are just a few of the staple foods of our ancestors that have been lost by the wayside in the name of processed foods and grocery stores. There are quite literally thousands of other foods that are edible but unknown to most palates, and we might be forced to use them to survive.

If you miss the knowledge to grow your own food, click on the banner below to find out more about how our ancestors used to grow food and be self-sufficient with amazing efficiency. 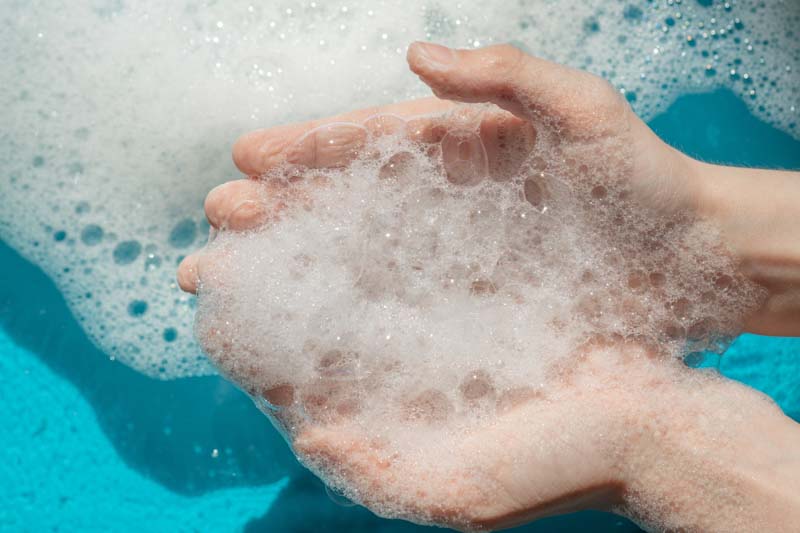 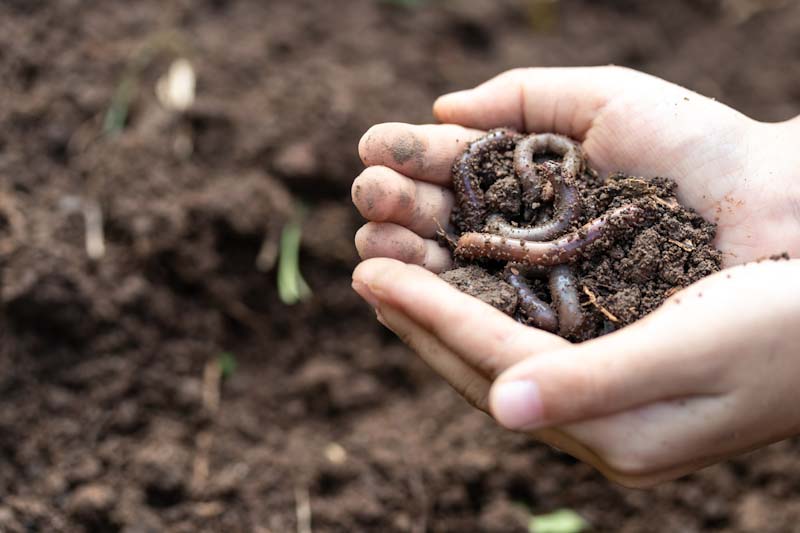