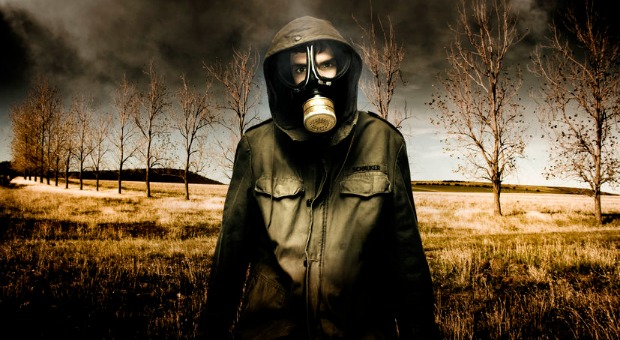 Killing Us Softly – How Just Breathing Is Deadly

You step outside. It’s a clear, beautiful day and you take a deep breath of what smells and tastes like fresh, clean air.

But is it? Probably not.

Even though you may live in a place that’s relatively unpopulated and doesn’t have big cities or factories for miles, we live in a big bubble. At least certain air pollutants from Tokyo may eventually make their way to Montana.

Air pollution is a huge problem for all of us. It’s bad enough that we have to worry about other countries using chemical warfare on us; we’re already getting slowly poisoned just by breathing!

What is Air Pollution?

As with many health hazards, the Environmental Protection Agency has set minimum standards for controlling the air that we breathe. To be fair, there’s no way that even Big Brother can completely eliminate air pollution because some of it occurs naturally.

Air pollution is defined as any gas, liquid, or solid that is released into the air in a large enough quality to cause harm to people, plans, animals, or property.

In its completely natural state, Earth’s air is made almost entirely of oxygen (21%) and nitrogen (78%), with extremely small percentages of other gases such as carbon dioxide (.05%) and argon. The thing is, just a slight shift in these percentages can cause problems. For example, if the concentration of carbon dioxide would increase to even 5%, it would kill us in minutes.

What are the Leading Air Pollutants?

Air pollution can be broken into 2 categories – particulate and gas. Particulates are actual, physical contaminants that float in the air in either solid or liquid form. Sometimes you can see them, and sometimes you can’t. Some examples of particulates are dust, smoke, dirt, soot, and different –oxide gasses such as nitrogen oxide and sulfur dioxide that form particulates as they’re carried on the wind.

The EPA has identified and created guidelines for 6 different pollutants. Of course, since they’re a government entity, they have an acronym for the guidelines they set: NAAQS – National Ambient Air Quality Standards. It would be too hard, I guess, to just say “air quality standards”.

Anyway, these “criteria pollutants” are found everywhere in the US, though the concentrations are definitely different throughout the country, and include:

This is the type of pollution that’s created when chemical or volatile organic compounds such as gasoline vapors, car exhaust, oil on the streets, electric utilities and emissions from factories form a chemical reaction when exposed to sunlight.

Though they’re not emitted into the air, they’re close to the ground and can cause all sorts of health problems and lung diseases. It can also harm plants and affect ecosystems.

We already talked about this a bit, but particulate pollution can cause lung damage and breathing issues that may be permanent or temporary. Some can actually pass into your bloodstream, so if the particulate is hazardous, it’s now in your system. Particulate matter is the leading cause of haze in the US.

This is a gas produced by burning something, particularly fossil fuels. You’ve likely heard of carbon monoxide testers for your house. Vehicles and machinery also emit it in exhaust outside. Inside, you have to worry about proper ventilation when you’re using your fireplace, gas stoves, or other fuel-burning appliances.

This isn’t anything to mess around with. It will cause dizziness, confusion, unconsciousness, and death within an extremely small amount of time. You’ll go to bed and not wake up.

We all know about lead paint and lead-paned glass. There’s speculation that Picasso actually had lead poisoning, which caused him to paint the halos in his pictures. It wasn’t his imagination – he was actually seeing them!

The EPA has restricted the use of lead in paint and most everything else. There are also regulations in place for houses that contain lead. They won’t pass inspection until the lead paint is removed and the lead-paned glass is replaced, and there are guidelines for safe removal.

Because it’s a mineral, lead is also a concern in water, and leaded fuel is still used in aircraft. Other sources of lead contamination are utilities plants, waste incinerators, and battery manufacturers. Since the EPA regulated the use of lead in automobile gas, lead levels in the air decreased by 98% in 25 years.

Lead accumulates in your bones and, depending upon your level of exposure, can harm your nervous system, kidneys, immune system, reproductive system, developmental stages, and your cardiovascular system. It also impacts the oxygen carrying capacity of your blood and can cause behavioral problems, learning disabilities, and decreased IQ in kids.

Finally, lead can decrease the growth and reproduction rates of many plants and animals. The thing with lead is that just touching it isn’t necessarily the problem; it’s when the dust turns into particulates that there’s a problem.

For instance, when a kid would chew on lead paint on crib bars, it broke up into small pieces and entered the bloodstream. On the flip side, people have lived with lead bullets in them for decades with never a hint of lead poisoning.

This is another gas produced from burning fossil fuels. It’s also a byproduct of volcanoes. It gets in the air via power plants and other industrial factories that burn fossil fuels. Trains, ships and many types of heavy equipment also produce Sulfur Dioxide. The presence of sulfur dioxide is also an indicator of other Sulfur gases in the air and it’s a component of smog.

Brief exposure can cause respiratory issues, especially in people with asthma. The real problem comes when it reacts with other compounds and form small particulates. These can dig deep into your lungs and cause serious problems. It also causes harm to plants and animals.

Dealing with excess Sulfur Dioxide is tricky. We worked to reduce it, then found out that, just like the cooling effect it has in the cloud over a volcano, it also keeps a certain level of sunlight from penetrating. When we reduced levels, we went too far, and it contributed to global warming.

This is another gas that’s a byproduct of burning fuel. It gets in the air via car exhaust. Like Sulphur Dioxide, Nitrogen Dioxide is an indicator for a larger group of nitrogen oxides.

Health effects are the same as Sulfur Dioxide – respiratory issues including asthma and respiratory infections, visits to the ER, and admission to the hospital. It can form particulate matter and ozone. Both cause respiratory problems.

The big thing here is that Nitrogen Oxide and others in the group react with water and cause acid rain that damages plants and entire ecosystems such as lakes, ponds, and forests.

The EPA has strict regulations, but as you well know, that doesn’t stop big industry from sneaking around and doing what’s cheap instead of what’s right. We’re also to blame – we all get out there and start our cars every day. It’s a tough problem to solve.

Just because the EPA only regulates 6 pollutants doesn’t mean that there are only 6 that we have to worry about.

We discussed carbon dioxide as a harmless, natural component, and what can happen if it’s increased beyond the normal levels. On top of being toxic to us, it’s also the number one greenhouse gas that’s contributing to global warming. Since nearly every living creature emits carbon dioxide when we breathe and all of our vehicles emit it when we drive, it’s a tough problem to solve.

Guess what, though? Trees and other plants breathe carbon dioxide, and exhale oxygen. Sounds like planting things instead of making more parking lots may be a good start.

Volatile organic compounds, aka VOCs, are carbon-based chemicals that easily evaporate at natural heat levels and turn into gases. VOCs are used in household chemicals such as wax, varnishes, stains, and paints for exactly this reason. Unfortunately, they cause respiratory problems among other issues, and also harm the environment.

Read also DO YOU KNOW HOW TO USE YOUR GAS MASK?

What Can You Do?

About AirNow is a government sight that offers daily air quality conditions for more than 400 cities. Now, you note that I said a government site, so do with that what you will. On days that pollutants are high, they recommend that you keep your windows closed and stay inside as much as possible. Also, change the air filters in your house regularly.

The best thing that you can do is be proactive, and everybody else needs to be, too. Though that sounds incredibly naïve, it’s the only real solution. Plant trees and plants, walk or bicycle more and drive less, and use environmentally-friendly paints, cosmetics and other products.

If you do that, you’ll not only help reduce things long-term, you’ll also be healthier now.