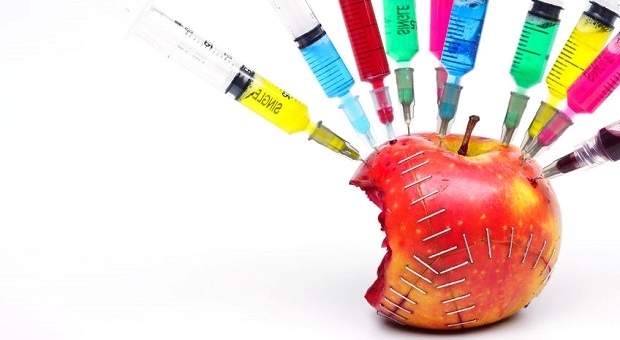 Unless you grow all of your own food, you have no way of knowing exactly what you’re putting into your body. Even then, up to 90 percent of all ground water contains at least trace amounts of pesticides and herbicides due to run-off. A simple can of green beans or a bottle of water can contain toxins that aren’t even listed on the label.

The bottom line: food labels are confusing and often misleading. For that matter, many of the chemicals in your food aren’t even LISTED on the label. Those are the ones that we’re going to discuss today.

During the Green Revolution that occurred post-WWII, scientists started fiddling with genetically hybridizing different types of wheat and in order to increase yield and disease resistance. The movement was led by a guy named Norman Borlaug, who actually won the Nobel Peace Prize for “saving 1 billion lives.”

One of the initiatives that he led developed a new, high-yielding species of a semi-dwarf wheat that, when grown with certain pesticides and fertilizers, increased wheat yields exponentially. The goal of solving world hunger was met but many believe that it was at the cost of the nutritional value of wheat and the health of the general population.

{adinserter survivalmd}GMOs are also used in growing soybeans and cotton. Though the USDA declares that GMOs are safe, there are independent studies that show that they aren’t.

These studies have shown that foods that have GMOs may be linked to organ failure and sterility in later generations of lab animals. GMO wheat may also explain why so many more people are developing issues with gluten, though the studies comparing gluten levels in GMO wheat compared to wheat grown 100 years ago are divided.

Basically, aspartame, saccharine, sucralose and sorbitol are man-made chemicals used to add sweetness to food without adding calories. The FDA says they’re safe even though they’ve been linked, depending on which one you look at, to central nervous system damage, cancer, metabolic changes, dizziness, headaches and hallucinations (which I personally think is a side effect of central nervous system damage, but that’s just my opinion).

They also may cause over-eating because your brain thinks that it’s getting sweets because your taste buds say so, but when no carbs show up, the craving continues. Also, people think that since it’s no-calorie, they can eat with abandon. Products with artificial sweeteners often contain other undesirable chemicals as well.

These are often added to foods and carbonated beverages to prevent the growth of mold, give a product longer shelf life, and to prevent fats from going rancid. Benzene, the chemical additive in both, is a known carcinogen and has also been linked to thyroid damage, heart problems, asthma, skin problems, allergies, and can affect estrogen levels. But at least your food won’t go bad. Hmph. You’ll often see these listed as BHA, BHT, or TBHQ, if they’re listed at all.

Yeah, candy corn looks pretty with its stripes and soda is more eye-catching with colors that match flavors. Cake mixes look great with those little sprinkles on top and cereal is definitely more appealing to kids when it contains a rainbow of colors. However, the old saying, pretty is as pretty does applies here and let me tell you, artificial colors are pretty ugly in that context.

Artificial colors are made from coal-tar derivatives. Artificial flavors are made by using various chemicals that emulate the flavor. Both are linked to skin problems such as rashes, hyperactivity, headaches, allergic reactions, asthma and fatigue. Artificial flavors may also negatively affect beneficial enzymes, your thyroid and RNA, which, in a nutshell, protects your DNA strands. Often, if a food contains one, it contains the other. Not so pretty now, huh?

Some names to look for include Tartrazine (yellow 5), Blue 1, Green 3, Red 40, and yellow 6. Basically, if it’s processed and lists artificial colors, you should probably avoid it.

For decades, butter and lard have been blacklisted as being horrible for your heart and your health in general. To replace it, hydrogenated and partially hydrogenated oils, shortenings, margarine and olestra were created. Now, some of these may be listed as palm oil, soybean oil and other natural-sounding stuff, but the bottom line is that the hydrogenation process ruins any health benefits that the oil may have started with.

All of them contain high levels of trans fats, which aren’t natural fats at all. The food industry created them as “healthier” alternatives to natural fats because butter was deemed bad for us. Trans fats contribute to heart disease by increasing “bad” cholesterol levels while decreasing “good” cholesterol levels. Plus, butter is delicious and contains heart-healthy omega-3’s so there’s really no need to use a substitute.

I’ll probably get flamed for saying that, so let me add that ANY fat should be used in moderation. If the idea of butter doesn’t appeal to you, try coconut oil or nut oils such as almond oil. They’re much healthier than the fake stuff or butter.

Oh, and just FYI, olestra is indigestible and can cause GI disease, gas, bloating, diarrhea, bleeding and incontinence but hey, if you really want to eat the chips without absorbing the fat, go for it. Personally, I’d suggest making our own chips at home with a healthy oil or grabbing some broccoli instead.

These lovely chemicals are used to preserve the colors and flavors in cured fish and meats and to prevent botulism. While preventing botulism is definitely a good thing, how about just sticking with fresh, unprocessed meats? If you eat hotdogs, deli meat or cured fish, you’re likely eating one of these two chemicals. The problem with them is that they may combine with natural chemicals in your stomach and digestive tract to form nitrosamine, a known carcinogen. No Bueno.

Ahh, at last. MSG, or monosodium glutamate, has come under fire in recent years because of the side effects. It’s used as a flavor enhancer for many foods, including restaurant foods (the most well-known being Chinese restaurants), potato chips, salad dressings, canned soups and many processed foods.

MSG may cause an array of side effects including, most commonly, headaches and nausea. It may also cause swelling, weakness, breathing problems, burning sensations and changes in your heart rate.

Mercury is a naturally occurring mineral but, just like arsenic, isn’t good for you at any level. It can cause serious neurological problems, up to and including death.

Fish absorb mercury through their gills. Unfortunately, our waters are so polluted that the levels have increased to toxic levels in many of the larger fish. The ones higher up the food chain are most affected because tiny fish may breathe small amounts of mercury, small fish eat tiny fish, then medium fish eat them, and large fish eat all of them. They absorb the mercury from every level.

Such fish include swordfish, tuna, king mackerel, and shark. Mercury is also found in levels in shellfish. Your body can process small amounts of mercury so you can avoid this concern by limiting your consumption of these type of wild-caught fish to once a week or less.

BHA, or Butylated Hydroxyanisole, BHT, or Butylated Hydroxytoluene, and propyl gallate are three preservatives found in hundreds of foods and cosmetics. Some examples are mayonnaise, vegetable oil, dried meats, chicken soup, many cereals, potato chips, and chewing gum. Like other preservatives, it’s used to prevent spoilage and food poisoning but it can disrupt your hormones and your endocrine system. This preservative is found largely in processed foods.

This one is really one that sneaks in on you because it isn’t ever listed on the ingredients. That would be because it’s not directly in the food. It’s used in plastic bottles and containers and in canned foods to line the cans to keep acids from eating through the sides and to prevent microbial contamination. It’s used in plastic to preserve the integrity of the compound.

BPA, or bisphenol-A, is banned in many countries but is still in use in the US, though the FDA is making moves to ban it. Still, if you have a stockpile, your cans are lined with it. Also, your water polycarbonate plastic bottles may contain BPA.

BPA has been linked to delayed brain development and behavioral problems in kids, developmental problems with fetuses, and cancer later in life.

The real danger comes when the bottle is heated or the can is dented. Then BPA can leach into your food or the water. The best way to avoid contamination is to buy products that are BPA free – look for the recycle sign and if it has a 7 inside of it, the container may contain BPA.

Don’t buy canned foods that are dented, don’t leave your water bottles in a hot car or somewhere else that will cause it to get hot, and don’t microwave your food in plastic containers.

Though there are many different chemicals in your food, these are some of the top ones to avoid. Buy whole foods and wash them well before you use them. That will help get rid of pesticides and other chemicals that they may have been exposed to.

Read your labels and if you don’t understand the ingredients, skip it. Would you let a stranger blindfold you and stick random things in your mouth? Of course you wouldn’t, but that’s basically what you’re doing if you’re eating foods with ingredients that you don’t recognize.

Just be smart and don’t eat processed garbage. That will be ¾ of your battle already won. This list is just a jumping-off point. If you have anything to add, please do so in the comments section below.