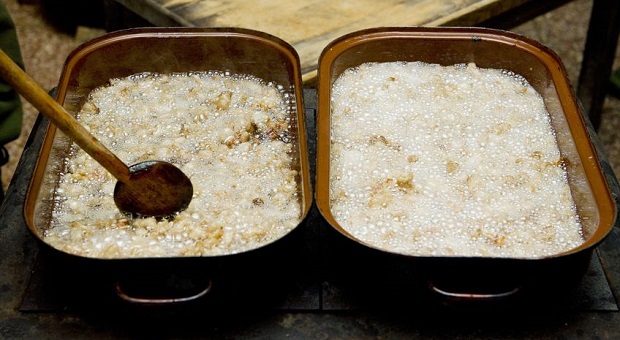 Back To Basics: How To Make And Preserve Lard

Lard, or fat from a pig’s belly, has been used for centuries for everything from greasing skillets to waterproofing boots. It’s one of the easiest fats to work with and it can be made with very little effort.

Though saturated fat has been scorned for the last couple of decades because of its purported ill effects on health, lard still has a place in the home, especially if you’re living off the grid or are in a situation where you have to live off of what you have.

Why You Need It

Before we go into how to make lard, you need to know a bit about why it’s not the demon that the medical community has made it out to be. The fact is, lard isn’t as bad for you as butter is and it’s a good source of vitamin D as long as it’s from a pastured pig. Lard is only about 40 percent saturated fat, while the other 60 percent is unsaturated.

You’ll notice that I stipulated that the fat needed to come from a pastured pig. That means that store-bought lard or the fats from store-bought bacon likely don’t have the same health benefits of naturally raised pigs. The lard from grain-fed commercial pigs doesn’t have the omega-3’s found in pastured pigs, either.

Oh, and lard doesn’t make you fat or kill your heart, despite what you read or what your traditional doc may tell you. It’s all about balance and recent research proves that natural animal fats doesn’t deserve to be vilified nearly as much as margarine or that other can of stuff that replaced lard in the 50s or 60s.

The key point that you need to take away from this is that there is a huge difference between commercial lard and locally sourced, pastured lard. The fat content is the same, but the health benefits can be vastly different. Of course, if you’re using fat from your own pigs, this is a non-issue if you’re raising them as most small farmers do, in the pasture.

In addition to using lard to grease your skillet, there are many other uses for it. Lard is great to use to waterproof your coats or shoes, and you can make candles from it. It will make the flakiest pastry crust you’ve ever eaten, and it’s been used for centuries to make soap. It’s great to use as a lubricating oil on mechanical equipment and will help prevent rust.

Lard is a great moisturizer and is often used in folk remedies as the base for balms. As a farm-raised girl, we used lard all the time, and still do. These are just a few uses that I can think of off the top of my head.

How to Make It

Now, let’s get down to the business of the lost art of making lard. I think you’re going to be pleasantly surprised at how easy it actually is, and pleased to learn that there’s a crispy, tasty treat that you’re going to get out of the process.

As I’ve already stated, finished lard is made by rendering pig fat. Rendering itself is a simple process; by that, I mean that there aren’t many steps to it and it doesn’t require any fancy ingredients or equipment. As a matter of fact, all you need is good fat, clean water, a heavy-bottomed stock pot, a sieve with some cheesecloth (or a really fine sieve) and a quiet afternoon to dedicate to the process.

I’m even going to touch on how to do it in a slow cooker; that‘s how simple it is. That doesn’t mean that rendering is always easy, because it’s not. For example, rendering bear fat is labor-intensive and stinky. Rendering lard is much less painful, and the results are worth it.

The first thing that you need to do is acquire high-quality pig fat. There are two different areas of the pig that you can make lard from. The first type of fat is called leaf lard; it’s located inside of the pig near the kidneys. Back fat is from – yup, you guessed it – the back of the pig.

Back fat is a richer-flavored lard that may not be as suitable for some tasks such as baking because you don’t really want pork flavored peach pie crusts. It’s great for cooking meat and vegetables in. Also, since it comes from the back, it’s probably going to have some meat still attached to it.

Leaf fat tends to be more pure, without the added meat, and isn’t strongly flavored. This is what you want to use for your pie crusts and other types of cooking that require lard that doesn’t taste like fat.

Next, you need to figure out how much lard you want. You’ll need just under a pint of lard per pound of fat rendered. Now you’re ready to start making lard!

Trim and Cut Your Chilled or Frozen Fat

You’re basically melting the fat, so you’ll have to cut it into small pieces if you want it to render evenly and in a timely manner. Because the fat tends to be a bit soft, it’s easier to work with if it’s frozen, or at least chilled. Some people grind it, which is labor-intensive on the front end but makes the rendering a bit easier. You don’t need to do this, though. Just trim off as much meat and blood spots as you can and then cut the fat into 1/2-inch cubes.

Add Your Fat and Some Water to Your Stock Pot

You only need a 1/2 cup or so of filtered water. This doesn’t have to be an exact amount because it’s going to evaporate. The only purpose of the water is to keep your chilled fat from burning until it starts to melt. Put the lid on the stock pot and bring the lard to a simmer over medium-low heat.

Wait for the Rendering!

All you need to do now is let the fat melt with the lid on, stirring it occasionally. After 45 minutes or an hour, the water will be evaporated and the fat will be melting nicely. You’ll start to notice little bits of meat floating to the surface of the fat. These are called cracklings and are the delicious little surprises that I mentioned earlier. They’re also a good indicator of when your lard is done. Keep stirring periodically.

As the fat continues to melt and reaches the point where it’s mostly liquid, you’ll notice that the cracklings are settling to the bottom of the pot. How long this takes depends on how much lard you’re rendering and is also affected by the humidity. This is your sign that the lard is done.

Turn the heat off and line a sieve with cheesecloth. You can use a fine-mesh sieve but this step is kind of important because you want to get all of the cracklings out of the lard for preservation purposes, and for purity, too. You don’t want cracklings in your pie crust.

If you only rendered a bit of fat, you can just pour the fat through the sieve into another kettle. If you rendered more than a quart or so, use a ladle because the liquid lard is going to be hot and hot grease makes for a nasty burn. Be careful. I prefer to use the ladle because it helps to keep the settled stuff on the bottom of the pot, too.

Once you strain it, you can pour the lard into your prepared jars. You don’t have to do this immediately; you can let the lard cool for 15 or 20 minutes so that you don’t have to worry so much about burning yourself.

Rendered lard will be a light golden color in its liquid form but it will cool to a creamy white color.

This is the delicious reward for your hard work. Cracklings are protein-rich, crispy, and delicious. They’re great as a snack or to put in your green beans or salad. Just let them fry down a bit until they’re crispy.

Lard will store for a few weeks on the counter top, a few months in the fridge, or almost indefinitely in the freezer or canned. It’s important to boil all of the water out of your lard, but if you only use 1/4 or 1/2 cup in the beginning and you cook it low and slow as directed, this won’t be a problem.

If you want to do this in the crock pot, the process is essentially identical except you should leave the lid on for the first hour or so. Start on high and if it seems that your fat is going to singe, turn it down.

After the fat starts to melt, remove the lid. After most of the fat is melted, start removing the lard from the slow cooker so that the rest of the lard will melt faster. The main difference is that you’ll need to bake the cracklings for a few minutes when you’re done in order to get them crisp.

Now you know how to make your own lard at home, and even if you don’t have your own pigs, you can sweet-talk your local butcher or farmer and you may even get it for free! Score! Then start preparing other recipes that were basic things that our ancestors used to make. Click on the banner below to find these secrets that our grandfathers were probably the last generation to practice for survival! 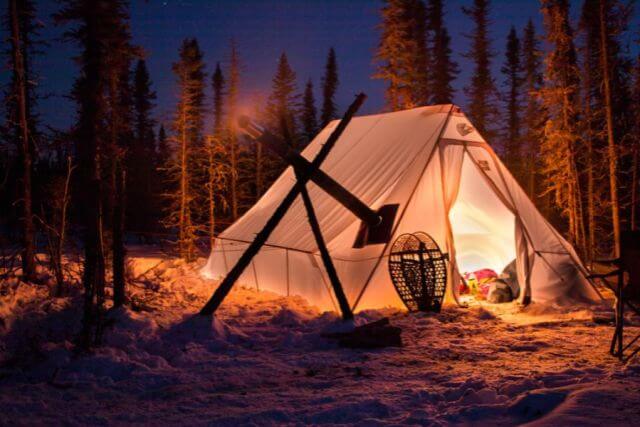 How To Camp Like A Pro This Winter: The Ultimate Beginner’s Guid...