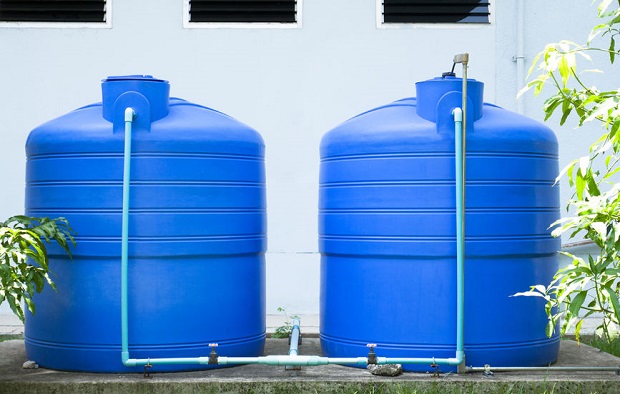 How Many Ways Can You Build A Water Container?

We can’t live without water, or at least we can’t live without it for more than three days anyway. Regardless of your situation, whether you’re an urban prepper or you’re already living off-grid somewhere in the countryside, storing water in a big tank on your property as a backup system would be a great idea.

I am talking about building a water tank and hooking it to a rain water collector; now you can see why DIY-ing your own water container would be a good thing for long term survival, because rain is a given regardless of your geographical location.

Generally speaking, the vast majority of people are getting their water from the public water supply system, which is totally dependent upon power to work. If the power goes, everything goes, including your source of potable water.

Hence, today’s piece about a few DIY ideas about how to build a water container, because there’s no way around it: if you don’t store enough water, you’ll get in trouble in no time if the power grid goes down.

Now, if you’re looking to build your own water supply system (as a backup for irrigation purposes, for your livestock or things of that nature), the water tank is usually the most costly part of the project.

Plastic water containers are generally a good idea as they’re fairly easy to set up and install basically anywhere, but they are pretty expensive if you order them in large sizes. So, you’ll have to look elsewhere for the answer.

Project 1: How to Build a Concrete Water Tank in Your Backyard

Concrete water tanks are used for thousands of years, I think the Romans were the first civilization to implement them on a large-scale.

However, you can build your own concrete water tank in your backyard for relatively little money and without requiring mad-engineering skills. This particular tank is 12 feet long, 3 feet wide and 3 feet deep and it is capable of holding 4 tons of water or 4 thousand liters (1000 gallons give or take).

Also, it’s built very close to the house itself, for making it easy to connect it to a rain-water collecting system. Unlike plastic water storage containers, concrete-made ones are cheaper to build and they will last longer. Also, plastic is not the best material for storing water long term, as it encourages bacterial growth and also leaks BPA, which is a well-known endocrine disruptor.

The materials used in this DIY project are mild steel rods for the frames and the edges, concrete, an electric welder and a few basic tools like a vice, nuts and bolts, a few planks of wood and small mesh chicken wire. Just take a look at the video tutorial and you’ll get the general idea.

Project 2: How to Build a Rain Barrel System

This project is a lot easier to DIY as it ‘s composed basically from 4 plastic barrels (50 gallons each) hooked to a rain water collecting system and it’s mainly used for providing clean/fresh rainwater for a veggie garden. However, if SHTF, the water stored in these containers can be used for survival, so it’s a win-win situation.

The barrels are installed very close to the house and they’re hooked to a rainwater collecting system which keeps them filled with pure water, provided it rains enough.

Just watch the video tutorial, it’s pretty explicit and straight forward. If you plan to use this system for potable water storage, it would be advisable to use food grade approved parts when you’re building it (caulk can be toxic, regular water hose contains lead and so on and so forth).

Project 3: How to Build a Water Tank Using Plastic Bottles

This project uses plastic bottles for building a water tank and it arrived to us courtesy of Peace Corps USA in Tanzania, as they were helping the locals with a rainwater collecting system.

To reinforce the water structure, you’ll be using a wiring/mesh system. Using this clever method, you’ll be able to build a 1000 gallon water tank spending next to nothing and using readily available/recycled materials. Watch the video tutorial below.

Project 4: How to Build a Sand Water Cistern

In our next project, we’ll explore how to collect rainwater from a roof, storing it via a sand cistern and re-using it for irrigation purposes or survival if SHTF.

What’s interesting about this experimental project is the fact that it’s a closed system which stores water in the pores of the sand, keeping it cool. The water is not exposed above ground at all and that’s an obvious advantage if you think about mosquitos and other insects that thrive in stagnating water. Also, being stored in the ground and away from sunlight will prevent algae from growing inside the system.

Usually, the word cistern is associated with a large water container (plastic/cement made) placed above ground. But this particular system once completed will totally disappear in the landscape. Are you amazed yet? Well, check out the video tutorial below and start building!

To get the general idea, using this method you’ll be able to capture 600 gallons of rain water in a 1 inch rain over 1,000 square feet of roof. And one big advantage of this clever system is that as water percolates into the sand, it gets filtered free of charge!

Project 5: How to Install a Rain Water Capture Cistern

This project is about digging a 500 gallons exchange system that will capture rainwater from the roof of your house for sustainable gardening or, who knows, for helping you in a survival scenario.

Keep in mind that this project requires some serious excavation and a water pump/filtration system, other than that it’s pretty straight forward and massive fun. Check out this video tutorial and start working!

Project 6: How to Build a Typical Water Storage Tank

This is not your regular DIY project, but watching the following video tutorial will make you understand how big-industrial sized water storage tanks are designed and built and maybe you’ll get ideas about how to improve your own home-made projects. It’s like a lesson in engineering and you may be able to translate some of these macro-ideas into your micro-DIY project. Enjoy!

I hope the article helped. And if you are interested in more ways to obtain water, click on the banner below to find out more!

If you have any other ideas or questions, feel free to comment in the dedicated section below.