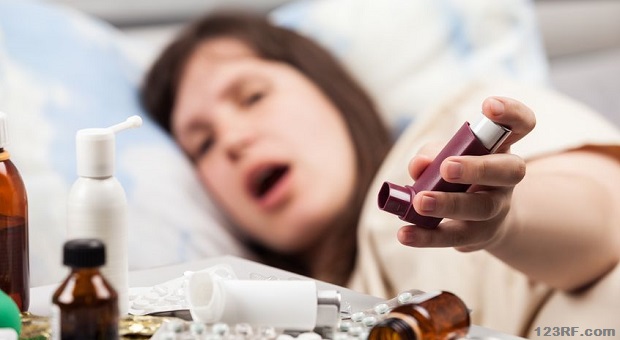 12 Ways to Survive with Asthma

One of the most common medical issues today is asthma. Asthma is a chronic condition that affects your ability to breathe. The condition affects the airways, which are the tubes that transport air to your lungs. In the United

States alone, there are almost 20 million people who suffer difficulty with breathing due to asthma and its complications. Indeed, it’s the most common cause of chronic illness in children. In a survival setting, stress and hygiene issues will only make things worse.

When people with asthma are exposed to a substance that they are allergic to (an “allergen”), the airways become inflamed.

As the airways become swollen, they constrict and less air gets to the lungs.  As such, you will develop shortness of breath, tightness in your chest, and start to wheeze and cough.This is referred to as an “asthma attack”.

In rare situations, the airways can become so constricted that a person could suffocate from lack of oxygen. This extreme condition is sometimes referred to as “Status Asthmaticus”.

Here are common allergens that trigger an asthmatic attack:

True and False about Asthma

There are many myths associated with asthma; the below are just some:

Here’s a “true” myth: Asthma IS hereditary. If both parents have asthma, you have a 70% chance of developing it compared to only 6% if neither parent has it.

Asthmatic symptoms may be different from attack to attack and from individual to individual. Some of the symptoms are also seen in heart conditions and other respiratory illnesses, so it’s important to make the right diagnosis.

Besides these main symptoms, there are others that are signals of a life-threatening episode.

If you notice that your patient has become “cyanotic”, they are in trouble. Someone with cyanosis will have blue/gray color to their lips, fingertips, and face.

You might notice that it takes longer for them to exhale than to inhale. Their wheezing may take on a higher pitch. Once the patient has spent enough time without adequate oxygen, they will become confused, then drowsy, and then possibly lose consciousness.

Use your stethoscope to listen to the lungs on both sides. Make sure that you listen closely to the bottom, middle, and top lung areas. In a mild asthmatic attack, you will hear relatively loud, musical noises when the patient breathes for you.

Of course, there are a number of lab tests and X-rays that are useful to evaluate this condition, but they will likely be inaccessible in a major disaster or collapse. This is why it is so important to learn basic physical examination skills now.

The cornerstones of asthma treatment are the avoidance of “trigger” allergens and the maintenance of open airways. Medications come in one of two forms: drugs that give quick relief from an attack and drugs that control the frequency of asthmatic episodes.

Your survival group members with asthma should have accumulated a good collection of inhalers. Quick relief drugs that open airways (known as bronchodilators) include Ventolin, Albuterol, and Proventil, among many others.

These drugs should open airways in a very short period of time and give significant relief. These drugs are sometimes useful for people going into a situation where they are exposed to a “trigger”, such as before strenuous exercise.

Don’t be surprised if you notice a rapid heart rate on these medications; it’s a common side effect. By the way, physicians are usually sympathetic to requests for extra prescriptions from their asthmatic patients.

If you find yourself using quick-relief asthmatic medications more than twice a week, you are a candidate for daily control therapy. These drugs work (when taken daily) to decrease the number of episodes and are usually some form of inhaled steroid. There are long-acting bronchodilators as well, such as Atrovent.

Another family of drugs known as Leukotriene modifiers prevent airway swelling before an asthma attack even begins. These are usually in pill form. Often, medications will be used in combination, and you might multiple medications in the same inhaler, such as Advair and Symbicort.

It’s important to figure out what allergens trigger your asthma attacks and work out a plan to avoid them as much as possible. This includes pet dander, cigarette smoke, chemicals, and others.

Various breathing methods are thought to help promote well-being and control the panic response seen in asthmatic attacks. Asthmatics tend to breathe faster than non-asthmatics, and many also tend to be “mouth breathers”.

This exposes the lung to cooler and drier air, a possible asthma trigger. Breathing exercises that encourage shallow breathing at a controlled rate may actually reduce asthma symptoms and the need for medicine.

Inhale slowly through your nose and then exhale through pursed lips, or exhale slowly as though you were going to whistle… When you inhale, your abdomen should expand (not your chest). Exhale slowly with your abdomen going inward. Make sure that your exhalation is twice as long as inhalation. This is similar to breathing techniques taught in Yoga classes.

In mild to moderate cases, you might consider the use of natural remedies. There are actually quite a few substances that have been reported to be helpful:

Ginger and Garlic Tea: Put four minced garlic cloves in some ginger tea while it’s hot. Cool it down and drink twice a day. Some have reported a beneficial effect with just the garlic.

Other herbal teas: Ephedra, Coltsfoot, Codonopsis, Butterbur, Nettle, Chamomile, and Rosemary all have the potential to improve an asthmatic attack.

Coffee: Black unsweetened coffee is a stimulant that might make your lung function better when you are having an attack. Don’t drink more than 12 ounces at a time, as coffee can dehydrate you. Interestingly, coffee is somewhat similar in chemical structure to the asthma drug Theopylline.

Eucalyptus: Essential oil of eucalyptus, used in a steam or direct inhalation, is well-known to open airways. Rub a few drops of oil between your hands and breathe in deeply. Alternatively, a few drops in some steaming water will be good respiratory therapy.

Honey: Honey was used in the 19th century to treat asthmatic attacks. Breathe deeply from a jar of honey and you should see improvement in a few minutes. To decrease the frequency of attacks, stir one teaspoon of honey in a twelve ounce glass of water and drink it three times daily.

Turmeric: Take one teaspoon of turmeric powder in 6-8 ounces of warm water three times a day.

Licorice and Ginger: Mix licorice and ginger (1/2 teaspoon of each) in a cup of water. Warning: Licorice can raise your blood pressure.

Black Pepper, Onion, and Honey: Drink ¼ cup of onion juice with a tablespoon of honey, after adding 1/8 tablespoon of black pepper.

Mustard Oil Rub: Mix mustard oil with camphor and rub it on your chest and back. There are claims that it gives instant relief in some cases.

Gingko Biloba leaf extract capsules: Thought to decrease hypersensitivity in the lungs; not for people who are taking aspirin or ibuprofen daily, or anticoagulants like Coumadin.

Vitamin D: Some asthmatics have been diagnosed with Vitamin D deficiency.

Lobelia: Native Americans smoked this herb as a treatment for asthma! instead of smoking, try mixing tincture of lobelia with tincture of cayenne in a 3:1 ratio. Put 1 milliliter (about 20 drops) of this mixture in water at the start of an attack and repeat every thirty minutes or so.

With a number of these substances, further research is necessary to corroborate the amount of effect that they have on severe asthma, so take standard medications if your peak flow reading is 60% or less than normal.

Don’t underestimate the effect of your diet on your condition.  Asthmatics should:

Acupuncture is thought to have some promise as well in treating the condition.

You might have been taught not to believe in natural remedies, but why not use all the tools at your disposal?