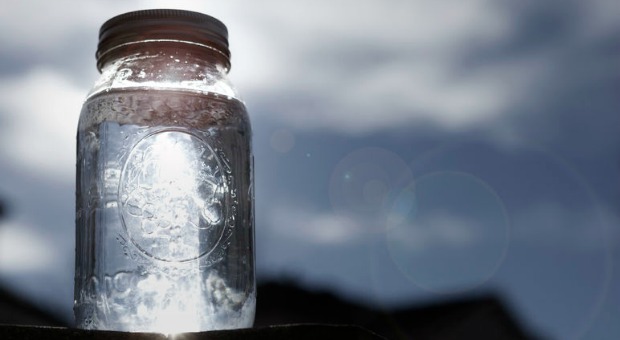 How To Can Water At Home

We’ve had some questions about canning water and to be honest, I’ve never really given it much thought because I just have bottled water stored, along with purification tablets.

I’m the first to admit that I thought the idea was a little over the top because of the expense and unwieldiness of canning jars, but after researching how to can water at home, I’ve changed my tune a bit, just like I did when I first heard about canning butter.

After I had a jar of spaghetti sauce fall over in the canner and break because I didn’t have a full canner, I started filling my canner with jars full of water. I’ve always just left the lid off and used it as a place holder, but then I saw the suggestion to boil the water first, then put it in a sterilized jar with a ring and seal and let it process along with whatever I was canning.

Still, I didn’t give this much thought because I didn’t want to waste a good seal on water. But – read on! Somebody suggested re-using an old seal. Obviously, I won’t do this with canned food because I have absolutely no desire to waste the food or risk botulism if the jar doesn’t seal, but if you’re only canning water, does it really matter?

I mean, you can look at it from one of two ways – if you really want it to seal, you can just dump the jar or use it to water plants, or even pop it in the fridge and have a nice cold jar of water to drink later. Nothing at all lost.

How many of us have stored tap water in soda bottles or rainwater in barrels? Storing unsealed water really isn’t any different than that, though I may suggest that you purify it before you drink it just like you would any of your other water if it’s not sealed.

I also found a suggestion that supposedly came from a Mormon lady – when you empty a jar of food, wash and sterilize the jar and seal and re-can water in it. Otherwise, you’re just going to throw away the seal and have an empty jar sitting around. When you look at it that way, it does make sense. The jar’s going to take up the same amount of space whether it’s empty or full.

Canning  Water by the Book

If you want to ensure that your water is just as safe to drink as your canned foods are to eat, then follow the same procedures. Boil the water for at least 3 minutes – 5 if you live at elevations above 3000 feet – and sterilize your jars and seals. Pour the water into the jars and process in a pressure canner (it’s low-acid like meat and some vegetables) for 20 minutes, leaving at least 1/2 inch headspace.

Now, that being said for safety reasons, I don’t think pressure canning is actually necessary as long as your jars were sterile and your water was boiled because you’re not canning food that can spoil.

This can still be done while you’re canning other foods if you don’t want to just can a batch of water. Or, if you’ve decided that it truly is a waste for all of those jars to be sitting empty, then do a couple of batches.

Everybody in my family loves dill pickles, so I usually buy the gallon jars of them, then turn around and use the jars for pickled eggs later. Either way, I still have extra gallon jars sitting around taking up space because it kills me to throw them away. So, I decided to be bad and re-use the commercial lid that it came with to store water that I’d boiled.

Now that jar is actually being useful instead of sitting on the shelf taking up valuable real estate. I’m seriously liking this idea; it appeals to me on several levels – I’m not wasting jars or lids and filling landfills by throwing them away, my unused jars aren’t wasting valuable space, I have even more water on hand, and it’s free. Color me converted.

As long as you boil your water as indicated and sterilize your jars ahead of time, and then follow the processing time that we use to kill germs in everything that we can, then yes, the water will be sterile. Oh, and as long as it seals. Basically, it’s just like any other canned food.

Honestly, I think that processing it may even be a bit overkill as long as the water is boiled and the jars are sterilized, but better safe than sorry. If you’re going to do it, do it right, I guess. Still, I have water stored in well-washed Coke bottles and juice jugs (BPA-free, of course), so I’m not necessarily buying into the whole need for utter sterilization.

One instance that I can think of that would be an excellent reason to store sterilized water? For medical uses such as cleaning wounds. At that point, since infection is going to be such a huge deal if professional medical help and supplies aren’t available, sterile water would be an excellent commodity to have.

How to Revive the Flavor

After water sits in a container for a while it starts to taste flat. This is because it loses its oxygenation. There’s a simple fix – just shake it up or pour it back and forth between two jars. It still may taste a little flat, but it’s perfectly safe to drink.

As with any stored item, I highly suggest recycling it – in this case, every few months. Don’t pour it down the drain, though. Either drink it, make tea with it, or water the plants – do anything with it. It’s still good, and it would be a waste to just pour it out. Yeah, I realize it’s “only” water, but with the way things are going, it’s becoming a finite resource, so get it’s best to get in the habit of not wasting it now rather than later.

As I said, the idea of canning water sounded silly to me when I was first asked about it, but now I can see the value in it, from several different perspectives.

Next time you have extra space in the canner or empty a pickle jar that you intend to save, store some water instead of just wasting space!

Now that you know how to can water, learn how to DIY your own portable device for an endless water supply.