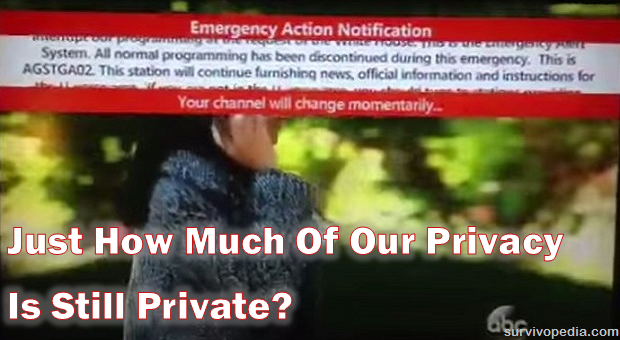 Just How Much Of Our Privacy Is Still Private?

On Friday, October 24th, people’s televisions and radios went off with the tone and graphics to announce an emergency message. We’ve all heard these throughout our lives, as part of the National Emergency Broadcast Network. It’s a manifestation of how the federal government thinks it owns the airwaves and can preempt commercial broadcast whenever it wants.

This announcement was a little different than most though. First of all, there was no announcement that it was a test and only a test. Secondly, it said that broadcasting was being interrupted by the White House, rather than the FCC (Federal Communications Commission). Finally, the alert automatically tuned people’s televisions to the channel for the emergency alert and wouldn’t allow them to change it back. 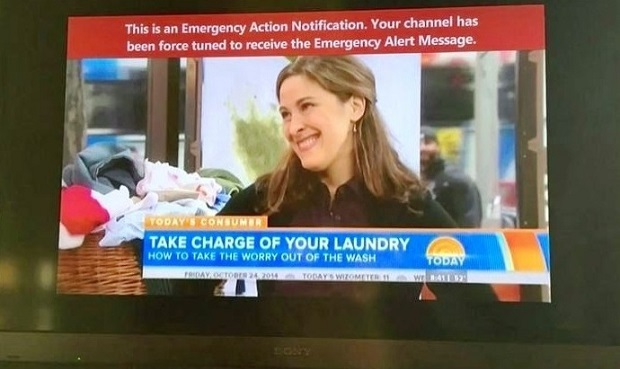 Radio and television stations are required by FCC regulations to have an automatic EAS (Emergency Alert System) black box connected to their system. The only purpose it serves is to allow the federal government to take over all commercial transmissions to make emergency announcements.

In the midst of rising concern about the Ebola crisis, such an alert could cause a panic. Between the lack of confidence most people have with the current administration and people not knowing what’s going on, conspiracy theories have been popping up right and left.

An alert of this type would play on people’s fears, convincing them that there was important information that they weren’t receiving and that some disaster was about to take place. From there to full panic is only a small step.

While the emergency broadcast system is an excellent idea, it is flawed. This isn’t the first time an erroneous alert has gone out. While false alerts aren’t all that common, they have happened. Each one gets explained away as a mistake, but not before raising a lot of people’s blood pressure.

This isn’t limited to radio and television either. Apparently the government has the ability to tap into cell phone systems as part of the same emergency alert system. Few people know about this ability, but it moved out of the shadows when the first accidental emergency alert went out over people’s cell phones.

The bigger question isn’t what the government can send to our phones, radios and TV sets, it’s what else they can do. Rumors have abounded for years about the government being able to tap into cell phones, computer webcams and other personal electronics to spy on us.

The problem is, we really don’t know if they can or not. The government isn’t telling and there are few people who have the capability of telling what secrets our electronics hold.

Even the engineers who design our personal electronics are somewhat limited in their understanding. So many things today are taken care of by “black box” integrated circuit chips, which contain a number of functions.

Generally speaking, the design engineers don’t even know all the functions that are contained, just the ones which they have to work with. So the integrated circuit manufacturer could put functions in there, driven by government mandate, which nobody would know about.

If that’s being done, it’s being kept quiet. But then again, it’s really not all that hard to keep things like that quiet. With all the thousands of employees that the NSA (National Security Agency) has spying on American citizens, we’ve really only had one whistleblower come forward. His fate has definitely discouraged others from following suit.

When a Good Deal Turns Into Evil

There are commercial services which allow parents to spy on their children’s cell phones. They can track calls, text messages, read e-mail and track where they are through the GPS (Global Positioning System) function. If that’s not enough, they can also track internet usage and look up the names and addresses of their children’s friends in the address book.

If parents can do this through a commercial service, what can the wizards at the NSA do? What’s to keep them from monitoring your every action, listening in on your every conversation, keeping an eye on where you are and watching your actions through the camera phone? I’ll tell you what… absolutely nothing.

The Obama administration and the government in general have made it clear that you have no rights or privacy, when it comes to any information that you allow anywhere near an internet capable device. They can and will spy on it, collecting it and analyzing it for any seditious content. If they find any, you can count on them watching you like a hawk, just waiting until you make a mistake that they can use to their benefit.

The problem is that we really don’t know how much the government is spying on us or what criteria they are using to determine that someone is a “threat.” There’s been a lot of talk about conservatives, Christians and others who are not in lockstep with the progressive liberal agenda being marked as potential terrorists.

If the information that is being used to make those determinations is coming from our communications, then it is a totally illegal government operation which could ultimately lead to the death or imprisonment of people whose only crime is to not be a liberal.