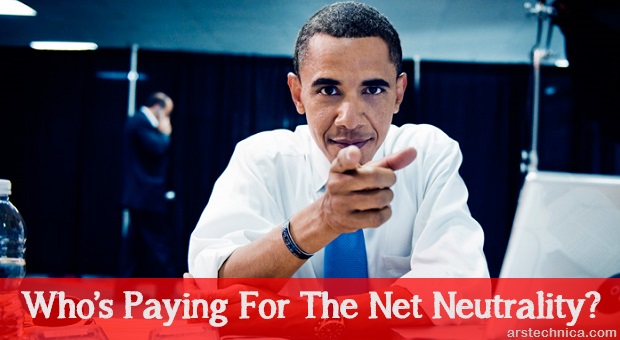 Who’s Paying For The Net Neutrality?

Obama has done it once again… starting a firestorm of controversy over something that doesn’t seem to need it. Or maybe it’s the media who’s starting the controversy. Either way, it’s clear that Net Neutrality has become a hot topic amongst the chattering class, most of whom don’t know any more about it than what they hear in sound bites.

Before Obama became elected the first time, he went on record stating that he was in favor of net neutrality and would push for it if elected. In his first term, he directed the FCC to draft regulations to that effect and everything seemed to be running smoothly.

Now, thanks to a court case, those regulations have been thrown out the window. Even more surprisingly, the president seems to have flip-flopped on his stand.

What Net Neutrality Is About

The basic concept of net neutrality is that the internet provides equal access to all, both those who are posting information to the internet and those who are searching for it. The mechanism to guarantee this neutrality has been regulating the “packets” of information that are transmitted from one location to another. Each of those packets has to receive the same priority, so that everyone’s information makes it to its destination.

In reality, the internet has never been totally neutral. Each user pays a fee for their internet access and each company or individual who uploads data to the internet pays for space to house that data. In this market forces take affect and those individuals and companies pay for the level of service they get.

Part of what net neutrality means is that major internet users such as Netflix and YouTube, who pass massive amounts of information across the internet, should receive the same level of service as a teenager who has their own blog.

However, if those two companies, and a handful of others, received the same service that everyone else received, we’d never see the results of our Google searches or Facebook pages download. Just Netflix and YouTube account for the majority of the data passed across the internet today. They have to have different service, so that you and I can enjoy our movies, as well as all the rest that the internet has to offer.

The current debate isn’t over keeping things neutral, although that’s what’s being said; it’s over creating “fast lanes” and “slow lanes” on the internet. That’s what Obama has instructed the FCC to look into and develop regulations for. In other words, the FCC is going to regulate what’s already happening on the internet.

Okay, so where’s the catch in all this? First of all, in order to do this, the FCC is going to treat Internet Service Providers (ISPs) as public utilities, whose operations are then regulated by the government. This gives the government and the NSA an open door to get more access into and control over the internet.

Really, that’s what it’s all about; expanding big government. The Democrat/liberal/progressive mindset can’t allow anything to happen, without them regulating it. They are after totalitarian control and this issue of net neutrality gives them one more step to use in order to gain it.

The question we really need to be asking ourselves is what’s the end game going to look like?

First of all, once the internet officially has fast and slow lanes on it, you’ll have to pay for access to the fast lane. That will cause the ISPs to pay more attention to the needs of the fast lane and maintain it better. Over time, the slow lane will get slower, because it won’t get the attention and maintenance it needs.

So, anyone who wants good service, either for their business or for their personal use, will end up having to pay extra for it.

Speaking of paying extra, if ISPs are treated like public utilities, then you can pretty much count on internet service costs going up. We can also count on internet service getting worse, because the ISPs won’t be trying to satisfy customers, but government regulators. The same sorts of government regulations which are placed over power companies and the phone company will be placed over the internet, further complicating things and driving up costs.

Another risk included in the government treating ISPs as public utilities is that they will then require that equal service be offered to all. There is actually precedent for this, as it has already happened with the phone company. Regardless of where you live in the United States, the phone company has to provide you with service, regardless of cost. What that means is that in cases where it isn’t financially feasible, they are forced to do it anyway and pass the cost on to everyone else.

We’re also going to see the government using strong-arm tactics to gain access to more and more of our data. ISPs who refuse to grant the NSA access to your and my data will find themselves under investigation; either by the IRS or by the regulating body. They might even lose their license to provide service.

We’ve already seen this sort of tactic used against businesses which the Obama administration doesn’t agree with, why would we expect anything else in the future?

To date, the internet has done a good job of regulating itself. There really is no reason for the government to get involved, except for that liberal mindset of controlling everything. If government will leave it alone, everyone will get the service they need.

But if the government gets their sticky fingers in there, then we can expect more and more infringement on our rights and an increase in costs. Those costs will of course be passed on to the consumer, so that you and I can pay more government bureaucrats to interfere with our lives.

Net neutrality truly is about freedom; but not the way that it’s being reported. It’s not to give the little guy equal access with the big guy, but to keep our information out of the hands of the government.

Like usual, the real issue is being hidden in a pile of red tape and legal mumbo-jumbo, then misreported in sound bites and cute catch phrases. But that doesn’t hide the fact that it’s there; just hides how easy it is to see.