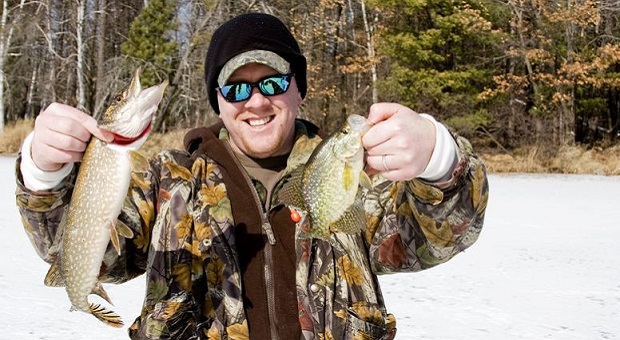 Fishing Like a Pro: Basic Guide For Winter Fishing

The greatest challenge in winter survival is finding enough food to eat. Animals tend to migrate to warmer climates, hibernate or just plain become less active as they try to deal with the cold and survive. That makes hunting them more difficult, as you almost have to step on the animals to find them.

Fishing is not a whole lot better, as fish become less active and move to different areas as well. Being cold-blooded creatures, the metabolism of the fish slows down in the cold of winter, reducing their need for oxygen and food. While many think that they stop eating in winter, that’s not true. Fish will still eat in winter, although they don’t need as much food as they do in summertime.

Although more challenging than fishing in the summer, it is still possible to fish in the wintertime, finding food for yourself. Your fishing techniques need to change some and you need to understand where to find the fish, but if you have patience, you can still fish quite effectively.

Where to Find the Fish

Even though the fish’s metabolism will slow down from the cold water, they will still have needs. Those needs will dictate where the fish will be found. If you can understand those needs and seek to fish in the areas where those needs will be met, you have a much better chance of catching fish.

The first need for all fish will be to avoid freezing. Water expands when it freezes and most cells are over 90% water. So, freezing literally tears the cell membrane, killing the cell. While fish don’t understand the science behind this, they will seek areas where the water is warmer.

Fish also need oxygen, so they will seek areas where the water is likely to be well oxygenated. When it comes to a choice between the two, they will try to find a point where both needs are met.

Moving water provides a couple of advantages for fish. First of all, it won’t freeze, even if the air temperature drops well below zero. So, moving water will keep warmer. It will also have more oxygen in it, as well as a greater possibility of bringing food to the fish.

They won’t want to be in areas where the water is moving enough that it causes them to have to swim to maintain position, but rather relatively calm areas, like pools, where the moving water will bring those needs to them.

Trout live in rivers and streams. During the warmer parts of the year, they are typically found in the pools and riffles of the stream. During winter, they tend to congregate more than in warmer weather. They will seek out a deeper pool which offers good protection from predators. Logjams are excellent for this, providing the trout with a place to hide from those predators.

The water will need to be at least three feet deep to insulate the fish from the colder air. If there is a spring nearby, the fish will most likely pick a pool just downstream from the spring. Groundwater is warmer than surface water during the winter, so that spring will warm up the water coming into the pool.

However, groundwater usually doesn’t contain much oxygen, so they will need to be far enough downstream to allow the groundwater to mix with the water of the stream.

Bass live in lakes and ponds, rather than streams and rivers. During the cold weather, they are more likely to go deep to avoid the colder surface waters. This makes it harder to fish bass in larger bodies of water. However, smaller bodies of water generally aren’t that deep, so they can still be fished effectively.

The best places to start looking for bass are around rocks. If there are partially submersed rocks in the water, they will warm up faster from the sunlight, warming the water slightly around them. The same can be said for levees and earthen dams. Use a jerkbait, but keep it still in the water, as the fish aren’t moving as fast.

Sunny days, above 40 degrees, will warm the water, making the fish more active. This is especially true for smaller bodies of water. A large lake may need two weeks of good sunshine to warm it up, whereas a pond can warm in a matter of hours. Give the sun enough time to warm the water and then go fishing. Noontime or slightly later is excellent.

Catfish especially like deep pools in the winter. A slow current is ideal, as that will float food past the catfish. However, you don’t want a rapid current. Pools located downstream of large rocks or trees to block the current provide the fish with a good place to hide and wait for food to come to them.

If there are bait fish in the water, that’s a good place to look for catfish. The baitfish will congregate in schools and the catfish will often be right below them. If you have a fish finder with a zoom capability, you should be able to spot them easily.

The American Indians used spears to fish in the wintertime. Fish are moving slower, due to their reduced metabolism, so it’s easier to spear them than it would be in spring or summer. The spear they use is a three pronged spear, with the prongs made either of bone or metal (copper was popular). You can accomplish the same thing with a good hardwood, but it won’t last as long.

Spear fishing requires wading out into the water to find the fish. A good pair of waders is essential for this, or the icy cold water will steal your body’s heat. If you don’t have fishing waders, you can use large plastic garbage bags, tying or taping them over your clothes. Wear multiple layers of pants and thermal underwear if you have them, to help keep your legs warm.

This article has been written  for Survivopedia by Dave Steen from Preppingplans.

Dave is a 52 year old survivalist; father of three; with over 30 years of survival experience. He started young, learning survival the hard way, in the school of hard knocks. Now, after years of study, he's grey-haired and slightly overweight. That hasn't dimmed his interest in survival though. If anything, Dave has a greater commitment to survival than ever, so that he can protect his family. You can learn more about Dave on his site, PreppingPlans.com