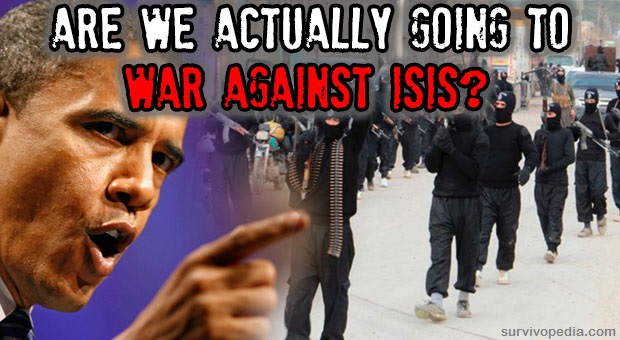 Are We Actually Going To War Against ISIS?

This last week, President Obama sent a war authorization request to Congress. This request is supposed to specifically deal with the threat of ISIS; the same organization that Obama has called the JV team and whom he has said “was not Islamic.”

This request on his part actually seems a little strange, in light of how Obama’s previous statements and actions about ISIS.

Since only Congress has the authority to declare war, this almost seems like an appropriate action on the president’s part, actually following the law for a change.

But I’m not so sure. Up until now, all the actions he’s taken against ISIS have been based upon the 2001 and 2001 war authorizations, which have sufficiently broad language as to make his actions at least seem legal.

If Obama has been able to bomb ISIS for six months based upon two previous authorizations, WHY does he need a NEW one now?

When I run across questions like this, I have to remind myself that for Obama, everything is politics. It doesn’t matter if it’s right or wrong, if it will work or not work, just as long as he can use it to further his political agenda.

So, that makes me wonder if this step is designed more as a preparation for another round of mud-slinging at the Republicans, or if he has some other plan up his sleeve.

Looking at the authorization he requested, one can clearly see how little understanding Obama has of the military and warfare in general. In many ways, he’s tying his own hands in the war; limiting the military’s ability to respond to threats in certain ways.

For example, he’s document puts severe limitations on troop deployments and use, as if the war can be won from the air. This war, like any other war, won’t be won unless there are troops on the ground, occupying the space that the enemy currently occupies.

Then there’s the time limit on the request. Obama is only allowing three years for the completion of the war. After that, apparently all American military forces have to pull out of the theatre of combat.

While both Gulf Wars were fought in “hyperwar” mode, with the major fighting completed in an amazingly short period of time, the attacks by insurgents carried on for years. In fact, the rise of ISIS can be seen as the outgrowth of insurgent attacks.

Here’s THE PROBLEM, as I see it.

The enemy isn’t as stupid as we’d like them to be. They can read our laws, just as well as some Washington journalist can and if they can’t, they can probably get the journalist to do it for them.

So, ISIS is going to know every limitation that is in that authorization. Actually, they probably already know it. If you were an enemy commander and you saw limitations in America’s plans for how to wage war, what would you do? You would find ways to use those limitations to your advantage, right?

Well, why would anyone think that ISIS won’t do the same?

So, if this authorization passes, our government will essentially have told the enemy some key parts of our strategic plan. We would have given them information that they would otherwise have had to pay blood to get.

By doing so, we would have made their job easier. They would know that they only had to hang in there three years, and the United States would be out of the war. Shoot, all they’d have to do is lay low for a while and wait for us to leave.

Of course, without boots on the ground, our means of taking the war to the enemy will be extremely limited. They’re going to know that too. So, we’ll have told them where to concentrate their efforts to avoid our military intervention. Sounds like pure hogwash to me.

Then there’s another sticky part of Obama’s request, which may or may not be a problem. He has asked for global authorization to fight ISIS or anyone associated with ISIS. That doesn’t really sound all that bad; it actually sounds like something he should be asking for.

But then, the DHS has been working overtime to categorize conservatives as terrorists, while removing terrorist organizations from the “official lists.” In fact, the State Department now says that ISIS isn’t a terrorist organization, but rather a “full-blown army, seeking to establish a self-governing state.”

Only time will tell on that one.

With such a poorly crafted war authorization coming out of the White House, I have to wonder what the true purpose is. Is Obama trying to get a jump on Congress and put something in place that will force him to not take the war to the enemy? Is he trying to get a blanket authorization which will allow him to do something else entirely? Or, is it like many other things, nothing more than a political symbol?

If Congress passes the authorization anywhere close to the way it is written, it will probably be disastrous. That will give Obama the opportunity to point the finger at Republicans once more, talking about how they have prevented him from carrying out his responsibilities. Why not, he’s done it on everything else?

{adinserter usf}As much as I’d like to see us take some serious action against ISIS, this doesn’t seem to be the way.

But perhaps it can open up a discussing, in which Congress can push for truly going after ISIS and wiping them off the face of the Earth.

If it does start that conversation, then I’d have to say “hats off to you, Mr. President.” But I’m not holding my breath, waiting to say that.

Of course, the other little detail is that just because Obama has an authorization, that doesn’t mean he’s actually going to go to war. After all, this is an Islamic organization; as we know, he supports them.

So, if any war authorization passes, there’s something else I’m not holding my breath for… Obama actually making any attack against ISIS or any other Islamic terrorist organization.