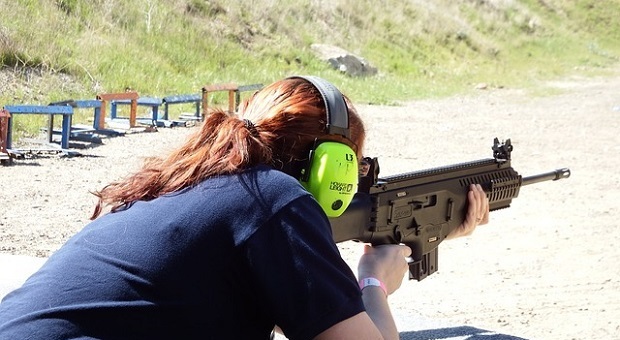 In the brainwashed minds of anti-gunners, women sit around like Sleeping Beauty and only wake up when some charming, rich prince gives them a kiss. But in our real world, women are routinely raped, robbed, murdered, beaten, and tortured because they cannot defend themselves against criminals and terrorists.

To make matters even worse, gun grabbers and gun control advocates want to enforce a poisonous doctrine that will leave women demoralized and worse off than expected if a major social collapse occurs.

Have a look at how gun grabbing advocates routinely use social pressure to bully and intimidate women into believing that self-defense and personal safety are not as important as “the higher civic good”.

Birth Control and Abortion are Touted in Place of Self Defense

It is no secret that anti gunners routinely seek to brainwash women into believing that birth control and abortions will solve all their problems. If a woman using birth control is raped, why should she worry about defending herself since her risk of getting pregnant is lower? And, if “the pill” fails, rape doesn’t really matter because she can just go get an abortion.

In the meantime, any woman that uses birth control or has an abortion becomes controlled by nanny state paid doctors instead of welcoming and responsibly wielding the creative powers that are a woman’s God given right.

To the anti-gunners, a woman is little more than an animal best left to the mercy of criminals, terrorists, and rioters because a woman that can defend herself with a gun is a danger to their socially destructive and demeaning agenda.

Even as I write this, women (and men) are being given misleading and dangerous information about situations that are best handled with a gun. For example, a number of videos recently issued about how to handle a shootout invite people to remain impotent instead admit that the only way to stop a criminal or terrorist with a gun is to shoot them before they have a chance to hurt others.

As every prepper and survivor oriented person knows, if we work as a team and accept each person’s right to self-defense with a gun, we would not have these mass killings.

Core Curriculum and other “progressive” education programs over the years aim to brainwash young women into thinking they are “liberated” because they can have sex with any male they want. Once a young girl or woman adopts such an irresponsible ideology, it is much less likely she will even realize she has been raped, and therefore she will never even consider that she, and other women need unfettered access to guns.

In fact, these days Core Curriculum sex ed teaches young women that abusive relationships are “ok” because they can “deepen” the emotional bond between the couple. In this paradigm, a young girl that would instinctively say “no”, file criminal charges, take a self-defense class, or get a gun will simply go on in a depressed state instead of actively seek to survive and thrive regardless of what is going on in the world.

On the other hand, it is very obvious that a woman who seeks to own a gun and knows how to use it will never follow, let alone be intimidated by a sexist agenda that is as harmful now as it will be in a social collapse scenario.

Anti-gunners Stack the Deck Against Women 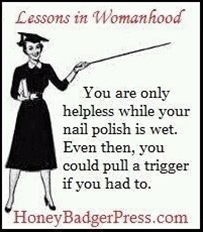 Did you know anti gunners routinely tell women that if they are attacked, all they have to do is blow a rape whistle and pee on the aggressor as an “act of deterrence”? I kid you not.

In reality, Sleeping Beauty doesn’t have a half hour or more for police or other assistance to arrive because the average crime happens in less than 10 minutes.

Clearly, the anti-gunner’s fairy tale based agenda makes it easier than ever for criminals to succeed, and therefore encourages them to take advantage of any and every opportunity that they can get to harm women.

Needless to say, no matter whether an EMP causes a social collapse, a nuclear strike, or a major financial collapse because of currency manipulation, women without guns will be at a severe disadvantage.

The more laws there are to increase the cost of guns or make it harder to get them, the larger the number of women affected by this problem. Never forget that large numbers of men have owned guns for centuries, however women have a long way to go to catch up.

Anti-gunners have been known to suggest that women are too weak to have guns. That statement alone can be easily enough debunked by every woman in militaries, law enforcement, and intelligence agencies throughout the world.

Beyond that, historically speaking it is a well-known fact that some of the fiercest and most powerful warriors are women. Aside from being the social pillars of a society, it is also said that no culture or society can be called dead until the women have been conquered.

As self-evident as it may be that women are more than strong enough to carry and use guns effectively and safely, there is another huge, sexist, and completely demoralizing tone implied by this aspect of anti-gunner irrationalism.

Along with bringing us Common Core sex ed, most anti-gunners also believe in Darwin’s Theory of Evolution. Now regardless of whether or not you believe we all came from a pack of monkeys that evolved across time, the Theory of Evolution also maintains that only the fittest have the right and privilege to pass on their genes to the next generation.

From that perspective, there can be no doubt, in my opinion; when an anti-gunner says women are too weak to use guns without permission of the government; gun grabbers are suggesting that women of all color should just drop dead. In this way, the evolution of our species can be carried on only through hand-picked elite women who just happen to be protected around the clock by guns paid for by our tax dollar!

In the meantime, thousands impoverished black and Hispanic women living in Section 8 housing are raped, murdered and robbed because they are not allowed to have guns.

Today, many anti-gunners run around saying that guns are the only object we have that is used almost exclusively to take life or injure others.

Consider that when someone is texting while driving, high on drugs, drunk, insane, or whatever, an armed person aware of the situation can shoot out the erratic driver’s automobile tires before they drive that vehicle into a crowd and kill or injure dozens of people.

In a society where motor vehicles are the greatest lethal weapon to us and our planet, it is a true shame that guns are not seen as a viable answer to pedestrian hit and runs and other vehicular murders. In fact, anyone that is a victim of a vehicle pedestrian encounter, and their families should sue anti-gunners because the victims did not have a gun on hand to protect themselves from the vehicle.

Beyond this, anti-gunners don’t want women to know that every single woman regardless of color, sexual orientation or creed can use guns to save lives and alter the path of society in order to slow down or even prevent a complete collapse. This includes situations where people wearing suicide bomb vests murder and injure hundreds of innocent people because no one can get to them and stop them in time.

Given that a bullet travels at around 2,500 feet per second, rest assured that an armed woman can, in fact, stop ISIS and other terrorists in their tracks and in real time.

What Can We Do About This Problem?

According to a number of polls, the Republican party and agenda has been consistently labeled as being against the best interests of women. However, when you stop and look at the facts, you soon come to realize that the worst sexists in our nation are little old white men hiding under the pant suits of little old white women that act as the puppet mouth pieces for anti-gun legislation.

When a poor woman of any color is told that she can only defend herself against rape, murder, mugging, or terrorists by peeing on an attacker, there is something grossly wrong with what we define for and against a woman’s best interest.

In the upcoming election, it is our duty to send anti-gunners the message that it is time to accept a woman’s God given right, and her Constitutional right to self-defense against criminals and terrorists using any gun that she chooses.

Unless you speak up and demand government do your will, there will continue to be exploitation, injustice, and an increased risk that our society will be ripped out from under us. When you allow others to dictate how you choose to defend yourself, and control when, where, and how you come to own or use a gun, then you become prey to everyone that wants to take something from you.

As with the founding fathers of the United States, pro-gun advocates would rather see you defend yourself than wind up dead because laws driven by what appear to be closet sexists aim to prevent you from having the best tools available for self-defense.

In an extension of that belief, when a nation is filled with strong people able to take care of themselves, the entire nation benefits and becomes a true model of the sum being stronger than the whole. Even in a situation where a gun fight is lost by the “good guys”, at least they, and those around them know that they still had a chance to win instead of die begging for their lives from immoral and corrupt people that only want to kill and maim.

Let’s make America better than she was yesterday and make gun rights the ultimate and absolute litmus test for who gets voted into office in November 2016.