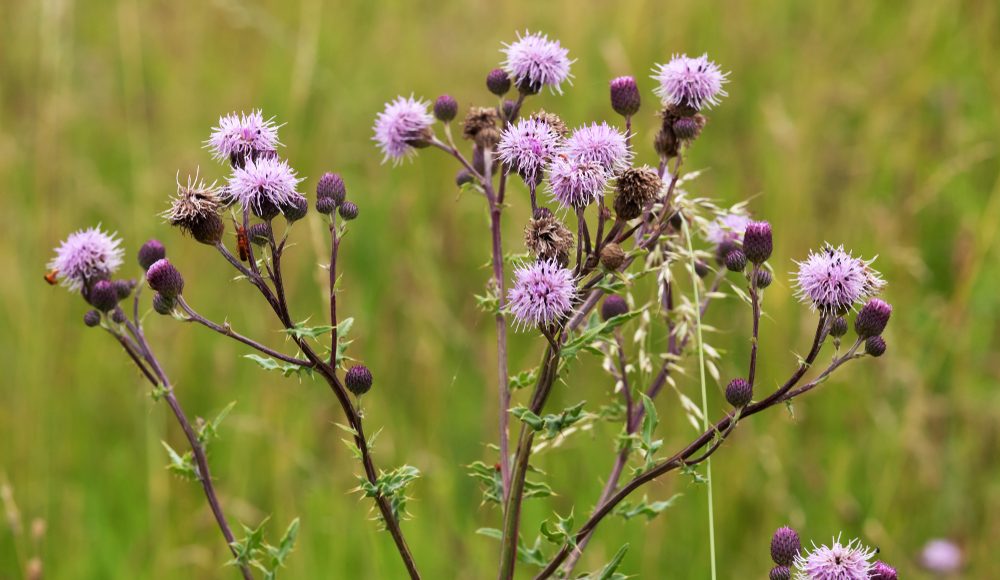 The thistle gained a bad reputation when people interacted with its prickles and when it made its way onto their properties.

Livestock owners hate it and see it only as an invasive plant, especially since few domestic animals will feed on it. Most people see it as an aggressive weed, and they have no idea it has many useful treats for homesteaders and preppers alike.

Truth be told, once the plant makes its way into an unused field, it will be quite hard to get rid of it. The thistle is an invasive species that spreads rapidly in disturbed soil and compete with cash and food crops for space, water, and nutrients in the soil. Thistle can be found almost everywhere, and they thrive when growth and reproduction conditions are favorable.

Singularly or in patches, the plant prefers dry rocky or moist sandy soils of forest clearings, swamps, pastures, meadows, open fields, roadsides, railway roadbeds, and you will also find it along the banks of streams and rivers.

In mountainous regions, the thistle can be found in open sunny slopes or in the cracks of steep cliffs. The plant has a worldwide range of distribution from North America (Canada and Mexico included) to Europe and well into the mainland of Asia. It thrives in predominantly temperate to subtropical climatic regions.

Contrary to popular beliefs, the plant didn’t always have such a bad reputation. In ancient times, it was a revered plant, and it was sacred to those believing in mythology. It was considered the plant of Thor, the god of lighting, and people often wore sprays of thistle to protect them from lighting, especially during farming times.

This prickly plant has some fame as the national flower of Scotland. It was credited with saving the Scots in 1263 from an invasion by the fearsome Danish Norsemen. Ruthless hordes of fearless invaders landed upon the shores of Scotland to take the land by force.

Eager for battle, the Danes failed to prepare breastworks to protect their landing boats. Removing their footwear, they attempted a bold tactic of a night attack upon the unsuspecting, sleeping Scots.

The barefoot warriors encountered no problems until they accidentally discovered the prickly thistles growing in the open fields surrounding the encampments. Startled screams of pain and shock alerted the gallant defenders, and a great battle began. On that day, few Norsemen escaped vengeance as the invaders were driven back to the sea.

Regardless of its rich cultural history, the plant has usage in home remedies and self-help medicine. It gained popularity in the Dark Ages as a remedy for various infectious diseases. Thistles saved Emperor Charlemagne from defeat. The thistle’s roots were made into a healing medicine for his disease-plagued armies. Their good health helped to turn the tide of battle to his favor.

How to identify the plant

The thistle is an annual, biennial, or perennial herb. It’s perhaps one of the easiest plants to identify. Thistle has a fleshy taproot on horizontal or vertical root-stocks and numerous side roots. Most are spindle-shaped and may be swollen or filled with fibers. Roots are usually white or may be tinted the color of their soil matrix.

Thistle stems are straight, erect, and may be either branched or un-branched. They may grow up to six feet tall and be covered with white woolly hairs. Stems may have spines or be without. Cut stems may ooze a clear to whitish-yellow colored sap. The sap has a biting or bitter taste. Stems become hollow at maturity.

Leaves are basal, clustering around the stems. Leaves may or may not have leafstalks or petioles. Each basal leaf is 5 to 10 inches long, lanceolate or spear-shaped, and divided into deep lobes with coarse teeth. Teeth are armed with sharp, stiff spines. The edges of the leaves are wavy in appearance.

Stem leaves differ from basal leaves, which are smaller and base-clasping. The leaves alternate around the main stems and may be lobeless and spineless. Fluffs of wispy woolly hair may cover the leaves.

The flowering stems are usually covered with sharp spines, intermixed with the woolly hair. The top of these stems is a vase-like green cup covered with green leaf-like, spiny appendages or bracts.

Flower heads may be in clusters at the tops of flowering stems. The flowers come in a variety of colors ranging from white, pink, yellow, purple to rose-purple.

The fruits are big balls of fluffy white or grayish silk held in the erect cups. Numerous seeds or achenes are small, elliptically shaped, flat, and plumed at tips with seed hairs. Dissemination is by the wind.

Thistle as a food source

During primitive times and even those living in current, under-developed countries have learned how to use this plant to their advantage. Almost all parts, except for the spines, can be used for food. The plant can be quite useful in a survival or wilderness living scenario. Roots, stems, young leaves, flower buds, flower heads, and seeds can be eaten.

Historically, the plant was credited with saving lives during famines and times of scarcity. Even the early pioneers used it as food when they had to subsist off the land.

The roots of the plant can be eaten raw or cooked and are often used as a turnip substitute when preparing various dishes. Even more, the roots were often dried and grounded into flour that was used as an extender in soups or stews.

The raw roots were often roasted in an oven at low heat in order to extract the sugary syrup or molasses. Although it has a slightly bitter taste, it can be successfully used as a sugar substitute.

Roots were also boiled and peeled in order to be pickled in brine. In Armenia, the boiled roots are soaked in a cinnamon-flavored syrup to make a traditional sweet-meat used n wedding celebrations.

The peeled sterns are considered to be wilderness thirst-quenchers or nibbles by knowledgeable hikers and woodsmen. They are sweet and juicy and can satisfy your thirst until you can find a source of water. I’ve seen hikers remove the spines of the leaves using scissors and toss them in salads or cook them as vegetables.

Some are eating the leaves raw, but it takes a while to get used to the taste; some say it’s an acquired taste, and only the younger leaves should be used. From the same young leaves, you can make a stimulating tea. Such tea was often used in the wilderness as an emetic, and it helped treat mild food poisoning.

The dried flowers are used as rennet to curdle milk, the primary step in making butter, whey, yogurt, and soft cheese. Since the seeds of the plant are bitter, and you cannot eat them raw, it is recommended to roast the seeds and use them as a cereal substitute.

Herbalists are well aware of the plant’s medicinal properties, and homeopathic medical practitioners state it has the following properties: astringent, cooling, sharp-tasting, diuretic, hemostatic, and anti-inflammatory.

Making a strong tea from the roots and drinking it regularly can stop the discomfort of dysentery, diarrhea, and intestinal flu.

A paste made from crushed roots can be applied as a poultice to infected sores, boils, earaches, and carbuncles. This was actually tested in several medical studies, and it showed good results.

The dried root bark is sometimes held in the mouth for gum sores, lip cankers, or infected tongue. Even more, you can make a dried root powder and use it as a styptic to stop traumatic bleeding in deep, open wounds. Such powder has been used to stop bleeding way before the era of the Roman Empire.

The root powder was often mixed with water and used as a douche to prevent uterine bleeding after childbirth. Making a tea from the same powder and drinking it can control hematuria (blood in the urine).

A dried root decoction can be used in the treatment of hematemesis (vomiting of blood), which is usually associated with a terminally ill patient or accidental ingestion of poison. It was used in the past also to ease the pain of acute appendicitis before surgical removal was done.

Making tea from the fresh young leaves of the thistle is recommended to treat urinary problems, kidney infections, and bladder complaints. Such tea can also be utilized as a wash to treat mild burns or infected areas of the skin.

Athletes in Ancient Greece used a paste made from crushed leaves to ease the muscle pains, neck cramps, and pain from bone fractures. It was effective upon compound or open fractures, where the bone has split the skin.

An early Greek method of treating leprous sores involved the thistle. The juice of mashed thistle leaves was mixed with vinegar and applied directly upon the infection. Treatment continued daily until the sores cleared up.

This is not just folklore medicine, and modern research has incorporated the thistle leaf extracts into experimental medicine and has shown positive results in the treatment of inflammations, sclerosis, tumors, leprosy, and cancer. Purified extracts have been made into specific drugs in Europe as aids in the treatment of cancer and tumorous conditions.

An antimicrobial study of the thistle leaves shows definite beneficial properties. The active principle was extracted by acetone, alcohol, ether, benzene, or water. It showed a natural anti-germ ability by limiting and suppressing the growth of gram-positive and gram-negative bacteria and upon mycobacteria in cultured media.

These are the germs that have caused so much misery, disease, and death, suffered by mankind since antiquity. They can be found in the water we drink, sewage, and the soil.

The flowers and seeds of the plant have been used in medicine, too. Flower tea is useful as a wash for infectious sores caused by venereal diseases, specifically gonorrhea, and syphilis. An extract of the flowers is very effective upon yaws, a sexually transmitted tropical infection. A raw seed decoction boiled with milk is still in use in Europe to treat infant diarrhea.

This amazing plant has contributed to the lifestyle and to the livelihood of the native people who utilize it in their everyday living. In some areas of the world, the thistle is a scarce resource and is greatly sought after for its usefulness. The next time you see thistles, don’t think of how to get rid of the plants, but rather how you can use them to your advantage.