From all sorts of the gun to lasers that could take a whole city out, cinema is all about watching a good old movie about gun control or simple weapon action.

You can be a Nicolas Cage gun movie nut or just love a classic gun smuggling movie. We’ve turned on our best tv outdoor antenna and created a top 10 list of sharpshooters. Ready? In no particular order, let’s find out more.

1. Pulse rifle as seen in Aliens

There’s a reason this has been described as the ultimate badass shooter movie gun. With several explosive tips that rest in its chamber, this is one sexy rifle that shouldn’t be messed with. One of the deadliest things about it is the sizeable pump-action launcher of grenades attached to the side. It is certainly powerful enough to puncture huge gaping holes in pretty much anything and is something the xenomorphic aliens in this brilliant film had to fear. An accurate, reliable, and ultimately devastating piece of weaponry.

2. The zf1 as featured in Fifth Element

The sheepish Emanuel Zorg is a dangerous psycho who is extravagant and completely crazy – his gun reflects all of these parts of his personality. It’s a powerful and compact weapon that can take any spaceship down in one hit. It’s an absolute psycho dream gun. Picture a total Swiss army knife type gun – something for every kind of shooting. Rocket launchers, arrow launchers, machine guns, flamethrowers, and ice cube guns are what every zf1 has attached.

More is more in the case if this particular weapon. Otherwise known as the BFG, a real joke and pun, this gun is a complete mammoth killing machine. It was first featured as a weapon in Quake and Doom computer games but later made its debut in 2005 screens around the world on Dwayne Johnson’s version of Doom. Even though its critics largely panned the film, a fair few cool action-packed scenes are featuring this faster movie gun. It is labeled as a bio force gun in the movie and fires out bright blue projectiles that explode on impact, spraying victims with caustic chemicals. It’s an item that can cause some serious mayhem. 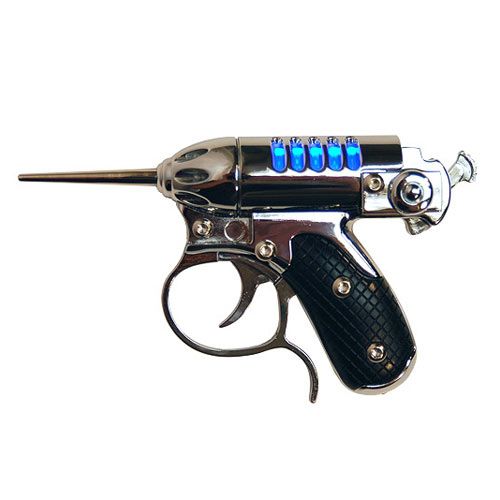 4. The noisy cricket as seen in MIB

Will Smith is an absolute cool dude, but when he is presented with a gun that looks like it couldn’t take a fly out, it makes for a funny scene. He probably thought he was going to get a cannon of sorts, but the noisy cricket looks super unpowerful at its core. Much to Smith’s character’s surprise, he’s able to unleash full combat with this weapon. The force sends him flying through the air and right into a car windshield. This weapon is not to be messed with and is so very powerful for something so puny in appearance. Who knew at first that it could put a 5ft hole in a huge truck!

5. Sharks with laser beams attached as featured in Austin Powers

This one, although never actually featuring in this film, is just too good not to include! The character of Dr. Evil had dreams of taking over the world, but he also equally wanted to have sharks with laser beams attached to their heads. Unfortunately for him, the secondary never came true. It’s a shame because it would have been a completely awesome gun to have. At least he got to have ill-tempered, mutated sea bass.

6. The railgun as featured in the film Eraser

It is quite a luxury to have this weapon if you can get a hold of it. Of course, it’s only in the movie and doesn’t exist in real life, but imagine if it did. This deadly weapon is designed within the film as a sniper rifle. It has a scope that allows its user to see through buildings and any concrete. It’s a brilliant weapon because it is able to blast through walls and have the recipient wholly obliterated on the other side. Insane scenes in this film confirm that Arnold Schwarzenegger can even use this weapon to blow holes in an enormous minivan. One of the coolest scenes and coolest guns in any movie.

This incredibly well-acted film features Nicolas Cage, who works as an FBI chemist. You can see the highly talented Sean Connery, who is in cahoots. He tries to take Alcatraz back from some nasty people and disarm some rockets before they can cause havoc. The rocket gun carries many green balls, which, although tiny, contain deadly nerve agents. Moreover, the start of this film, one can see the damage that these balls can unleash as an unfortunate scientist accidentally drops one and entirely becomes obliterated. Any deranged lunatic person wanting to cause complete chaos would love to get their hands on this cool weapon. Fortunately, this action movie gun is not available in the real world. Thank goodness for that!

Robert Downey Jr plays the brilliant Tony Stark, a playboy, genius, proposed and billionaire who loved to make things explode, while making a load of money in the process. Starks organization in this film specialized in making deadly weapons and bringing the most harmful of all things into the world. One of their most prized possessions was their Jericho missile gun, shooting a missile into the atmosphere, causing it, and then break down into a subset of tiny weapons. These can decimate almost anything that comes across in their path. A lot of people say that the producers of this film showcased the damage that this weapon could do with the gun movie fx. No one would ever have to fire this weapon twice, given the damage it can do. 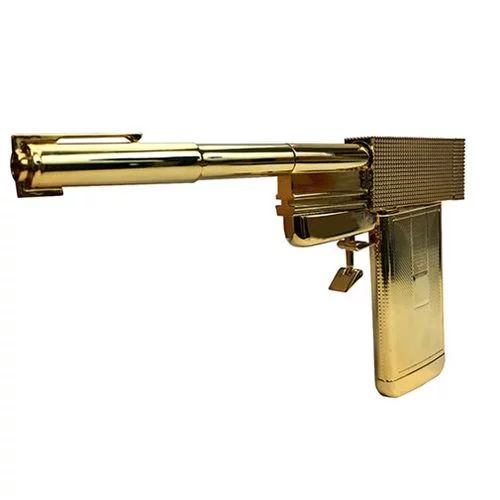 9. The golden gun in James Bond

James Bond always came across a multitude of different enemies and a lot of them carried incredible firearms. In his career, he faced two different kinds of venom and with golden guns. Our favourite is the gold plated cold model which was carried by a character in the film Goldfinger. But also, who can forget the most famous, 4.2 mm handgun which was held by Francisco in the 1974 Christopher Lee adaptation. This incredible weapon could also conceal as a cufflink, pen, lighter and even cigarette case. Any SSN travelling around the world would love to have this and remain undetected. Only holding a single fire, it was challenging to use and sheer perfection. Moreover, the pistol is gold – do we need to say more?

10. The say hello to my little friend weapon in Scarface

It is probably one of the most iconic weapons in movie history. In the 1980s, the Colt AR15 was a lot less ubiquitous than what it is like today. Seeing Al Pacino carry it around in the 1983 hit film Scarface and seeing him take it around with a grenade launcher attached undoubtedly made an impact. The brilliant line that has been adopted by gun lovers ever since made this weapon an icon and one to include in any movie gun database. Anyone saying the “little friend” line thinks to themselves, “this is my rifle; this is my gun movie.” Tony was able to gun down several assassins, and for this completely deranged juggernaut, it proved to be a seriously powerful weapon. However, even though no criminal has ever used the grenade launcher, this movie seems to define the black weapon as a go-to for gangsters and drug lords. Who knows if people would have luck shooting people and propelling them with grenades in the process?

So many movie gun scenes – so many cool guns!

We hope to have delighted you with all the outstanding movie gun props discussed in our top 10 list. Unfortunately, or fortunately, if we’re talking about preventing the demise of humanity, a lot of these guys don’t exist. However, there are many replica movie gun fanatics out there that can undoubtedly employ their movie gun services and hook you up with a prototype. Let’s hope that any movie about gun dealers in the future will showcase even bigger and worse weapons!

What’s your best gun movie? Are there any weapons we’ve left out of our top 10 movie gun list? Tell us in the comments section below.

Lucas Cappel is a buzzing copywriter who simply loves movies. He started as a runner at a production company before going on to work as a camera assistant for twelve years. Now in his retirement, Lucas loves writing articles about movies and related themes for various publications.