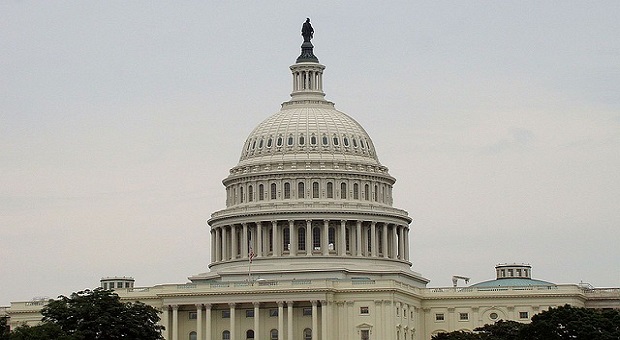 Washington is running scared. Politicians and bureaucrats on both sides of the aisle are in near panic mode, wondering what the future may have in store for them. They are fighting tooth and nail to keep their power. Such a bi-partisan display of cooperation is something that we’ve rarely seen.

What is causing all this cooperation? In a word, Donald Trump. The populist Republican candidate, who is coming in from outside the system, could be the stealth missile that destroys their way of life, and they won’t have it.

Trump has run on as non-political a platform as he can. He’s broken all the rules of a presidential bid, making up his own rules as he goes. In doing this, he’s sent a strong message to the corridors of power, and that message has gotten through.

A lot of Trump’s popularity comes from his anti-establishment stance. The people of America, especially the “silent majority” are fed up.

More than anything, they’re fed up with people who think they are our political masters, rather than being true public servants.

As we draw closer to November 8th, Trump seems to be gaining more and more steam. No longer can the mainstream media dismiss him as insignificant. Even their own polls, rigged as they are, showed Trump as leading over their golden girl, Hillary. They are having to face the fact that Trump might actually win.

But what would that mean for the country? Could Trump, someone from totally outside the system, who has never held a political office in his life, actually be an effective president?

That’s a question that we’re going to have to wait to answer. But there are some things we can surmise about the man who was made famous by the line, “You’re fired!”

When the Government Is the Business

I remember when Ross Perot ran for president in 1992. There was a lot of speculation back then about how well a businessman could do as president, just as there is today about Trump. The same arguments against him were trotted out, talking about his lack of experience and his lack of political savvy.

But those arguments aren’t necessarily valid. First of all, the original intent of the Founding Fathers was for citizen legislators, not a full-time ruling class. They envisioned farmers and tradesmen setting aside their work for a season, so that they could attend the Congressional session. That’s the whole reason that a Congressional season exists in the first place. When the season ends, they are supposed to go back and run their businesses. But today’s legislators have turned politics into their business.

Secondly, where did the idea ever come from that a government can’t be run like a business? Granted, there is no way a government is going to actually show a profit, and it really shouldn’t. Any surplus in government funds merely demonstrates that taxes are too high; and a surplus for government is the only profit there is.

Thirdly, the idea that business doesn’t prepare one for government is pure fiction. Politics, once the election is over, is supposedly all about negotiations, but so is business. Shoot, Trump wrote a book about it, “The Art of the Deal.” It seems to me that he knows a whole lot more about negotiating with people, than the man who is in the Oval Office today.

Then there’s the idea of “acting presidential,” a vague construct that means different things to different people. Well, I can’t say that the occupant of 1600 Pennsylvania Ave NW in Washington acts real presidential. When you compare him to Vladimir Putin, our country’s greatest rival for world leadership, he comes up a very distant second.

If Trump manages to win, I imagine he’ll continue like he has on the campaign trail, so we’ll know what the man is thinking… all the time. So will our friends and enemies around the world, which should give some hope and others pause.

“You, Bureaucrats, Are Fired!”

In my opinion, one of the biggest things that will mark a Trump presidency will be the elimination of government agencies that do nothing but take taxpayer money and waste it. Some of these agencies, which were supposedly created to serve the people, have become out-and-out enemies of the people and need to be shut down. The man who became famous saying, “You’re fired” will probably continue firing people, right and left, trimming government waste and returning power to the states.

He’s already mentioned two departments of the government that he’s planning on trimming extensively are the Department of Education and the Environmental Protection Agency. While liberal fear mongers are trying to say that he’s planning on eliminating them all together, that’s actually not what he said. The goal, as I see it, is to rein in their power, returning much of it to the states, and stopping over-regulation.

But I seriously doubt that those are the only two government agencies that Trump will take a pair of trimming shears to. Government agencies tend to grow, because that’s how the bureaucrats who run them get more power and prestige. So we’ll probably see a lot of trimming, especially in the agencies which curtail economic growth the most.

I have no doubt that a Trump presidency will see many government workers looking for honest work and many empty offices in Washington. But I also expect there will be a lot of opposition to his initiatives, in case he wins the elections. He won’t just be fighting political opposition on this one, but he’ll be fighting some of the biggest, most powerful bureaucracies around. I seriously doubt that any of them will go down without a fight.

But that’s not the biggest thing that’s got Washington scared. Granted, cutting government agencies scares the bureaucrats who populate those agencies, but it doesn’t really affect politicians all that much. They’re afraid of what Trump will do to them.

Why the Trump Movement Isn’t Just About Trump

You see, the Trump movement isn’t just about Trump. It’s about American citizens who are fed up with a political ruling class. Part of the reason this country was founded was to get away from just that. Yet here we are, 240 years later, and we’ve got our own system of dukes and earls.

Politics is a seductive life. There are people who want power, who want control and who want recognition for having it. More than anything, they want the attention that being “someone important” gets them. So, while the pay of being in Congress is good, the perks are much better. Many fight to stay in office, bowing and scraping to those who supply their campaign funds, just so that they can continue being one of the elite.

But as the political elite, they lose touch with the people they have sworn to serve. Truly, the only ones they serve are themselves and those who fund their campaigns. In doing so, the needs of the American people get lost in the clutter.

Trump is challenging that system. He is still largely funding is campaign out of his own pocket. While he is constantly working to raise funds, he is matching many of the funds given to him. I keep seeing ads, over and over again, popping up in my Facebook feed, which say that The Donald will match my giving, dollar for dollar, out of his own deep pockets.

That alone stands to change the Washington landscape. He doesn’t owe the corporations what other politicians owe their sponsors, so he doesn’t have to do what they say. There won’t be any of the Clinton “pay to play” on Trump’s watch.

So, if nothing else, a Trump presidency will be much different than what we’ve seen before. I can’t say right now if it will be good or bad, but it will be interesting.

The last time we had a president who wasn’t a career politician was Ronald Reagan, and he did great. So I guess there’s hope for Trump too. And in the end, can you imagine what would a Hillary presidency look like?