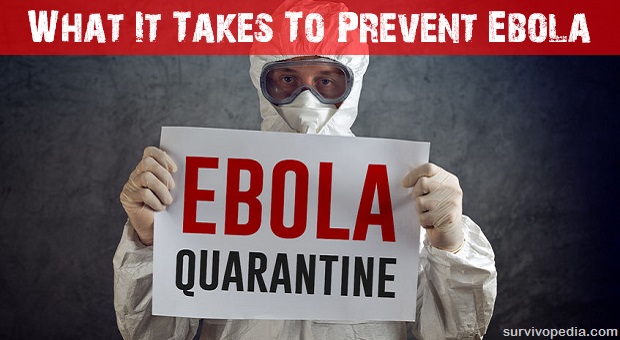 What It Takes To Prevent Ebola

If you’ve been following the news on Ebola, you’ve likely heard precisely what the CDC (Center for Disease Control and Prevention) wants you to hear. I won’t focus on the story that you already know and can read on any of hundreds of websites.

If you’re reading this, you likely feel the same way I do … that you need to hear the whole message before you decide the best course of action for you and yours.

The CDC has been prepared for this for a long, long time, so you won’t hear certain vocabulary used to describe the latest outbreak epidemic of Ebola (Ebola Hemorrhagic Fever Zaire) very often, if at all. At least not until after a tipping point has been reached.

The CDC has known Ebola was coming to the US for more than six weeks, so they have had plenty of time to carefully consider what information to feed you. The CDC has carefully trained PIOs (public information officers.)

A significant portion of their job is to prepare statements for all conceivable contingencies … including this one, and they’ve known it a mathematical inevitability for more than six weeks now and a probability weeks before that.

We’re being told not to worry because Ebola can only be spread through contact with bodily fluids. We are being told this version of the story to prevent panic … which public health and emergency officials predictably point out spreads faster than viruses and is more dangerous.

In reality, while panic is not desirable and certainly less effective than deliberate preparation, even full-blown panic is not going to be more dangerous for you if you get infected.

Even in the oversimplified model of the Ebola transmission spoon-fed to you by the media important details are intentionally left out. Ebola can be transmitted through bodily fluids … even sweat. You can’t see Ebola. You may not even be able to see the bodily secretion it was transmitted by. Contrary to the spin, Ebola can’t be caught in an interview.

If risk of transmission is so low, why are so many healthcare workers infected? First, ethnocentric types brush it off because most of them are infected in “third world countries.” This is ridiculous. American and European physicians with excellent knowledge of procedures designed to avoid transmission have been infected. Now, healthcare workers have been infected both in Europe and in the US too.

Preventing transmission isn’t as easy as the talking heads are brainwashing you to believe. Do you really think you have better knowledge and procedure than American doctors and other healthcare professionals who know what they are dealing with before they are exposed? Hose apples if you do.

It’s not as easy as it sounds, especially removal of contaminated PPE (personal protective equipment). But on a tyvek suit, mask, gloves, etc, spray some food colored water on it and try to remove it without any touching you or getting on your hands.

Even in it’s present form, Ebola can be spread by sweat, vomit, urine, fecal matter, blood, saliva, semen, breast milk … bodily secretions. It can live in them for hours, sometimes longer. The average person touches their face 16 times an hour or more. It can enter your body even through a small sore.

A cough, a sneeze or even simply breathing the same air as a contagious patient, in close enough proximity, could be enough to infect you. Once Ebola mutates, it will largely rage out of control it burns itself out.

When Ebola will mutate to an airborne contagion boils down to math. Viruses don’t have cells or DNA (Deoxyribonucleic acid). They take over cells and modify the cell’s nucleus to turn it from whatever it was into a virus factory.

Then the cell will crank out viruses until it burns itself out and dies, but not before it replicates hundreds or thousands of times and transmits itself to other cells and organisms. Every time the virus replicates, there is a chance of mutation.

Mulitply the number of replications by the number of infected cells in a human, by the 6,000 and counting patients with no end in sight, and mutation becomes probable and eventually certain. It may have already happened hundreds or thousands of times without taking hold and successfully transmitting to other people, eclipsing the original strain.

Add to that the eventual probability that terrorist organizations and possibly some nation states will capture the virus and attempt to weaponize it and smuggle it through our open Southern border. Then add the fact that even if this outbreak of Ebola fails to mutate this time, it’s simply a question of time until some other nasty bug makes the jump at some time in the future.

What Will It Take To Prevent Ebola?

Although you won’t find anything on the subject at the CDC by design, the Department of Health and Human Services has issued quarantine guidelines in the past so I’ll include a link to what they have to say about quarantines since they have proven effective against past pandemics capable of airborne transmission.

Just realize that this information is for hospitals, not for homes. It will likely say that right in the text. Focus on why things are done and adapt them to your situation.

Write your own SOPs that work for you and yours. Fortunately you don’t need to completely reinvent the wheel, but you will need to handle things differently than CDC has been up to this point.

If you go this far, Ebola may likely have gone airborne. Hospitals will implement additional safety precautions. Patients will no longer report to hospitals, but to triage centers, to preserve the hospitals and protect them from Ebola.

If you become infected, all healthcare professionals will be able to do is keep you hydrated, keep you clean, keep you from infecting others and ease your pain until they run out of pain killers. Travel restrictions will be put in place. Martial law may be declared.

Train you and yours in your SOP and the information you’ve assembled. Implement the SOP you’ve created.

Unfortunately we have exhausted the supply of experimental drugs and it is unlikely more will be able to be produced in time to have any significant effect.

I haven’t bought anything since I was first informed of the inevitability of Ebola in the US over a month ago, because you need pretty much same gear to quarantine against most pathogens and I already have enough.

You’ll want everything you’ll need to quarantine at least two rooms for several months. Even though the virus we’re dealing with runs it’s course in less than 30 days, the pandemic will last for months at minimum because it will be jumping from person to person.

It’s up to you to keep you and yours safe. Realize what is happening for what is. Understand why healthcare professionals aren’t telling you the whole story. They are taught that it’s the right thing. And the tiny minority that has found the courage to speak up at this point, have surely sacrificed their careers to do so, regardless of the outcome of the outbreak.

Ebola may or may not go airborne, but if it does, a pandemic will ensue and it won’t matter what you used to prepare for, only whether or not you were prepared for this contingency.

The fact is, we have finite needs and it takes about the same stuff to prepare for any one threat as any other.