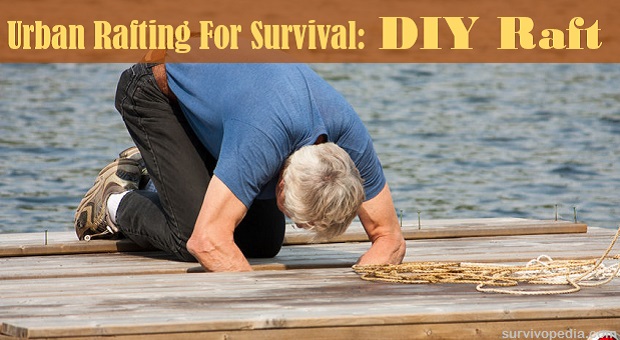 Let’s start with the usual idea that we’re either preparing for a potential situation (which is what we’re all about here, right?) or you find yourself in the middle of a situation that needs to be addressed as surviving through it.

Pick any terrible event you can imagine where you feel it’s time to head to other places. And think about one alternate way to escape from the city, if any river is close by: rafting for survival.

When There Is No Road to Go

Let’s paint the usual bleak picture. The world economy has crashed or terrorists have knocked down the grid, the Ebola pandemic is totally out of control and Dallas, Pittsburg and Coopersville are under quarantine. Or the current administration has decided to remain in power through martial law.

Think about a grid down scenario. Use the expressway? Forget about it, it’s total gridlock, hundreds of fender benders where hapless people are waiting for the cops to show up to settle the insurance claim information… who will never show up.

Hundreds of unprepared people have sat in the gridlock with their vehicles running and are now out of gas. (If you ever find yourself in a gridlock situation, SHUT OFF your engine unless the traffic actually begins to move. Never mind the weather and your comfort. If it’s hot, roll down the windows. If it’s cold, then put on your jacket or get out your emergency blanket from the trunk.)

These cars will now sit here for months, since there’s no power to operate gas pumps to replace your fuel, nor for the good Samaritans who could bring you some.

The same effect will be happening on streets and roads, particularly where ever there is a natural bottleneck like bridges or underpasses or rivers where the traffic can not get past without the lanes being clear or passable between stalled or wrecked vehicles.

Now, you and your family are down to the most basic of transportation….your feet. You all have your backpacks stuffed with everything you think you may need. You should have made a list of what you really needed and had that packed in these bug out bags months ago.

You must remain on high alert at all times during your survival trek….there are hoards of desperate people just like you out there…but they will very likely not be nearly as nice as you are.

How to Build Your Own Raft

Among the many other alternate paths to get outta Dodge, like railway lines, power transmission line rights of way, gas pipeline rights of way, for instance, there is also the river, if close by. No boat? Ah! That’s what are we talking about: you could make a raft from typical suburban found materials.

In the back alleys of every shopping center or big box store in the country, you will find the basic building blocks for many urban survival scenarios, your friendly neighborhood cargo pallet. Other useful materials may be found in their dumpsters as well.

You will find cargo pallets useful for building shelters, getting you up off the ground, for firewood, and loads of projects where you need a few boards. They are “alternative material construction” which people have used even for building houses using pallets.

About four of these would start a nice, fairly stable raft for two adults and a couple kids, or another pair for every extra couple people. Now to make these things actually float and support more than their own weight, you’ll need something of high flotation effect, like empty plastic barrels with the plugs or bungs as they’re called, still installed or a very large find of Styrofoam blocks. 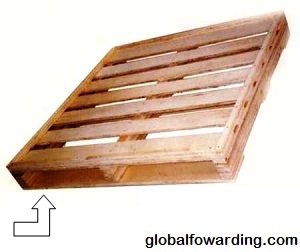 Starting with the most ideal flotation device, the barrels, lets get some construction ideas going.

For most plastic barrels to fit properly underneath a pallet, you will need to remove the bottom boards (as indicated by the arrow in the picture at the right) so that the pallet will tend to grip the barrels with the remaining upright spacers that connected the top and bottom levels of the pallet.

After you have removed the bottom boards, which could be used for paddles once you get the nails and sharp splinters out of the way, the pallets are placed so that the barrels are saddled by the pallets. See the picture below for illustration. 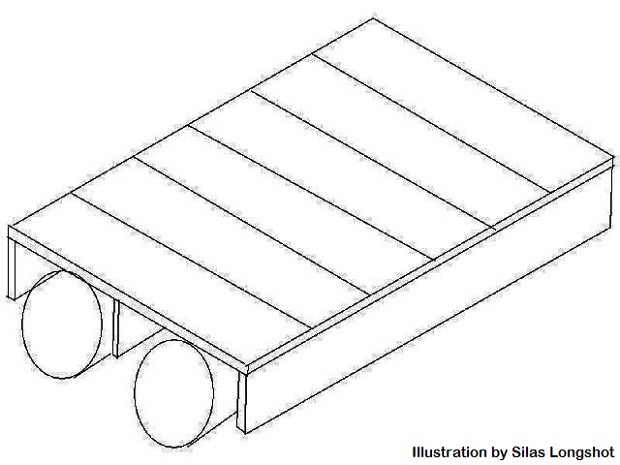 You will have to lash or bind the barrels to each pallet and each pallet to the other until you have a roughly square construction like so, with a barrel or two under each pallet. See the picture below for illustration. (These sketches are not to scale by any means, just a display of the concept.) 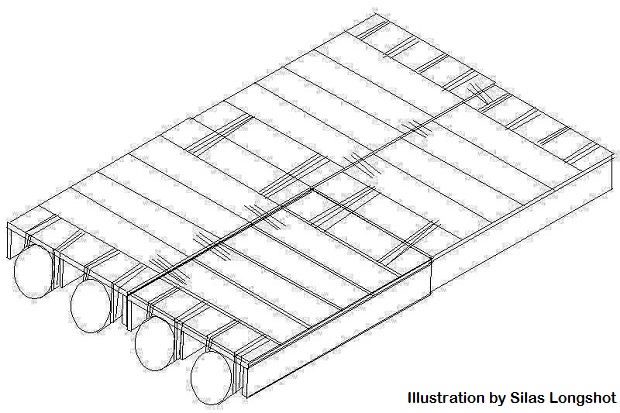 Since you may not be so lucky as to find the needed amount of barrels, you could tear apart sufficient numbers of pallets to fill underneath the ones intended to be the raft, with the amount of wood to get pretty good floatation. This would have to also be lashed in place, like the barrels, as shown here: 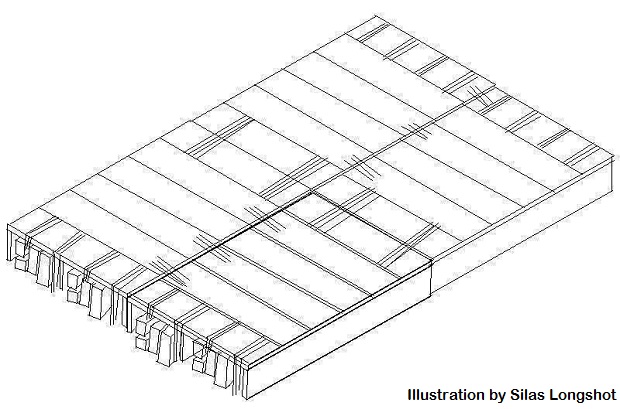 If you’re lucky enough to find Styrofoam blocks of sufficient size to substitute for the barrels, the raft will be considerably lighter. If you find a massive pile of Styrofoam peanuts and heavy duty trash bags that you can empty out, you can bag up the foam equally into the bags assuming they’re large and tough enough and of roughly equal size.

The bags full of peanuts will be a really good thermal barrier between yourself and the raft….bean bag chairs / beds, if you will. They would also come in handy for sleeping on at overnight stops on shore as you slowly float along as the peanuts are a great thermal barrier. And the peanut bags may prove useful as flotation devices if the raft suddenly sank or got capsized, by accident.

And of course, if you happen to find sufficient dry logs to lash together down near the river, you can make the classic Huck Finn log river raft.

This article has been written for Survivopedia by Silas Longhshot, from Surviving Urban Crisis.

Silas Longshot has nearly ten years in the security industry, eight years with a major airline, and ten years as an ASE master technician. He has been a camper / backpacker since 1970. A lifetime of mechanical and tinkering skills and eight years in the R & D product lab of a major company with worldwide sales and connections. Experienced in engineering drafting, prototype development, product testing, professional photography and technical instruction writing. Scenario counter planning is a strong skill in all background areas. A competition shooter in the Cowboy Action Shooting arena, thus the alias Silas Longshot. "Surviving Urban Crisis" is his first effort at communicating to others the needed skills to cope with today's environment of bad government, terrorist activities and potential pandemics.