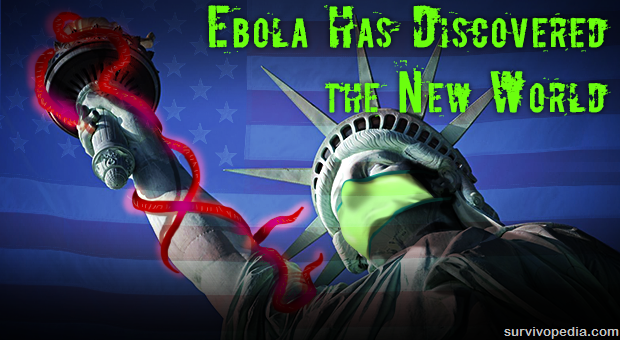 Ebola Has Discovered The New World

It was bound to happen, and it has; like Columbus, Ebola has made it across the Atlantic Ocean and discovered the New World. Of course, Ebola had the advantage of air travel, something that Columbus could only have dreamt about in his time.

Thomas Eric Duncan, the first Ebola victim to come to the United States, came here from Liberia, Africa, with plans to marry his long-lost sweetheart and be reunited with his son.

Whether he knew it or not, when he got on the plane in Liberia, he was already infected with the Ebola virus. He apparently contracted it carrying a sick pregnant women to and from a hospital. Supposedly, he didn’t know that what she was sick with was Ebola.

This whole story has been a disaster; one that shows us how woefully unprepared we are for this killer virus to arrive on our shores. When Duncan first went to the hospital, complaining about flu-like symptoms, they gave him some antibiotics and sent him home. That was after he told them that he had come from Liberia.

Why? Because they still aren’t thinking that Ebola can come to the United States. It’s a problem over there in Africa, not here at home. That’s dangerous thinking (or maybe lack of thinking).

On his second visit to the hospital, he was admitted and put into quarantine. Several days later, his family came out publically, saying that nobody from CDC (Centers for Disease Control and Prevention) or the hospital had contacted them yet to tell them what to do. Hello! Will somebody wake up over there!

I’ve got to say; with this type of action going on, my confidence in our government to protect us from Ebola has dropped from low to non-existent; maybe even lower than that. I don’t care how many times the liar in chief commander in chief makes a speech saying that there’s nothing to worry about, I won’t believe him. There’s plenty to worry about; or at least to get ready for.

Besides Obama lying to us, we’ve got the CDC lying to us as well. They’ve said over and over again that Ebola “is not transmitted through the air.” All they are saying is that it is transmitted by “bodily fluids.”

What they aren’t saying though, is that it has been medically proven that it is transmitted by what is known as aerosol. By definition, aerosol, the droplets that go into the air from coughing and sneezing, is bodily fluids, specifically saliva and mucus.

In other words, while they are technically correct in saying that the virus can’t float around in the air, waiting for a victim to come along (that’s what “airborne” means), they aren’t telling us everything we need to know about how it can be caught. Duncan probably caught it via aerosol and then got on an airplane full of people to travel in a confined space for a long international flight.

I don’t know about you, but there’s no way that I’m going to trust the CDC on this one. If there is any chance that someone has even been exposed to Ebola, I’m not going anywhere near them. Nor am I allowing them to come anywhere near me or my family. If they want to talk to me, they can do it long-distance.

Let me get back to Duncan. Besides however many hundred people were on that airplane with him, he was also around people in airports at both ends of his trip. Then there are the people he came to see, as well as the people in the hospital emergency room, as well as casual contacts with people in stores and other public places.

All in all, he could have had contact with several hundred or even a thousand people, any of whom can be infected. So far, government officials are monitoring about 80, checking them for signs of Ebola.

Considering that I live in Texas, that doesn’t make me feel all that comfortable. It’s certain that he had at least some sort of contact with several hundred people after becoming infected, but they’re only monitoring 80.

While those 80 might be the ones whom he had the most contact with, that doesn’t mean that he didn’t have enough contact with others to infect them. Since we don’t know, we should be playing it safe, not just monitoring those 80 people.

The United States could very well end up being the seventh country joining the Ebola pandemic. In that, we’d be joining Spain as one of the two countries outside of Africa where the disease has spread. I’ll have to say, that’s not a distinction that I think any of us want.

With all this bad news, I hate to get into what follows; but I believe it is of essential importance. During this last week, after Duncan’s case was announced in the media, ISIS (Islamic State of Iraq and Syria) stated that they are planning on infecting some of their people with Ebola and sending them to the United States as walking bio-bombs.

These people will be able to pass through airport checkpoints, just as Duncan did, because they won’t be symptomatic. But once they get to the U.S. they will become symptomatic and infect as many people as they can, before they are captured and quarantined.

I’ve already taken action to protect my family from Ebola. I’ve ordered protective equipment and am preparing my home in case we need to shut ourselves in. If the disease gets out of control here, that’s the only way I can make sure that my family will be safe, other than bugging out to a remote location in the wilderness.

What about you; what are you doing?