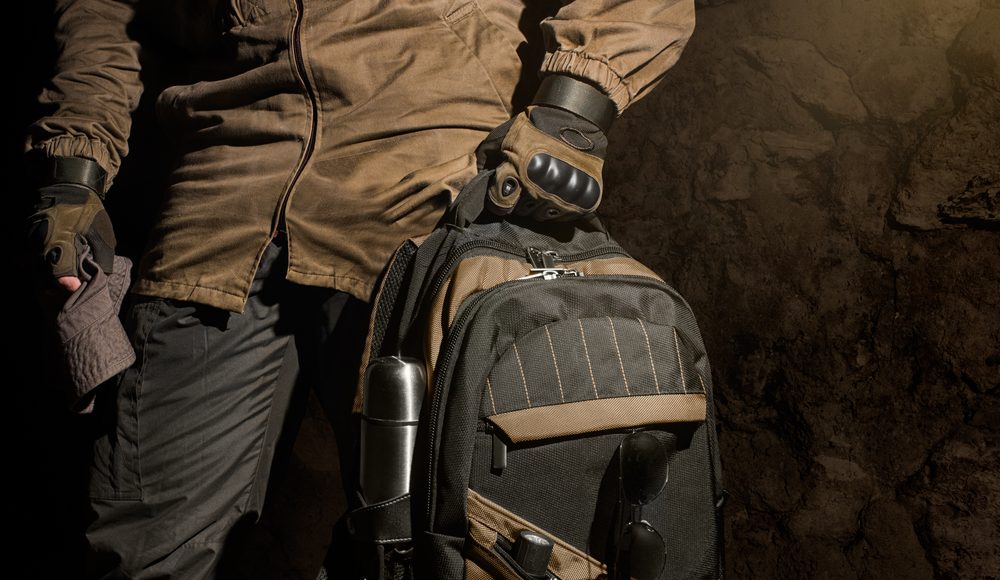 Survival gear is often carried in layers. The first is what you carry on your body.

This is the critical equipment that you want to be able to access anywhere you go, such as your defense weapon, a pocketknife, a lighter or another fire starter, and such. You’re limited, of course, to what will fit in your pockets or on your belt.

The next layer is an off-body kit that you can carry in a bag or pack. The idea is to put together a collection of curated gear that could prove useful in a wide range of situations, well beyond pure wilderness survival. However, it can be time-consuming, as well as frustrating, to pack, unpack, and repack these items all the time. For example, Monday through Wednesday, you use your messenger bag for carrying things to and from work. Then, you’re heading out of town for a long weekend and you’ll be using a day pack. But you’re planning to do some hiking during that trip and you have a different bag you’ll be using for that.

Rather than constantly finding new ways to pack your EDC gear, we’re going to put it all together in a neat, compact kit that can be easily swapped around to whatever pack or bag you’re using.

What we’ll do is take a walk through the kit I’ve assembled. I’ll explain the reasoning behind the items I’ve chosen as well as talk about some other potential options.

One of the most common uses for this kit will be to make quick repairs. There are all sorts of options on the market that could fit into this category. A good multi-tool, such as the SOG PowerLock, is one way to go. But, many of these tools are heavy and bulky. Plus, the needle-nosed pliers aren’t the best when it comes to loosening nuts and bolts.

For my kit, I purchased a small pair of channel lock pliers. Between the pliers and a Victorinox RangerGrip, which is like a Swiss Army knife on steroids, I can handle a lot of repair jobs. Together, they weigh six ounces, compared to the 9.3 ounces for the SOG multi-tool.

I added a BitVault to the kit to handle any screwdriver jobs. What I like about this tool is it will accept any ¼ inch bit and store them right inside itself. Plus, it has a 90° position for the bit as well as out the top.

The ripSPOOL from Exotac gives me over four feet of duct tape, 60 feet of braided line, and a #16 sail needle, all in a compact package.

It is probably overkill, but I also added a fixed blade knife to the kit. The Fastpak from Rainier Knives is one of my all-time favorite small knives and it fits well in this kit.

While an argument could be made that flashlights and similar items are tools, I feel they are important enough to rate their own category. Stumbling around in the dark is asking for trouble. Many people carry a small flashlight in their pocket but having a spare in this kit just makes sense.

The Streamlight ProTac 1AAA has served me well for a few years now. Other options in this category include any number of pocket flashlights, including those made by Streamlight, Fenix, and Olight.

Being able to make fire is a primary survival objective. To that end, it is another area where redundancy is important. There are many options on the market, but I’m sticking with the tried and true. I have a disposable lighter stored in an Exotac fire SLEEVE. This protects it from water as well as accidental discharging of fuel.

I also have a ferrocerium rod, this one being the fireROD from Exotac. It has the bonus of storing a bit of tinder in the handle. With that in mind, it takes more than just a spark or lighter to make fire. You need a tinder as well. I’ve added a couple of Fastfire cubes from Solkoa. They are some of the best fire starters I’ve ever used.

This being the 21st century, most of us could make use of a spare battery bank to charge our cell phone if it runs low. To that end, I’ve added a small one made by Onn. The battery isn’t much good without the cord, of course. I’ve added two, the one that came with the battery as well as a secondary one that’s about four feet long. Many places these days, such as airports, have USB outlets one can use to charge their devices. Doing so with a six-inch cord can be aggravating.

Another electronics item that is handy to have is a flash drive. Mine contains password-protected files with scans of important documents, with plenty of room leftover for anything I need to download during my travels.

It is always a good idea to have a way to write down information and leave notes. The small notebook from Rite in the Rain works well. A pencil will work no matter how cold it is, and I can sharpen it with a knife as needed.

I’ve also put into the kit a small red permanent marker. This could come in handy for marking a map or leaving messages.

There are some things that every survival kit should have inside. A button compass isn’t the best form of this navigation tool, but it fits well in the kit. I’d never use this for any sort of precision work but if all I need to know is which way is generally north, I’m good to go.

Water purification tablets are a wise addition, especially if you’ll be doing any traveling.

An emergency blanket is a good thing to have and not just for huddling under during a snowstorm when you’re stranded on the road. It can be used if someone is suffering from shock, as well as an impromptu cover in a rainstorm. That said, once you’ve unfolded it, you’re not likely to ever get it back to the same small size again.

I’ve included a signal mirror for a couple of reasons. It works very well for its designed purpose, getting the attention of someone who can help rescue you from a misadventure. It can also be used to see around corners or underneath objects, should the need arise.

A bandanna is a great multi-use item. It can be a pre-filter when dealing with questionable water. It can be used to wipe things down or clean them. You could use it as a small bindle, like hobos used to tie to sticks. Tie it as a headband to keep sweat out of your eyes. It has many uses for such a small item.

It is never a bad idea to include a bit of cash in a kit like this. You never know when you’ll be in a bind and not be near an ATM. I keep the cash stashed where it won’t be easily seen when the kit is opened in front of other people.

Last, but not least, a spoon is kept in the kit. Why? It doesn’t add much weight and if I am in a situation where there is food but no utensil, I’m good to go. Sounds silly, I know, but I promise you if you’d ever been in that situation before, you’d realize how handy it would be to keep a spoon with your gear.

For this kit, I’m using the Emergency Ready Pouch from 5.11 Tactical. It has several inner pockets, making it easy to organize the gear. It is small enough to fit easily in just about every pack and bag I use on a regular basis. It also has a shoulder strap I can use, should I decide to carry just the kit for some reason.

I’ve made numerous kits like this over the years, using everything from purpose-built bags and pouches from Maxpedition, Vanquest, and 5.11 to repurposed camera bags and even old fanny packs. Both of the latter can be found for a buck or two at just about any thrift shop in the country.

What I recommend is that you gather your gear first, then shop around for a container that will hold all of it. This way, you won’t end up with something too small to hold everything or something way too big for your needs.

Even the casual reader will likely notice that I’ve not included any first aid items in this EDC kit. I keep those items separate from kits like this for a couple of reasons.

The biggest reason is that while I’d have few qualms with handing someone my first aid kit if they needed something, I’d not want them digging through my EDC kit to find a bandage. In a crisis, I might be in a situation where someone can make use of the medical supplies while I’m doing something else.

Many people, including myself, recommend you carry a tourniquet as part of your routine EDC loadout. However, a tourniquet should be carried in a way that is immediately accessible, such as in a belt pouch or in a pocket. The last thing you want is to have to dig through your pack to find your EDC pouch and have to dump that out to get to your tourniquet.

All of that said, your EDC kit should reflect your own needs. Load it however works best for you.

Jim Cobb is a nationally recognized authority on disaster readiness. He has written several books on the subject. One of his newest projects is Backwoods Survival Guide: Practical Advice for the Simple Life, a collection of articles written by himself and a few other subject matter experts. You can learn more about him at survivalweekly.com.