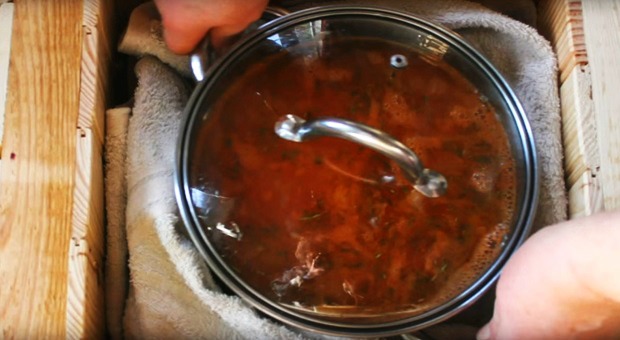 Surviving Off-Grid: 4 Recipes To Cook In A Haybox

I have to admit, this was a new one for me, and I thought that I’d tried every method of outdoor cooking invented since cavemen sporked frogs and roasted them over an open fire.

As it turns out, haybox cooking is a combination of two of my favorite cooking vessels – a Dutch oven and a slow cooker.

This method came about during WWII when cooking oil was rationed for the war effort. The air spaces in the hay trap the heat, as will anything similar, such as shredded newspaper or corn husks. You want the hay to be fine, though, so that you can pack it tightly. You don’t want stems and brambles.

The basic premise is that you heat the food in its own juices, or water, and then once you bring it to a boil, you put it in the haybox, which insulates it, and let it finish cooking all on its own. Of course, this is a method that requires food that is in a broth, but that’s about the only limitation that I can think of.

You can use it for roasting, boiling, simmering, or steaming; as long as there’s liquid to hold the heat.

This would serve you well if you were traveling and couldn’t cook along the way, or if you don’t want to use a ton of fuel by cooking it over heat all day. For that matter, it’s great just to help you save on your electric bill! All in all, it’s an extremely efficient way of cooking.

Learn the secrets that helped our grandparents survive the Great Depression!

What Is a Haybox Cooker and How to Build One 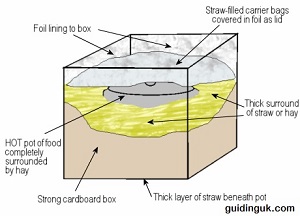 A haybox cooker is exactly what it sounds like – it’s a box full of hay that you cook in.

The idea is that the hay is packed around a Dutch oven that has food in it that’s already cooked to boiling. You transfer it from the heat source immediately to the haybox, pack the hay around it, close it up as tightly as you can, and go about your business.

It’s a natural slow cooker, and just like cooking with its electric-dependent sisters, it takes several hours for food to cook. How long exactly, depends on the initial cook time of the dish, how long it’s already cooked, how tightly the hay is packed, and how air-tight the box is.

As you can imagine, it’s hard to give an exact time, but a good haybox will hold usable heat for up to 8 hours.

If you already have a trunk or old military locker/box that’s about 30 inches cubed, then you’re already good to go. If not, build one.

Start by building a sturdy wooden box that’s as airtight as you can get it – try to score some scrap tongue and groove from your local mill or home-improvement store.

Build a box with a sturdy, tight-fitting lid. Line the box with sturdy paper or cardboard to seal any cracks that remain so that the heat can’t escape.

To cook in your box, pack it with about 3/4 of the way full of hay, then form a little nest in the center for your Dutch oven and pack it as tightly as you can get it.

How to Cook With a Haybox Cooker

Bring your food to a boil or simmer, then transfer immediately to the hay box. Pack the top and remaining sides with more hay as tightly as you can pack it and shut the lid. Let it cook, and you’re good to go.

Note: You can even make you haybox in a hole in the ground – how handy is THAT for living in the woods in a survival situation? In that case, you could use dried grass and leaves, or whatever you could find lying around as insulation.

Oh, and did I mention that you can also use the haybox to make frozen treats such as ice cream?

Just make your favorite ice cream recipe and pour it into a coffee can with a lid. Find a bucket that’s 4 inches deeper and 8 inches (total) wider than your can. Put 4 inches of ice and coarse salt in the bottom of the bucket, put the can on top of the ice, and pace more ice and salt around the can. Put it in the haybox and seal it up. You’ll have ice cream in about 4 hours!

This soup is especially filling and comforting. It’s a great meal-in-a-bowl for busy weeknights – just turn it on in the morning and come home to a wonderful-smelling pot of soup.

In a large heavy skillet, cook the ground beef over medium-high heat, just until browned, breaking up with a spatula periodically until meat is crumbly. Drain all but 1 teaspoon or so of oil/drippings and return to heat.

Add the cabbages, onion, carrots, garlic, celery seed, paprika and cumin and cook for 2 minutes, stirring frequently, until it reaches a rolling boil.

Add all to the Dutch oven and add bay leaf and broth. Season with salt and pepper. Bring to a rolling boil for 5 minutes. Transfer to hay box for 8 hours.

Sometimes nothing hits the spot quite like a good chili!

In a heavy skillet, heat olive oil and then brown the steak (in batches if necessary) on all sides for about 4-5 minutes.

Add all of the vegetables to the Dutch oven, pour in the broth and add the seasonings. Stir well to mix. Add the steak, cover and bring to a rolling boil. Transfer to haybox and leave there for 8 hours.

There are few things that say “comfort food” better than a hearty beef stew. Slow cooking means the meat is always succulent and tender and you’re welcomed home with wonderful aromas.

Trim the stew meat of visible fat and cut into bite-sized pieces. Season with salt and pepper.

In a large heavy skillet, heat olive oil over medium high heat and brown the stew meat, in batches if necessary, about 4-5 minutes until browned on all sides.

Add carrots, celery, onions, potatoes, bay leaf and parsley to Dutch oven, then add meat. Pour 2 3/4 cups broth over all. Bring to a rolling boil for 5 minutes, then transfer to haybox for 8 hours.

Delight your loved ones with this classic and delicious frozen treat you can make in a haybox.

Have you tried haybox cooking? If so, please share your experiences with us in the comments section below!