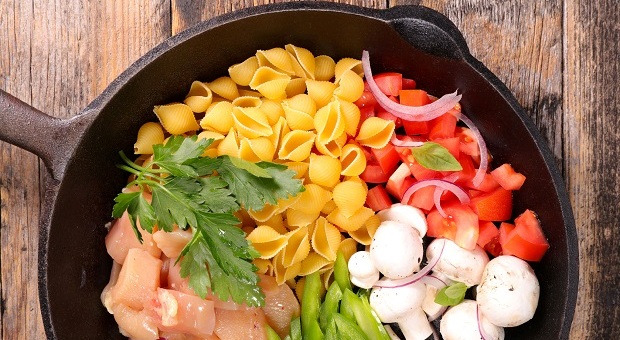 Survival Lessons From The Old: One Pot Meals

For eons, entire meals from stews to casseroles have been made in one pot.

The cowboys and settlers did it because they only had the luxury of one pot on the trail, and we do it today because of the convenience and simply because there are so many recipes out there that are delicious as well as fast.

We follow their example, and learn from their knowledge. Here’s what we should know about this old way of cooking!

As preppers, it’s important that we know how to cook without electricity, and though I’ve included slow cookers in this article, the rest of them don’t require anything other than fire and the vessel.

There are some rules for cooking in a single pot if you want the meal to be delicious and safe to eat, but for the most part, they’re quick and easy to prepare and clean up.

First, you want your vegetables to cook evenly, so if you’re standing over the pot, you may want to throw hard veggies like carrots in 15 minutes or so before you add the rest.

For soft veggies such as cabbage and broccoli, put them in at the last minute since they only take 10 or 15 minutes to cook in a pot. This isn’t a necessity, if you’re throwing something in the crockpot and leaving, so just know that some veggies may be a little mushy if you put them in all at once.

Next, searing your meat adds flavor to the meal. This is especially true of large pieces of meat such as roasts, pork chops, beef tips, and other meats that are thick and solid. You don’t have to do this, but if you do, it will add an extra layer of flavor. Hamburger and Salisbury steak has a crispier texture if you sear it beforehand.

You must make sure that your meat cooks all the way through, especially if it’s poultry. This isn’t such a big deal with red meat as long as you don’t mind it a bit rare in the middle, but birds carry salmonella.

Trust me – one bout of food poisoning from that and you’ll make sure it never happens again! USDA guidelines say that red meat should be cooked to 145 degrees F, ground meats should cook to 160 degrees, and poultry should be 165 degrees.

When you’re finished eating, make sure that you refrigerate it. Bacteria begin to grow quickly between the temperatures of 40 degrees F and 140 degrees F, so too avoid the risk of food poisoning, refrigerate your food within 2 hours (1 hour if the temperature outside is above 90 degrees) after it comes off the heat.

Cold foods, especially ones that contain mayo or eggs, should be kept at 40 degrees, so just put them in a bowl of ice if they’re going to sit out, and stir it frequently to keep the entire dish cold.

Leftovers can be kept in the fridge for 3-4 days as long as their stored in containers, and can be frozen almost indefinitely, but they’ll begin to lose flavor after a month or so depending upon the food.

There are several types of cookers that you can use depending upon the dish and the circumstances. Especially if you’re cooking over a fire, you’ll want to cook as efficiently as you can, and one pot meals are certainly the best way to do that.

Since our primary concern is cooking in a survival situation, we’ll start with those methods.

This is one of my favorite ways to cook outside because you can quite literally cook anything that you want to in them. Whether you want to make stew, chopped steak, or breads, a Dutch oven will do the trick. They steam the food internally, which keeps it moist and tender. You can buy aluminum and cast iron Dutch ovens, though the cast iron, in my opinion, is far superior in nearly every way.

The history of the Dutch oven is believed to date back to Holland in the early 1700s, and was brought to America with the first settlers. They were popular with settlers and other people, such as ranch trail cooks, and were used in work camps during WW1. Paul Revere improved the design by adding a flanged lid and made some other modifications, likely to improve the strength and consistency of the cooking.

They come in different sizes and two primary designs – the bean pot or kitchen oven, best for use indoors or placing on a rack over an open fire, and the camp or outdoor oven, which has a flanged lid that can also serve as a skillet. It also has legs, a flat bottom, and a sturdy wire handle so that you can hang it or lift it from the coals.

They’re great for cooking indoors or out and can be used in the oven, over a campfire, or buried in the coals, depending upon your needs and what you’re cooking. Cooking with a Dutch oven is simple, too, once you get the hang of it.

Cooking with a solar oven is a great alternative when you don’t have (or don’t want to use) electricity. Though you can convert many of your own personal favorites and use them with your solar oven, here’s a recipe written specifically for that cooking method. You will surely love this pot roast cooked on your solar oven.

Ingredients for this tasty recipe are:

Put the roast in a roasting dish and sprinkle with salt, pepper, garlic, and Italian seasoning. Add the veggies around the roast and then pour the bouillon in. Place in your solar oven and bake for 3 hours or until tender.

Stop asking yourself if the solar oven works during winter, because it does, and here’s the proof!

Thank you again, Joseph Lodge for making iron skillets of the highest quality readily available in the US. The original iron skillet dates back to 1707, when Abraham Darby invented a process to make cast iron in large quantities so that they could be produced for common use.

Iron skillets come in a variety of shapes and sizes, often with lids, and are great for cooking one pot meals in smaller quantity. They’re not quite as versatile as the Dutch oven, but certainly have value, especially for cooking quick meals such as breakfast scrambles and meals that don’t require a deep pot or long cooking times, such as Salisbury steaks, cornbread, camp biscuits, and fried chicken.

Ahh, possibly one of the best cooking inventions of modern times. Just as with man, the slow cooker started as something quite a bit different than what it is today. In 1952, West Bend came out with the electric bean pot, which was just a ceramic pot that sat on top of an electric heating element. This wasn’t much different than cooking on a stove, but was perhaps the first commercial attempt at a portable cooking vessel.

Enter Irving Naxon. He had developed the idea of a portable cooker that would have a crock sitting inside a casing that contained a heating element, thus providing even heating. He applied for the patent on May 21, 1936 and received it in January of 1940.

Naxon credited the idea to his Lithuanian grandma, who told him about how she used to cook dish called cholent after hours at a local bakery. She would prepare the meal, then place it in the oven so that the fading heat would slowly cook it overnight. This provided his inspiration for “low and slow” cooking.

He brought his idea, called the beanery, to market in the 50s and in 1970, Rival manufacturing hired Naxon, rebranded his product as the Crock Pot, and put it on shelves across America for $25. Surprisingly enough, that price hasn’t increased by more than a few dollars for a standard version since then.

There are, of course, improved versions with fancier technology and higher capacity that cost more.

Slow cookers are absolutely fabulous for all sorts of meals from stews to ribs that you want to cook slow and low while you’re away from the house or busy doing other things.

As survivalists, we would be remiss to leave out this method of preparing one pot meals.

We’ve discussed in another article how to put these together and, like our other cooking methods, canning is a great way to prepare both meals and desserts. You can also dry-can meals using dry ingredients that only require that you add water.

The one benefit that makes canning stand out is that you can eat the meal right out of the jar. It is, of course, more delicious if you heat it up, but if you’re without power and don’t want to draw attention to yourself with a fire, eating straight out of the jar may be your only option.

Another benefit here is that you can prepare the meals years in advance as opposed to cooking them on the spot. In a survival situation, that’s a huge plus.

The Beauty of One Pot Meals

There are a ton of reasons why a one pot meal is so appealing, but from a survival perspective, the ease of cooking is probably the biggest one.

You can cook a pot roast complete with all the fixings in a Dutch oven and you can even cook such meals as chicken and dumplings. They’re not just for soups and stews.

Having a variety of delicious meals is a huge morale booster as well as a way to get all of your nutrition out of one pot. Though beans and cornbread are delicious and filling, it gets old after a few days and isn’t a well-rounded meal.

A quick internet search will net you a ton of great ideas for one pot meals, but you can always just use your imagination. There are also some recipes that you should know by heart. They aren’t necessarily one pot meals, but they are essentials that will help you keep your crew full and nourished.

One pot meals are, for the most part, only limited by your imagination. They’re easy to throw together, toss into your cooking vessel of choice, and forget about. Also, you’re getting many more nutrients than you would if you only cooked a single item. That makes them a great survival food.

There is a great opportunity for Survivopedia readers to prepare for cooking in the sun, so grab this offer available only for a few days!