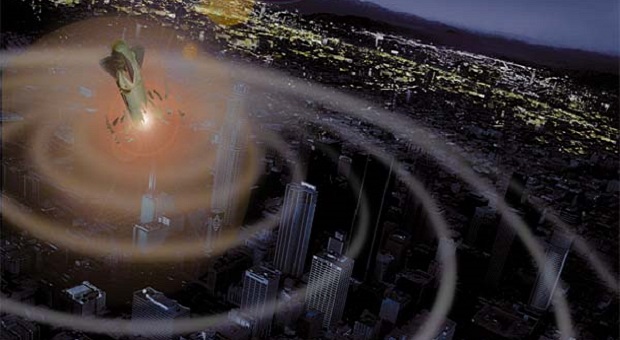 Surviving An EMP Attack: Part One

An electromagnetic pulse (EMP) is a very real threat. Not only have EMPs been weaponized, meaning that a rival military force could use one against the United States, terrorist organizations have also adopted the technology.

If that weren’t enough, scientists acknowledge that a large solar flare could produce a natural EMP powerful enough to disable electronics around the world simultaneously. Although an EMP event may seem more like a science fiction movie, it could very likely be the event that catapults the world into an apocalyptic frenzy.

What is an EMP?

An EMP is typically characterized by short bursts of electromagnetic energy across a range of frequencies. Although not an exact comparison, the range of frequencies experienced during an EMP is most comparable to the difference between very low frequency AM (Amplitude Modulation) radio transmissions and the much higher FM (Frequency Modulation) spectrum.

This means that EMPs are capable of disrupting a large number of devices across a broad spectrum of frequencies. The source of the EMP can be radiological, electrical, or magnetic. EMPs are actually a common occurrence; however, most of them are very weak in nature and do not affect surrounding electronic equipment. For the purposes of this guide EMPs refer to large scale pulse events that have the potential to permanently disable electrical and electronic devices.

Natural EMPs are created by lightning discharges and by solar flares. Lightning is a very powerful natural event but the electromagnetic pulse created is relatively localized. Lights may flicker in the presence of a large lightning discharge but the effects are usually not much more severe than that.

A massive solar flare could produce an EMP so powerful that every electronic device in the world could be disabled instantly. No solar flares have ever been recorded that are even close to the size required to generate an EMP of this magnitude but the possibility is greater than ever based on studies of the sun.

Weaponized EMPs come in three forms. Nuclear, high altitude, and non-nuclear. Whenever a nuclear blast occurs a very powerful EMP is generated. Some nuclear weapons are currently being manufactured for the sole purpose of generating an EMP blast instead of physical damage caused by the explosion.

A high altitude EMP is created when a nuclear device is detonated at a high altitude. These are the most powerful man-made EMPs as the EMP waves are made stronger by interactions with the Earth’s magnetic field. Non-nuclear EMPs are a more recent development and are used more as a localized solution during battle than a large scale weapon.

Although the effects of a man-made EMP are very serious, it is considered a somewhat localized event. A high-altitude EMP blast could knock out the electrical grid in large areas of a country but it is not a global phenomenon. This increases the likelihood that the effects will not be permanent as unaffected areas try to help.

However, the effects of fallout from a high-altitude nuclear detonation have not been studied in great detail. Radiated debris could add another dangerous facet to this already devastating attack.

Consequences of an EMP

Depending on the strength and intensity of an EMP blast, the world could be sent into the dark ages in an instant. A solar flare, for instance, could disable electronics and communications devices around the world indefinitely. Even a more localized event could leave entire states or even countries without power or any other form of technology.

Once the lights go out, the real consequences of an EMP begin. Like any other apocalyptic event, riots and widespread violence will follow. People will begin to realize the gravity of the situation within a few days. At first, many people will shrug off the power outage as a temporary setback akin to a bad storm damaging the local power grid. It won’t take long for society to comprehend the seriousness of the situation at which time things will quickly deteriorate.

Every electronic device you have will be destroyed following an EMP unless you have taken steps to protect them from the pulse. A common method to protect electronics is discussed in Part 3. Even if you protect some things, it is impossible to protect everything; especially large items like vehicles.

All modern vehicles rely on complex electronics to run. Without them the vehicle will not start or run. Any electronic devices you have set aside for survival are going to be inoperable. This includes GPS (Global Positioning System) units, radios, electronic fire starters, and every appliance in your home.

The power grid will not come back on for months if it does at all. There will be no media, no TV, no radio broadcasts. Essentially, there will be no way for you to find out new information about what is going on. The best course of action is to assume the worst and put your survival plan into action. Waiting for something bad to happen usually doesn’t end well.

Just about every manufacturing process currently used relies on electricity meaning that new products cannot be made instantly. Picture a world similar to when electricity was first introduced to general public and massive infrastructure projects began to create the grid as you know it today. A similar phenomenon will occur following an EMP assuming that societal breakdown does not destroy any chance of overcoming the disaster.

People everywhere will begin searching for anything that can help them survive. Since the majority of people have not made preparations for post-apocalyptic survival, they will be frantically searching for answers and solutions for their circumstances. The world will be an exceptionally dangerous place as everyone struggles to survive.

Now that you have an understanding of the many far-reaching consequences possible in the wake of a massive EMP, the next step is learning tactics that allow you to survive in these conditions without the assistance of technology while avoiding the droves of people that are not equipped with this knowledge that have resorted to violence as a means of survival. Parts 2 and 3 discuss tactics you can use to increase your chances of survival during this chaotic time.