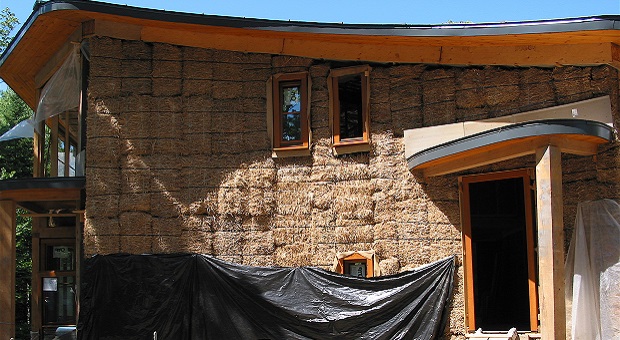 If you hear 2 total strangers talking about straw bale constructions, it may sound to you like a joke, right? I mean, how can you build something that’s enduring and reliable using bales of straw?

You may have a point if you’re talking about a fallout bunker or a zombie-proof ranch in Texas, but in terms of survival, knowing how to build a shelter for you and your family in a crisis situation using readily available materials may come in handy someday. If you think about it, it can actually save your life.

Do you remember the 3 most important things when it comes to survival? Water, food and shelter; and when we’re talking about shelter, straw bale construction comes into play.

Let’s start at the beginning.

What Is a Straw Bale Construction?

To put it simply, this is as green and sustainable as it gets. This construction method uses whole or partial bales of straw as building blocks for a shelter or home’s walls.

Basically, straw bales are acting as bricks for building your shelter. What’s so special about straw, though? The short answer: it’s everywhere; readily available and cheap. The long answer is coming right up.

You should know that straw bale construction is an old technique; almost as old as humankind actually. Straw houses abounded in the Paleolithic era and they were found everywhere from Asia to Northern Europe and Africa (I think they’re still building with straw there, but that’s another story).

Romans invented concrete and Egyptians built the pyramids because they were much sturdier than straw, obviously; that’s not the point though. You’re not going to be able to toss together either one of those in a hurry.

What I am trying to illustrate here is that knowing the pros and cons of an ancient method of construction, especially in a survival situation, can’t hurt you a bit, and it may actually help.

With these things in mind, let’s take a look at the pros and cons of straw bale construction. 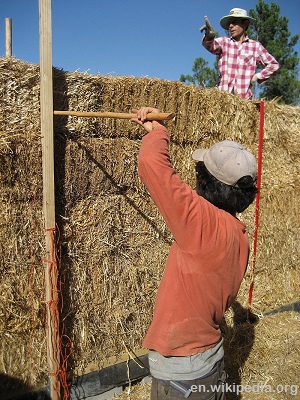 The first thing about straw bale construction is that’s really affordable, as straw bales are essentially made from a waste product. That’s true if you’re using regular straw bales that haven’t been chemically treated.  You’re also give this waste material a new life so you’re eco-friendly, too. The farmers make an honest extra buck and you’ll get a dirt-cheap building material with excellent insulation properties.

The specific cost of a straw bale construction depends upon how much you pay for your straw and how big you want your space. Bales can run as low as $3 or as high as $8, depending upon where you buy it. Your best bet is to work with a local farmer so you’re not paying retail for it.

Walls built using straw bales are extremely well insulated if built properly as long as they’re baled tightly and they’re thick enough. A straw bale construction is up to twenty percent more efficient in terms of insulation than a regular home, provided the straw remains dry.

Straw bale structures may be superior in terms of being fire retardant compared to stick framed ones; that’s due to the fact that bales are tightly packed and oxygen cannot penetrate between the straws, thus fueling the fire. This is a matter of debate because there are lots of factors coming into play, but basically you don’t have to worry in excess about fires in straw bale homes, at least not as much as in stick framed homes. Rendering makes straw bale constructions even more fire-resistant and usually straw bales tend to just smolder once the fire source is removed.

Because straw is not a very appealing food source for pests, straw bale homes are inherently better protected against pests and vermin than wood framed homes.

Straw bales are locally available virtually anywhere in the United States and stacking them is fast and easy, though they can be heavy.

In its simpler forms, straw bale construction is a very low-tech process and it’s suitable for the whole family. It’s the perfect activity for your children, providing them with the confidence of knowing they can build useful things. It’s an educational process, along with its obvious other benefits (as in, you’ll end up with an extra emergency shelter).

The notion of building a structure using straw bales is pretty straightforward even for novice builders; all it takes is one “expert level” straw bale builder to assist with the process, at least in the beginning. That means that you can use experienced friends to help you with your project, and you may return the favor afterwards, unless, of course, you’re good at stacking straw bales.

Straw bale insulation is an excellent choice in harsh climates, where the cooling and heating of your residence is important for comfort.

Last but not least, straw bale constructions are beautiful and versatile. 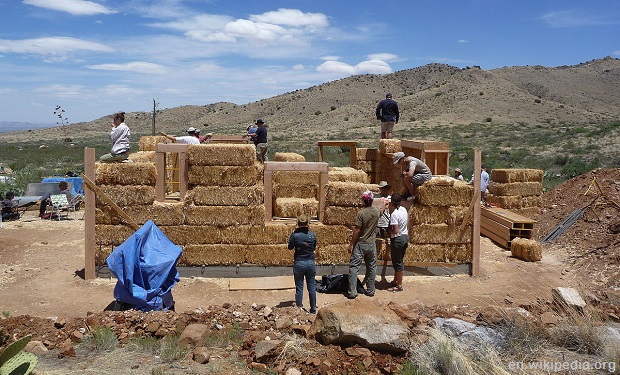 The Cons of Straw Bale Structures

Now that we’re all happy and optimistic about straw bale structures, let’s enumerate the cons, as there are quite a few:

You should be aware of the fact that using straw bales is not a conventional method of building stuff in the 21st century; you’ll have to develop special skills and develop your own technique if you want to achieve this goal. Basically, you’ll have to re-invent an ancient art of building, but if you’re the DIY type of person, this will present no significant problems. These skills are not difficult to learn but you must be aware of what it’s involved in straw bale construction.

A major factor that you’ll have to consider if you’re not living in Mexico is your local building codes. Obviously, these vary from town to town and country to country. Before proceeding with straw bale construction, remember to check out the legislation, else you might end up on TSA’s no flight list or something similar. I am kidding, but seriously, you don’t want to get hauled to jail for not following permit and building ordinances.

Climate is another factor to take into account before starting with this project. It’s hardly advisable to build using straw bales in an area with high humidity or really wet weather because moisture is the kryptonite of straw (as well as other building materials, but straw really is sensitive in this regard).

However, straw bale constructions, even if built correctly with high stem walls, big overhanging eaved roofs and interior/exterior plaster coatings, are still susceptible to fail in moist climates as they can decay, mold and even collapse. This happens mostly in areas with blowing rain, as the structure itself may get damp and never dry out completely.

Usually, raw straw bales are pretty inexpensive, but that’s only true as long as they’re not chemically treated. If you choose to buy them, transport them over long distances and get them treated, they’ll end up costing you an arm and a leg.

Despite being a very cheap construction material, building with straw bales is very labor-intensive, as they’re bulky to move around and also pretty heavy. You may require help with this project and labor costs are not cheap; after you’ve finished, you may end up paying more for a straw bale construction than for a conventional one. If you choose a contractor to help you with your project, well, that’s a bad idea. Straw bale homes, if built by a contractor, are 20% more expensive than regular homes, so it’s not worth the extra cost.

Straw bale-made structures require serious maintenance, unlike our modern homes if you want to keep them habitable.

To keep water and humidity away, you should apply layers of plaster on the outside walls and sometimes even on the inside. Usually, straw bale builders use lime plaster or clay-based plaster (these are the best, as opposed to cement stucco), which requires re-application from time to time.

Plus, there’s always the possibility of a psycho-wolf coming to blow your house down!

Lastly, there’s an acceptance problem as most home inspectors, contractors and banks are not familiar with straw bale construction and it may be difficult for you to get it approved, professionally built or financed.

I hope this information has helped you make a decision about straw bale construction. If you have any suggestions or additional advice, feel free to comment in the section below.