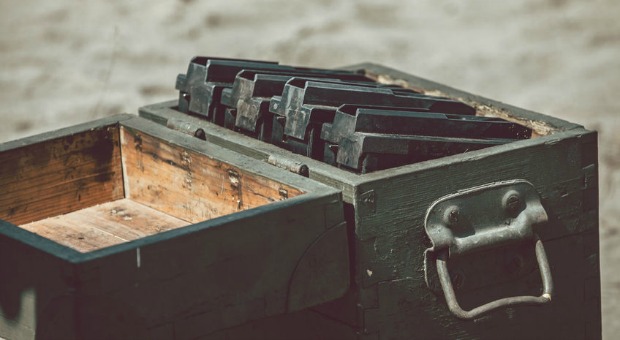 Storing Your Survival Ammo: A Quick Guide For Preppers

When most people think about organizing their ammo stockpiles, they do so based on cartridge or shell type.

For example, if you have four or five different types of ammo, you may be inclined to store them all in separate containers.

While this method seems practical at first glance, you may find that other methods will work better. In particular, you should not keep all ammo of the same type together in the same location.

Let’s say you have five different ammo types, and ten boxes of each one. You also have five ammo cans that you can use to store the ammo. Instead of putting all of one type in each can; put only two boxes of each type per can. In this way, you will have five cans of diversified ammo.

Here’s why this arrangement has a few advantages:

What a Good Storage Location Is

Good storage locations for ammo aren’t as easy to find as you might think. Many people try to bury ammo stockpiles under their home, stash boxes behind closet walls, and even put ammo cans under their bed. While these places may be safe, dry, and cool, they are also the first places thieves, rioters, and others will look if they invade your home.

When hiding ammo, you should make it your business to find locations that:

Today, there are many different kinds of containers that you can use to store ammo.

If you are budget conscious, then go for the metal ammo cans or boxes. You can purchase them new or used at surplus stores as well as at gun shops and gun shows. Before you buy an ammo can, make sure it is free of rust, holes, and other signs of corrosion. 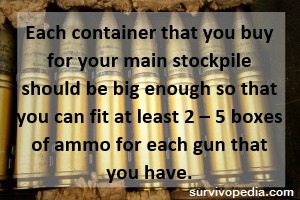 The lid should fit properly and create a waterproof seal.

It may also help to have some extra room in each box, especially if you haven’t purchased all of the guns yet that will be part of your permanent stockpile.

When choosing containers for ammo, think about what will happen in those first hours after a major crisis occurs.

To be fair, if you aren’t on a heavily guarded estate with plenty of supplies and acreage, you might have to leave your home and the majority of your stockpile behind. This is why your ammo storage plans must also include ensuring you can bug out with enough supplies to meet your needs.

Have a dedicated backpack or ammo pouch with at least five boxes of ammunition for the one gun you will absolutely take with you no matter where you go.

If this is your everyday carry gun (a.k.a. EDC), then by all means, go ahead and carry the bug out ammo with you as well. The backpack or pouch should be comfortable to wear and not be noticeable to others. Make sure that the internal pockets are waterproof, yet breathable so that moisture does not collect in the bag.

You will also need to inspect the pack on a regular basis to make sure that the constant weight of heavy ammo rubbing against the fabric does not lead to wear that will let water get into the ammo.

Many mid to advanced level preppers store away gunpowder in the hopes that they will be able to reload ammo in a time of need.

Storing gunpowder is not as easy or as safe as storing away cartridges and shells. Because gunpowder releases gases upon ignition, you should never store it away in an ammo can.

If the building the can is stored in catches fire, or the temperature reaches a critical point for some other reason, the ammo can will explode and cause major damage.

Also avoid storing gunpowder in the house or in a building for the same reason.

It is best to store gunpowder in a dedicated and well built outdoor magazine where it will be heavily guarded and safe to be around.

Supplies and Equipment to Have On Hand

Overall, there aren’t many supplies that you need to keep on hand to store ammo and keep it in good condition for years on end.

Regardless of where or how long you are storing the ammo away for, each container should have a few packets of desiccant in it. This will help reduce moisture and condensation.

Every can should also have a few extra waterproof Ziploc bags and a permanent marker. If a box happens to break or is damaged, then you can always put the cartridges or shells in the bag to keep them safe.

It is also important to store away clean rags so that you can clean ammo off if needed.

When you first buy an ammo can, you may not think it is very heavy. By the same token, lifting one or two boxes of ammo may not seem like much. Once you start adding a few dozen boxes to the can, you will find it very hard to push the can from one place to another let alone pick it up to move it.

This is why you will need to have a pull cart or some other kind of wheeled bed that you can use to move ammo cans from one place to another.

The cart should have some kind of pole or extension that you can raise up and use as a post for a pulley system. All you have to do from there is store some rope in the can and a pulley that can be attached to the pole.

At the very least, if you have to lift the ammo can into the back of a truck, you will be able to do so faster and with less risk of injury to yourself or others.

Let’s say you are a homeowner, but you don’t have much property; or you rent an apartment and also don’t have access to much land. Let’s also say that you have decided you are going to bug in regardless of what happens in your local area and in the rest of the country.

Many people that decided to sit it out through a hurricane or other natural disaster can tell you that one bad situation was enough to last them a lifetime.

While some people may have been lucky and got through several storms with no problems, a major social collapse is a very different and far longer lasting scenario. As a result, it is best to try and make at least some bug out plans and factor ammo storage needs into those plans.

Most people that plan to bug out after a major crisis actually have five or six locations that are located at different distances from their current position. These places may be the homes of family members or friends, or even areas where they have visited and feel they can live comfortably.

No matter where people are planning to bug out to, they will usually set up caches of supplies that can be accessed along the way.

When it comes to ammo, small caches like this in multiple and diverse places is just as important as food, water, and medicine. Just make sure that the areas you choose are safe and hard to find by others. If you do leave ammo with friends or family members, make sure that these are people you can trust regardless of what is going on.

Even if you are absolutely certain that you aren’t going to bug out, it will be to your advantage to store away ammo in several different locations.

If you are storing ammo in your own home, make sure that you have five or six locations that are hard to find, and one that is somewhat more visible.

You can use the more visible cache as a means to lure invaders into a zone of fire, or allow it to be taken in the hopes that invaders won’t go looking for the more important items in your stockpile. You can also set up snares and other booby traps that will neutralize invaders.

Never use explosives or anything that will start a fire near the ammo cans or you can wind up making the situation even worse.

No matter how carefully you store ammo away, some condensation will always build up, temperatures will change, and the ammo itself will begin to deteriorate. This, in turn, means that you should be using ammo even while you are building up your stockpile.

Always use the oldest ammo first and make sure that you replace it with the same or better quality rounds. For example, if you have about half your stockpile dedicated to rounds with steel casings, do not backtrack and buy more aluminum rounds to replace the used ones. Instead, go for more steel casings or see if you can afford rounds with brass casings.

Keeping your ammo stockpile in a steady state of rotation also helps ensure that you will actually practice shooting. From developing muscle memory to gaining confidence with cleaning and caring for weapons, just about everything starts with shooting on a regular basis.

If you can’t find a reason to go to the range other than rotating your ammo, at least it’s better than not doing any shooting at all.

Inspect the rounds on a regular basis. There are few things worse than having ammo cans sitting in the attic for decades without paying any attention to them. During this time, you may not know about rust that may have developed on jackets and casings.

If you wind up needing decayed rounds, you won’t be able to use them safely. If you rotate ammunition on a regular basis, you will isolate problems quickly and replace ruined ammo with something that you can use in time of need.

Gain as much experience as possible with different kinds of ammo. Once you know what kind of rounds your gun can take, try ammo from different manufacturers.

When you routinely rotate and use part of your stockpile, test out different products and see how they work for you. Later on, if your stockpile is gone or inaccessible, you will know how any ammo you find will work to suit your needs in a self-defense situation.