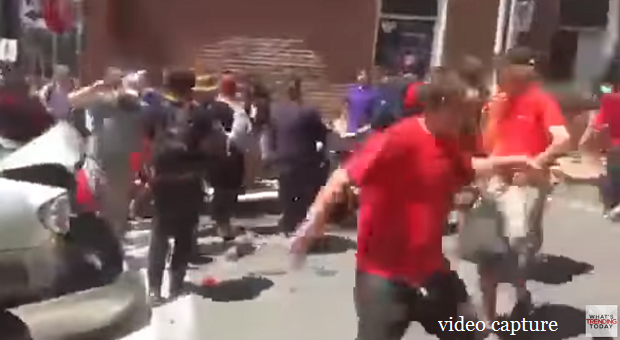 Barack Obama and his buddy Al Sharpton wore out the race card during the last eight years, publicly declaring everything from the names of sports teams to the kinds of foods served in school cafeterias racist, regardless of the motivations of the people behind those things. In this, they showed their own racism to the entire world.

“A belief that race is the primary determination of human traits and capabilities and that racial differences produce an inherent superiority of a particular race.”

Based on this, it’s clear that to be racist, one must be focused on race, rather than ability. In fact, it says that race determines ability, an idea that is totally foreign to conservative thinking.

It is also an idea that has no founding in fact, considering that we’ve seen people of every ethnic background rise to the tops of their professional fields. This hasn’t been based on “affirmative action” but rather on their ability.

Progressives have used the cry of racism to make America look bad, calling us out as a country for our racism. They conveniently forget that we were one of the first countries to abolish slavery in any form, going to war over it. They also ignore the huge strides that we as a country have made towards eliminating racism on a social level.

While there is no way we can say racism has been eliminated in our country, it is nowhere near what it was during the time of Martin Luther King Jr.

The Wrong Perception that Hurts

But conservatives face a new enemy in the fight against being called racist. From what they say about themselves, the alt-right has racism at its core. This faction consists of a number of white supremacy groups, such as the KKK. While a fringe group, they have become more vocal in recent times.

Granted, it takes some convoluted logic and ignorance of the facts to do that, but those are strengths of the left. They have no problem with them at all. As long as it fits their narrative, it must be true and anything that doesn’t fit their narrative must be false.

This has all suddenly come much more to light, due to the recent attack in Charlottesville, Virginia. A group of alt-right white supremists held a protest march against the removal of historic statues, one of the progressive liberal campaigns of today. This protest, which started off peaceful, was met by a counter-protest, which apparently took umbrage at the white supremists having a public event.

Information about exactly who was part of the counter-protest is still sketchy, but so far the Latin American Coalition, Anarchists and members of the Occupy group have been named.

Unsurprisingly, the two groups clashed and that clash turned violent. Both sides claimed that the other started the violence, citing the use of pepper spray, lighter fluid and clubs. The truth may never be known. Even so, both sides did their fair share of violence to the other, with a number of people being seriously injured.

It just got worse from there. James Alex Fields Jr., drove his car into the crowd, killing one woman and injuring 19 others. The mainstream media is calling him a neo-nazi, which would put him clearly in the camp of the alt-right. The interesting thing is that the information that has been dug up about him, fits the profile of the various mass killers who have plagued the country in recent years.

Let me say here that I condemn his actions, as do any conservatives I know. Murder is still murder, regardless of who is committing it or for what reason. He should face the full force that the law can bring down on him.

Likewise, those who committed other acts of violence were wrong and should be charged, unless they were merely acting in self-defense. They too should be punished, regardless of what side they were on, although their punishment should not be as severe, as their crime wasn’t.

But this brings up the question of how we should react to such situations. How do we keep ourselves from being embroiled in such things?

The answer to the first question is to condemn it, regardless of the perpetrators, like I just did. The idea that one group should have a license to practice violence, just because of who they are, is wrong.

The idea that the left has propagated, where some groups, such as Black Lives Matter, have a right to violent protest as part of their First Amendment rights, is false. The First Amendment gives us the right to peaceful protest, nothing more.

In other words, the alt-right march was legal, up until violence broke out. As much as I personally don’t like the idea of people marching with torches, because it conjures up images of the KKK lynching people, they had a right to do it.

Likewise, the neo-nazis had a right to use their flag, even though 6 million of my relatives were killed under that banner. As a conservative, I will fight for their rights to free expression, just as long as they don’t hurt anyone.

However, while I will fight for their right, I won’t take part in their fight. Not only do I not agree with their white supremist views, I don’t want to become embroiled in their mess. The best protection you and I have, is to stay away.

With the state of the country the way it is, and the massive political divide that we currently have, any public political protest is likely to end in violent confrontation. While many have skirted around that, without open conflict, the risk is just too high. It is not wise to participate in potentially inflammatory situations, just to make a political statement.

That’s not to say that we should be quiet. We should make our voice be heard. That is our right and no amount of political correctness or other form of censorship should stop it.

So while I would not personally put myself in the position of being part of those acts, neither would I back down from saying what I believe. The balance between the two can be tricky to uphold.

Let me put it this way. If I was invited to speak at a college campus, I would go, even if there were going to be protesters. But I would do everything I could to avoid those protesters, entering in through a back door, if I could. I would be there to exercise my First Amendment rights of freedom of expression, not there to take on the world in a fist fight. If any violence were to take place, I would not be the one to start it and I would try to ensure that I was not where it occurred.

This is survival on the most basic level. Being subject to violence does not guarantee one’s survival. So it is best to avoid it when we can.