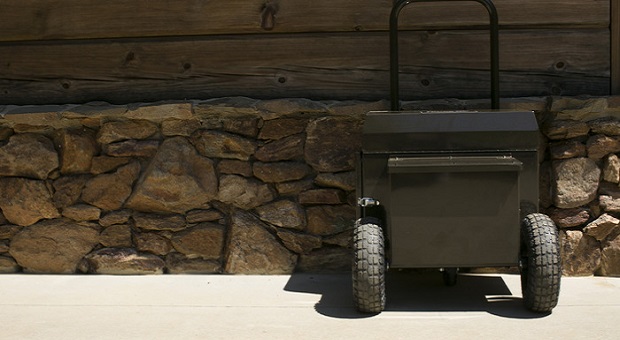 The Power Whisperer, Type M is an upgraded version of the popular Power Whisperer emergency power system. Manufactured in the USA, in South Carolina, this is a mobile power system designed and built by Americans, with the prepper in mind.

This stealthy power supply provides power for a family when the lights go out; whether due to a storm or an EMP. Since it isn’t powered by a gasoline engine, there is no noise to alert the neighbors that you have power, while they are sitting in the dark.

Typical power generators are noisy, letting everyone around know that you have electrical power. They also require quite a bit of fuel, which can be hard to come by.

In the aftermath of an EMP or attack on the electrical grid, the noise that they make could be catastrophic, inviting attack from those who didn’t bother preparing for the emergency. As a silent system, the PowerWhispered won’t give you and your family away. 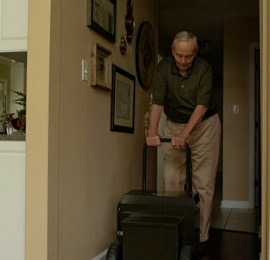 The system consists of a high capacity, 100 amp hour, deep cycle lead-acid battery. The battery is charged by a 100 watt, second generation, flexible solar panel, which is stored in a compartment in the unit. 45 foot leads are provided for the solar panels, allowing you to put them on the roof or some hidden area, without giving away the presence of your PowerWhisperer.

A 2,000 watt voltage inverter provides sufficient power to run any home appliance or power tool. You can also use the 12 volt output for powering devices that are designed for plugging in to a car’s power system, such as for recharging a phone or other portable electronics.

Speaking of car’s power system, they’ve included a car charger for recharging your PowerWhisperer’s battery, when the sun goes down or on a stormy day. While solar is great to have, it only works while the sun is up. If you’re running the vehicle’s engine anyway, this gives you an option to recharge, at a rate of 5 amps.

A power station, enclosed inside the unit, provide breakers and connections for drawing power from the unit, as well as the unit’s controls. This is one of the areas that have been heavily upgraded, with a more sophisticated, user-friendly controller.

The new controller has a LCD display, giving you full information on battery voltage, charging amps, amp hours and much more important information. The 200 amp breaker is marine grade, providing sealing from the elements and ensuring that the unit won’t be damaged if it rains.

Connection for the solar panels is provided in the storage compartment. You can also attach additional solar panels for faster regeneration of the system.

The entire unit is housed in a rugged, 1/16 inch thick aluminum case, mounted on two large 10″ wheels, for easy transport, just like a hand truck. The aluminum keeps it lightweight, while the all-metal case makes it a perfect Faraday Cage.

All the components of the unit are protected from EMP, whether caused by a nuclear blast or solar activity. The PowerWhisperer can be used for bugging in or if you are bugging out to a prepared 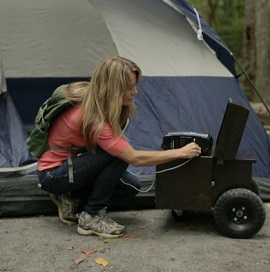 bug-out retreat, it can be brought along. Removable transport handles make it easy to carry, and can be removed for storage once you have reached your destination.

The housing is actually split into separate compartments for the power cell, storage and system management. It turns out there is no commercial grade hardware available for securing a 66.5 pound battery.

The designers solved this problem by putting the battery in its own compartment. A woodland pattern camouflage net is provided for help in concealing the unit from neighbors while in use.

The unit comes complete with an EMP protected compartment for storing the solar panels, that is also big enough for storage of radios and other small electronic devices, keeping them with the power supply, while protecting them from EMP. Made in the USA, you can be sure about the quality of this unit.

The Type-M is fully upgradable. The solar panel the unit comes with can be upgraded with the addition of a second 100 watt solar panel. There is also room to accomodate a second power cell, increasing storage capacity. You can even use the PowerWhisperer together with a wind turbine, integrating your power systems perfectly.

All in all, the upgrades to the PowerWhisperer have taken an already great unit and made it even better. Each one alone may not seem like much to brag about, but taken together, they make the overall unit easier to work with, more capable and more prepared to meet your needs when that next emergency comes along… even if it’s an EMP.