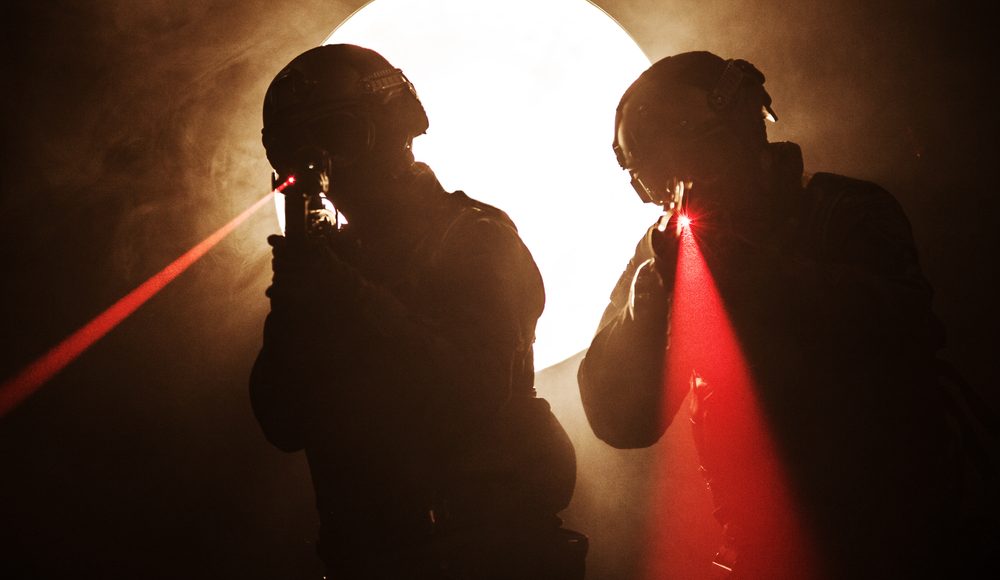 Practicing Shooting when Ammo is Scarce

Like everyone else who owns firearms, I’m tired of ammo shortages.

Oh, I’ve got my stock of ammo set aside, but I don’t want to be using that for practice ammo. That’s my emergency supply for when things go to pot, and I’ve got to go into long-term survival mode. While there was a time when I would regularly pull from my stockpile for practice, that was also a time when I could quickly replenish that stock. With the shortages we’ve been running for over a year now and the high prices they’ve caused, I don’t feel comfortable taking from that stock.

That’s not to say that I don’t need to practice, though. Shooting is a skill, and like any other skill, it must be used or can degrade rapidly. I remember what happened to my shooting skills while I was out of the country for several years and couldn’t shoot regularly. I was horrified at how bad I was when I started shooting again.

Adding to the high cost of ammunition and its scarcity, I live in a small town without nearby shooting ranges. It’s almost an hour drive to the range I shoot at when I can go. I’ll have to say, I liked it much better when the range was only five minutes away. I could talk myself into believing that taking an hour out of the day to go shooting was “work,” considering that it has something to do with what I do for a living. I have a much harder time convincing myself of that when it’s three hours instead of one.

Nevertheless, I need practice. As someone who carries every day, I consider regular exercise necessary. The ability to shoot quickly and accurately is an important skill, especially considering how the adrenalin of facing an active shooter will degrade our shooting ability. I need to shoot well enough that even if my ability is impaired by 80%, I can still hit my target.

One of the best practice tools for the shooter is dry fire practice. Dry fire is shooting a gun without any ammo in it. Many people think that this will cause damage to their weapons, but in reality, it won’t for centerfire firearms. It can cause damage to rimfire firearms, however, as the firing pin can hit the wall of the breach, which can cause it to bend.

But unless you carry a .22LR pistol as your daily carry, there’s little risk in using dry fire as part of your practice routine. I use dry fire regularly to maintain my shooting ability. When I returned to the US, after being abroad for a few years, it was my dry fire practice, more than anything else, which helped me to regain my shooting ability.

For dry fire to be that effective, it has to be taken seriously. That means doing it regularly and doing it as if you had ammo in the gun. The simple operation of the weapon without practicing deliberately isn’t going to accomplish anything.

More than anything, dry fire works on trigger control. While shooting live ammunition will show trigger problems, seeing them when doing dry fire is easier. That’s because, during dry fire, our errors aren’t hidden away by the recoil of the gun. If we pay attention to the sight picture while pulling the trigger, we can easily see where the muzzle of our gun goes, indicating our trigger control problems. Watching the sights while pulling the trigger in dry fire allows us to see our mistakes.

The diagram above shows common trigger control problems for right-handed people. The same issues exist for left-handed shooters but manifest in shots going to the opposite side of the chart.

One of the problems with dry fire is that you have to cock the pistol or rack the slide between each shot. Without the expanding gas of the shot to cycle the gun, it has to be done manually. So dry fire will never be the same as regular fire and is a relatively poor substitute for rapid fire, but that doesn’t eliminate the utility of dry fire as a valuable means of practice.

When I started my dry fire practice, I had a severe problem with jerking the trigger. It wasn’t visible when I was shooting, other than by most of my shots ending up low and to the left, but it was in dry fire or when I had someone randomly load a snap cap in my magazine. Yet when I was doing dry fire practice, the muzzle went down and to the left, showing I was jerking the trigger.

It is much easier to see when there’s a laser sight attached to the gun. I’ve installed laser sights on all the guns I regularly use because of my poor eyesight. If I have the wrong glasses on, I can’t see the gun’s front sight enough to aim properly, so even though I practice with the iron sights, I also have laser sights. If nothing else, they come in handy on dry fire practice.

Just as with regular shooting, a target is necessary for dry fire practice. It doesn’t have to be a bulls-eye target, as you won’t be scoring your shots. Instead, you can use anything in your home as a target. I like to vary my targets, selecting things hanging on the wall or sitting on tables. That variety is a bit more like an actual live-fire situation and forces me to treat each shot as an individual one, rather than just pointing my gun at one target and pulling the trigger repeatedly.

There are several different dry fire exercises that you can use to practice and improve your ability.

There are a few different companies that have come out with laser dry fire systems. These either use a laser sight on the gun or a laser that’s inserted into the barrel, much like what is used to boresight a gun. The system keeps track of shots, scoring where they hit the target. Depending on the system, it may show exactly where the shots hit on the actual target. Some even work in conjunction with your cell phone.

While I don’t have any of these systems, I can see a definite advantage to using them. More than anything, they would keep any of us from cheating, telling ourselves we did better than we shot. Since the system scores where the shot hit, we can’t pretend to hit the bulls-eye when we jerked the trigger. I can see where that would be a real advantage.

Dry fire practice isn’t just for practicing shooting; it can also be used for other gun-related skills. We call gun drills because they involve working with a gun, even though they aren’t shooting drills. Practicing these can help ensure that you are ready to win the battle, not just shoot your gun.

One of the nice things about these drills is that they can be done anytime. It’s much better to do them while doing other things so that your mind is at least partially occupied with other activities. Gun drills, while watching TV or just walking through your house, are great, as they allow you to develop the muscle memory necessary so that you can do these things for real, in a firefight, without having to concentrate on them.

Some Real Practice at Home

To add challenge to shooting that air pistol, I’m usually shooting at either rats, mice, or cockroaches… yes, cockroaches. My dog doesn’t like those pests on our property, so it tends to hunt them. To escape the dog, all three of those types of critters end to go for the high ground, where my dog can’t get them. To get her to stop barking at them, I’ve got to shoot them.

That’s actually what gave me the idea of practicing with an air pistol. I figure that if I can shoot a cockroach with an air pistol, I’m doing pretty good. Since practice is practice, that translates over to the shooting I do with my other sidearms, helping to keep me in practice, should I ever need to do it for real.

Oh, and pellets for the air pistol are still available and sold at a reasonable price. 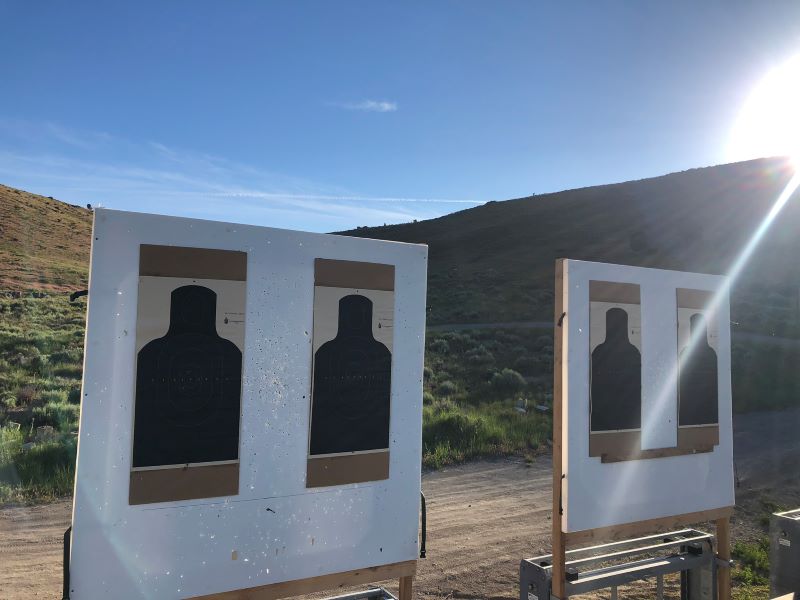 How Competitive Shooting Can Effect Your Survival 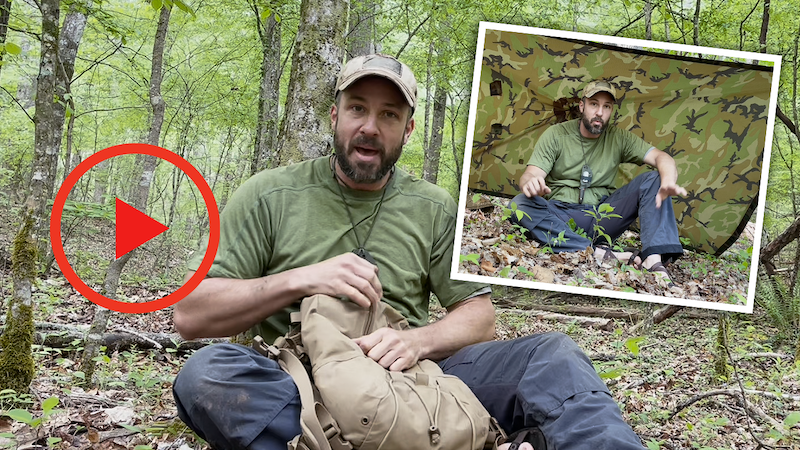 VIDEO: How to Rig a Poncho Lean To 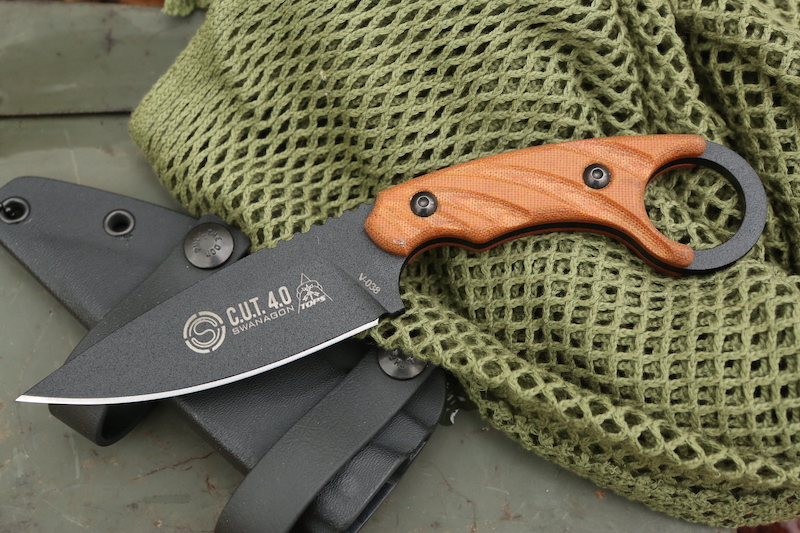