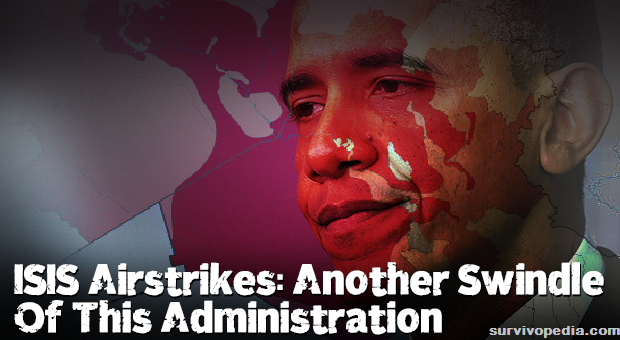 ISIS Airstrikes: Another Swindle Of This Administration

ISIS has been ravaging its way across Syria and Iran for months now. They’ve killed, raped, pillaged and beheaded thousands of people, as they’ve brought territory under their rule. Within what is really a very short time, they’ve essentially undone just about everything our military accomplished in the Second Gulf War.

This naturally raises the question of whether or not we’re about to see a third Gulf War.

While he was vacationing in the Martha’s Vineyard luxury resort, the Golfer in Chief Commander in Chief took a few moments out from his heavy schedule to authorize air strikes against ISIS, or as they call themselves now, the Islamic State.

That sounded like a good beginning, especially considering that we won both the first and second Gulf Wars by starting with airstrikes. However, when Obama finally returned from his vacation, he said that he didn’t have a plan for dealing with ISIS.

Is It Worth the Effort?

Granted, plans take time to formulate. You’ve got to gather intelligence and look at troop dispositions. Once you know the enemy’s capabilities, you decide what your goals in the conflict are. Then you start looking at the various options for attacking them, ultimately settling on the one which offers the greatest chance of accomplishing your goals, for the least possible cost.

All that takes valuable time, even more so if you have to develop the capability that you need to defeat the enemy. But, and again I say but, you never tell the enemy you don’t have a plan for dealing with them.

We’re not talking about beating Hitler’s Germany or the old Soviet Union; we’re talking about defeating a terrorist organization that’s trying to act like an army. The main skill these people have is the willingness and readiness to use violence. They’re not strategic thinkers; and while they do have arms and the ability to use them, their numbers aren’t anywhere near what we faced in the last two wars.

As a terrorist organization, ISIS is more accustomed to guerrilla warfare, not standing up and facing other armed troops. So, the airstrikes we’re sending over there are hitting such massive targets as a lone truck on the road. While it’s great to get rid of that truck of terrorists, that’s really a lot of firepower being expended for such a small target.

It reminds me of Vietnam, where we were expending planeloads of ordinance to kill a couple of guys pushing bicycles loaded down with rice for the Vietcong troops. A lot of firepower expended, for very little return.

Obama stated in his speech about ISIS, “Our objective is clear: we will degrade, and ultimately destroy, ISIL through a comprehensive and sustained counter-terrorism strategy.”

Correct me if I’m wrong, but isn’t that just a bunch of political mumbo-jumbo? That doesn’t sound like a plan or a strategy. It sounds more like an isolated sound bite, created to impress the masses with its profound wisdom and deep insight.

Of course, we need to degrade and destroy the enemy, that’s what warfare is about. You have to degrade their ability to fight and destroy their weapons. But Obama coupled that with the term “counter-terrorism strategy.” That’s not warfare, that’s an attempt to find and neutralize them.

The problem is this; sending airstrikes against a dispersed and hidden target, like a terrorist organization, expends a lot of firepower, for little results. Our military learned that in Vietnam, even if our political leadership didn’t. To take out a dispersed and hidden target, you’ve got to put boots on the ground, dig them out of their holes and exterminate them. That’s a whole lot harder and riskier than sending over air strikes.

So, what we’ve done is nothing more than a symbolic gesture. Are ISIS soldiers getting killed? Undoubtedly; but I would venture to guess that they are recruiting new troops faster than our airplanes can shoot up the ones that we’re taking out. If they manage to get some good anti-aircraft going, we may not even do that good.

The Other Side of the Coin

Considering that terrorism was actually invented in the Middle East, as a means of warfare which would allow small countries to force large ones to do what they want, that’s not all that surprising.

There are reports that ISIS has a cell located in Ciudad Juarez, Mexico, preparing to cross the border. In other words, that cell is only one river away from being in the United States; and there are a number of bridges crossing that river.

We don’t know if others are already inside our borders; but we do know that Muslims have crossed the border, as discarded prayer rugs and other paraphernalia have been found along the corridors used for smuggling illegal aliens into the U.S.

Coincidentally (or maybe not), this is happening at the same time that our southern border is being inundated by tens of thousands of illegal aliens crossing our borders. Many of these “children” are actually teenage gang members coming to the United States, taking advantage of Obama’s amnesty.

Media reported that over 300 people whose names are on terrorist watch lists have been allowed into the United States and are still free, awaiting an immigration hearing. That’s in addition to the 3,000 or more gang members who have been set free. Our government is literally allowing criminals to wander the streets and not even letting the rest of us know where they have been set loose.

So, instead of protecting our citizens against attacks by ISIS, the government is harassing and threatening law-abiding citizens. Obama and the Democrats are doubling down on racism, lies about Republicans and the Tea Party and anyone of a conservative mindset.

They are bowing to Muslim pressure that any training of our law-enforcement personnel which states that Muslim terrorists are what they are, is racist teaching. Instead, the government is labeling Christians and conservatives as terrorists and those Muslims as “peaceful.”

I think you can see where this is leading as well as I can. We are living in dangerous times. With our government handing the key to the door to our enemies, we can expect them to attack. How soon they attack and in what manner they attack are really the only questions that need to be answered.

Even if our government isn’t prepared for these attacks, you and I need to be. I am armed 24-7. I keep my internal radar and situational awareness on high, every time I walk out my door. Even though the area I live in isn’t a high-profile target for terrorists, I’m not dismissing the possibility.

As a Marine penned in an open letter to ISIS that’s been traveling around the Internet, “Do you really think you stand a chance on US soil? Do you really think it would be smart to poke that bear? Remember we are armed in the US and I can promise you that the Geneva Conventions will not apply to you. You attack us and there is no mercy. The ball is in your court Islam, we are more than ready to send you to your “prophet” Mohamed…”

I stand with that Marine.