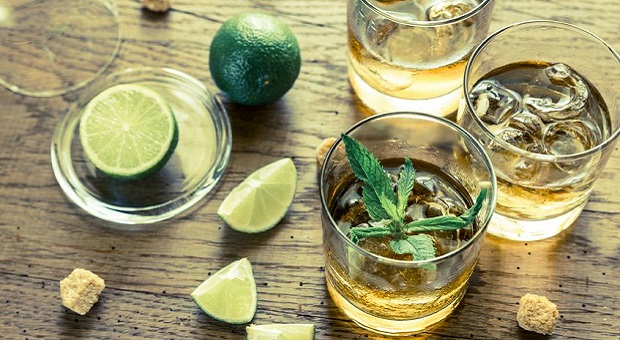 Back To Basics: How To Make Rum At Home

Ok, so this one is for those of you who just don’t want to spend life after SHTF without the occasional cocktail. For that matter, booze is going to be a hot trading commodity if a global, world-altering event occurs and alcohol can actually be used to sterilize wounds. So, we’ll just say that we’re going to teach you how to make rum at home “for medicinal purposes only”. Wink, wink.

We all know that rum is a liquor that comes in every color from clear to almost black. It can be very light-flavored, spiced or even dark and rich. What most of us DON’T know, though, is what It’s actually made of.

In essence, rum is just molasses, sugar, yeast and water. That’s it. Of course, if you want to make it a spiced rum, you’re going to need to add those too, but those are the four basic components that make up rum. Oh, and time. It’ll take anywhere from 4 to 10 days from pot to glass.

What Equipment Is Required to Make Rum at Home?

This is where it gets tricky. You can get really fancy with this process or you can keep it fairly simple. Since we tend to be the kind of people who like to keep it simple, that’s what we’re going to do today.

There are several recipes and directions out there that tell you how to make homemade rum one bottle at a time, but what’s the fun in that? We’re going to make ours in a 5-gallon bucket.

You’re also going to need a stockpot, a hydrometer, an airlock and a distiller. You can make your own airlock fairly easily by following many of the instructions that you find online or you can pick on up off of Amazon for about two bucks. Just buy one; it’ll work like it’s supposed to and you won’t have to dig around for a cork and a pen and epoxy and all the other stuff required to make your own.

Here are your basic ingredients:

The standard rule for most yeasts is 1 tablespoon per 5 gallons of wort, or beginning product.

How to Make Rum at Home

Now we’re getting down to the brass tacks. There are actually only two steps in making the rum; three if you’re going to age it. That’s not strictly necessary, though if you want that dark, heavy flavor, you’re going to have to do it.

Without aging, you simply won’t get that dark, oak color and flavor. If you ask the connoisseurs, rum should be aged for at least a year. You can wait that long if you really want to, but I doubt that most people will after SHTF. It’ll be tough enough to wait the 10 days!

Before you do anything, you need to make sure that ALL of your equipment is squeaky clean. Just a bit of dirt or bad bacteria will ruin your batch of rum.

The first step is fermentation. If you’ve read any of my wine or beer making articles, you know how this works. You need to add half of the water and all of the sugar and molasses to a stockpot. If you have one big enough to hold all of the water, then do so.

Bring the water up to where it’s warm, but not so hot that you can’t stick your finger in it. Dissolve the sugar and molasses well. The sugar will be easy; the molasses will take a little more work.

Let the mixture cool until it’s just warm – if you have a candy or meat thermometer, test it – it should be between 75-80 degrees. It needs to be warm enough to activate the yeast but not hot enough to kill it. Take out a cup or so of the sugar water and dissolve the yeast in it. When it starts bubbling and foaming, you’re in business. Add it back into the pot with the rest of the sugar water.

Now you need to pour the wort (that’s what it’s called at this point) into your fermentation bucket. This can just be an extremely clean 5-gallon bucket but you need to set it up with your airlock attached to it first.

Lock the lid down and wait for the fermentation process to start. You need to store the bucket in an area that’s between 70-80 degrees F. Within 24-48 hours, you’ll notice that there are no more air bubbles coming through the airlock.

This is when you start timing your rum. It will take 3-10 days for it to be ready. Use your hydrometer to test it every day after about the 3rd day. When the hydrometer hits 990 or stays the same for three days, it’s time to distill it. 990 will put it at about 16-18% alcohol, or 32-39 proof. Letting it sit a bit longer may make it a bit stronger. That’s when you follow the 3-day rule.

Here is an extremely important step that you don’t want to skip. Once the hydrometer says that it’s done, place your bucket somewhere cool for a dad so that the yeast settles to the bottom, if it hasn’t already. You’ll know because the top of your wort will be foamy looking. If it’s not, the yeast has already settled and it’s ok to distill it.

DO NOT pour the yeast into the distiller. It will alter the taste of your rum. Speaking of tastes, your wort may smell really funky at this point; don’t worry about it because it’s supposed to.

At this point, you can drink your rum or you can put it in a cask and age it. You can also get fancy and add some oak chips to the bottom of your jars (unless you’re using bottles, then this can be a bit tricky) and let the rum sit for a few days absorbing the flavor of the wood. If you like spices, add some cinnamon or other favorites. There are plenty of recipes across the web for “spiced rum”.

If you are interested in making your own food then click here to find out more about this awesome survival guide on food independence.

Now you know that you can make rum at home from simple, basic ingredients in very little time. If you have anything to add, please do so in the comments section below!