How To DIY A Paracord Survival Grenade

If you’re an outdoor aficionado, you’re probably checking constantly for survival tips and tricks and, as you may already know, paracord is one of those special items you should have on your person when SHTF. In other words, always have it within reach.

When it comes to survival gear, there are 4 basic things you should be capable of doing with it: shelter-building, filtering water, gathering food, and starting a fire. In an ideal world, your survival kit must be able to resolve all these issues without problems.

If you’re able to achieve this goal, you’ll be able to survive for a few days until help arrives, or possibly even indefinitely, in case the cavalry is busy somewhere else. You know what I am talking about – if you can procure water, food, shelter, and make a fire in a survival situation, you’re pretty much guaranteed for winning the prepper academy award.

That’s because a properly made paracord grenade will provide you with all the basics of survival, i.e. you’ll be able to hunt and fish, start a fire, build yourself a shelter and, why not, even boil water.

The devil is in the details. That’s an old saying which is truer than ever when it comes to paracord survival grenades.

The thing is, you can buy a pre-made one. In case you’re wondering why, well, paracord survival grenades have already achieved legendary status among the prepper community, which is growing exponentially year after year. Because of that, this pre-made item sells quite well indeed.

In a nutshell (pun intended), a paracord survival grenade has a core which contains essential survival items, all wrapped with paracord, which in itself is another crucial survival piece of gear, ending up in a nicely-wrapped, portable, space-saving packet of survival goodies.

Now, talking about commercially available items, some of them are wrapped together using a cobra knot with the paracord. This style knot makes the grenade look great, but looks won’t help you survive if it’s not functional.

The problem with the cobra knot is that despite its cool appearance, when the rubber hits the road and you need to use it, it is pretty hard to deploy. It’s not as quick as you may need it to be at the critical moment when your life depends on it.

Now, the problem with using other types of knots is that you may end up with an ugly looking paracord grenade, but in my book, usability trumps beauty, so fair warning.

As per future reference, I would suggest DYI-ing your paracord grenade using the quick-deploy type of the cobra knot, which is the solomon bar.

This type of knot requires some practice and patience, but it’s fairly easy to do after you get the hang of it, and it’s lightning fast to deploy if so desired. Here is an example, take a piece of paracord and start practicing.

Moving along with our story, nowadays almost everyone has heard about paracord bracelets, which actually became more like fashion pieces rather than survival items for the urban prepper. A survival paracord grenade has more than just plain rope, but what’s inside is what matters the most. It’s here that you must pay extra attention.

A basic survival paracord grenade holds about twenty feet of paracord. Ideally, you should go for mil-spec paracord, but any type of high-quality paracord, rated to at least 500 pounds, will do the job if you’re stranded in the middle of nowhere, in the wilderness and all that jazz.

Obviously, you can create a bigger or a smaller one, depending on your needs and personal preference, but as a general rule of thumb, 20 feet, or roughly 6 meters, of paracord are marking the sweet spot, dimensions-wise. The idea is to strike the perfect balance (as in portability/convenience) with your survival grenade, else you can choose to carry some rope and a bunch of survival tools in a bag if you’d rather.

As I already told you, one of the key issues with DIY paracord grenades is to be able to take them apart easily. For example, consider that you’re out there in the cold (it’s winter after all) and your hands are frozen stiff. Struggling to untie the knots of your paracord grenade for deploying your survival gear in order to make a fire is not the best idea in a survival situation, right?

So, if you want to build the perfect paracord grenade, you must follow a few simple steps, together with knowing perfectly well what survival tools to include inside.

1. Built it around a carabiner

A paracord survival grenade is built around a carabiner. That’s what makes it look like an actual grenade. Aesthetics aside, a carabiner is a staple item in any respectable survival kit.

2. Put some fishing and trapping gear inside

Next, considering that one must eat in order to live to fight another day, you must put some fishing and trapping gear inside your survival grenade. Items such as snare wire, small game trapping items and a small fishing kit would be perfect.

A small LED flashlight would come handy when in need, i.e. starting a fire is not possible and you can’t find your way in the darkness. After all, the sun has a tendency to disappear for hours, especially during the winter, and if you’re afraid of the dark … I’m kidding of course, but an LED flashlight is an excellent item to have in your survival kit in any situation.

4. Include a small blade and a Ferro rod

Another item to consider is a small blade and a Ferro rod, as an additional fire-starter item. Ideally, one should carry a survival knife at all times, but having a backup is always smart, hence the small blade recommendation.

These are the bare minimum survival items to consider, but use your imagination and don’t be afraid to improvise (a small lighter or match sticks, striking sheet, etc).

Last but not least, once you have decided what to put inside the core of your survival paracord grenade, don’t forget to wrap ’em all up using a tin foil. Besides keeping your survival gear inside dry, the tin foil sheet can be used as a water container and you also can boil the water in it, thus destroying the bacteria.

Remember – all items must directly contribute to base survival in one way or another.

Click the banner below to grab your Paracord Survival Kit! 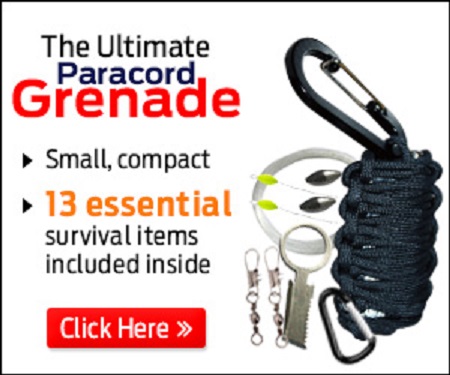