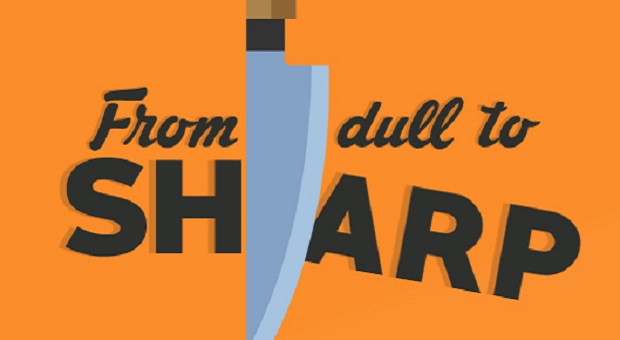 From Dull To Sharp: A Video Guide To Sharpen Your Knives

There’s an art to sharpening a knife, though, and most people can’t get it right straight out of the box.

As a matter of fact, you’re more likely to take more of the edge off of it than to actually sharpen it if you try to do it on your own, at least for the first few times. It’s definitely a process with a learning curve, but you can definitely do it.

Most people have a knife sharpener at home that only requires that you slide the knife through it a few times in order to get a decent edge on it, but though that may be good enough for home use, you want it to be as sharp as possible for survival purposes.

Fortunately, Peter Nowlan of knifeplanet.net has written an article that explains exactly how to sharpen your knife using Japanese Water Stones. He’s even included a step-by-step video that details the process.

The best approach (and one that I personally agree with), is to use more than one whetstone, starting with a course one and moving on to stones with a finer grit in order to get a perfectly-honed, razor-sharp edge.

The purpose of using the course stone first is to get any nicks or imperfections out of the blade quickly and to remove any fatigued metal from the edge. This will lead to the building of a burr, or the first part of a wickedly sharp edge. After you build your burr and get the sharpening process started, you continue on with finer-grit stones.

Many people believe that it’s a mistake to give a rookie a course stone with which to sharpen a knife because it can ruin the edge, but knife sharpening is just like every other skill: a person should learn every step from beginning to end properly. There’s also a certain satisfaction earned from moving from course to fine and seeing the knife come into form.

After reading the article and watching the video, you’ll know how to use a series of whetstones in coarse, medium, and fine grit in order to make your knife so sharp that it will shave the hair off of your arm. You’ll also learn how to use the coarse stone properly so that you won’t damage your knife. The purpose of the medium grit is to simply smooth out the blade after the course stone removes the blemishes, and to get it to the point that it’s ready to be honed to a razor’s edge. The fine grit stone is the stone that puts the final edge to the knife.

There are also some suggestions for particular sharpening stones that he personally finds useful and shares some insight into WHY he sharpens the way that he does. He also offers some additional advice on alternate methods. Perhaps that’s the best part of his presentation; he doesn’t limit the process to “his way or the highway”.

The most important thing that you need to remember is that both water and patience are critical to the process of knife sharpening! Skip over now and check out the entire article HERE, as the writer has spent years learning how to sharpen knives and presents his information in a friendly, easy to understand format that’s useful to beginners and interesting to even the most experienced.