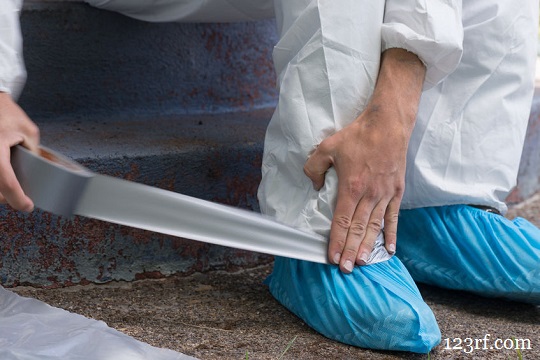 How Many Ways Can You Use Duct Tape For Survival?

If you’re a serious survivalist and most of all a DIY aficionado, you probably know that saying: if it doesn’t work nice and proper, bring the duct tape, Sally!

Duct tape is that kind of a “jack of all trades” piece of survival gear that can be found in any respectable prepper’s paraphernalia, along with paracord, tarp, a Toblerone candy bar (just kidding) and all that jazz.

Joking aside, duct tape can be described as the quintessential multipurpose survival-item and even if you don’t have it in your EDC survival bag (though you should) or in your bug out bag or whatever, you probably have some at home.

Now, if disaster strikes, or who knows, maybe you just like to play with duct tape, it would be nice to learn a trick or two about duct tape projects for your survival.

I mean, in the worst case scenario, having a few rolls of “duck tape” it won’t hurt you a bit and, on top of that, you’ll be that uber-fun guy (or gal) at the party who can make origami using duct tape.

Now, let me state an axiom (duct tape rules!) by asking you a simple question: is duct tape the ultimate survival tool? That was a rhetorical question, i.e. I already know the answer. But, to tell you the truth, I really can’t tell for sure if the humble duct tape deserves such a glorious definition. However, duct tape can be used in so many survival scenarios that it will make your head spin.

I can safely proclaim that if you twist my arm hard enough, I’d be able to build you a (small) pyramid using super glue and large amounts of that glorious duct tape.

Hence, even if it doesn’t necessarily qualify as the ultimate survival tool, “duck tape” is pretty close to it. To begin with, if you don’t already have a few crates of duct tape, don’t worry; you can buy it from Amazon before SHTF and the internet goes missing.

Now, let’s talk about a little bit of ancient history: duct tape, just like many other marvelous inventions (read A-Bomb) was created during WW2, as necessity is the mother of invention. The US military required some miraculous stuff in order to be able to easily perform repairs in the field of battle.

The first duct tape (a strong version) was thus created by a division of Johnson & Johnson and Permacell respectively for this purpose.

And if you were wondering about the “duck tape” thingy, well, duct tape comes from “duck tape”, which is what the GIs called the miracle tape, because it’s waterproof, just like ducks, see?

Now, boring details aside, let’s take a look at some uses and projects involving duct tape, shall we?

Let’s suppose you’ve just arrived at the campsite and you notice a little tear in your tent. Obviously, this is hardly a problem if you have a roll of duct tape in your bag. All you have to do is to cover the hole using a patch of duct tape and to make it extra-safe, mirror the patch on the inside. Weather and pesky insects will be secluded outside, where they belong in the first place.

You can make a rope using duct tape, did you know that? And if you wonder how, well, you’ll just have to twist one or more lengths of “duck tape” into a rope/cord of sorts. The same procedure can be utilized for DIY-ing an emergency clothesline from twisting a long piece of duct tape.

As per its initial moniker, “duck tape” is excellent for waterproofing your gear in a survival situation, hence pretty much anything (food, money, survival gear) can be waterproofed using duct tape, including leaving a (waterproofed) note for rescue teams/family members in the aftermath of a disaster.

In a very harsh winter survival scenario, you can use duct tape to cold-proof your boots. By applying duct tape on the insoles of your boots (silver side up) you’ll basically perform an insulating job, as the duct tape will reflect the body-heat from your feet into your boots (it really works!).

It is not uncommon for people to lose their minds in a crisis situation and here duct tape restraints come into play. You can always use duct tape for immobilizing the threat of that odd person in your group who is either incredibly stupid or openly hostile. To prevent the rogue element from endangering the safety of everyone around, just duct tape (yes, it’s a verb) his/her hands around a strong pole or tree and let nature take its calming course.

Are there any other uses for duct tape? Of course there are:

If you’re bored at home and want to give purpose to your life, you can always try to build a kayak using wood glue, cedar strips and the always awesome “duck tape”. I’ve also heard stories about boats built entirely out of duck tape and cardboard. And that’s because duct tape makes for an awesome waterproofing material (applied over cardboard that is).

During rainy days, you can always wear duct-tape pants, especially if you’re out of rain gear. Here’s a video about how to make a duct tape suit.

Also, you can DIY duct tape pouches, which are fairly easy to manufacture and, most importantly, they’re also waterproof. You’ll not have to worry about your gear getting wet. Here’s how to DIY a knife-sheath with duct tape.

And here’s a survival belt pouch made from you-know-what.

Obviously, you can make a duct tape wallet too.

Speaking of improving one’s life, duct tape is excellent for building hammocks. If you think I’m kidding, well, click here and you’ll learn how to make your own hammock for camping trips and what not. Shoes made using duct tape are every bum’s dream, but joking aside, having proper footwear in a survival scenario may save your life some day. Click  here and see how it’s done using just cardboard and “duck tape”.

Duct tape also works great for bandaging wounds or to affix bandages and even for blister care. The blistered area should be covered with some cotton glaze, then duct-taped.

For homestead use, you can improvise a temporary roof shingle by wrapping plywood (cut to size) in duct tape. It’s nothing fancy, but it will close the gap and keep you dry until you can properly fix your roof. Also, you can duct-tape a broken window (crisscross the broken pane) before removing all the broken glass, thus making sure shards will stay into place.

If you wrap “duck tape” around your broken (eye) glasses, you’ll definitely look like a nerd and a weirdo. But in an outdoors survival situation, being able to repair your damaged glasses so that you can see properly is more important than fashion issues, isn’t it?

This concludes today’s crash course into duct-tape uses. Now, take a moment and think: are you ready to use this knowledge for survival?