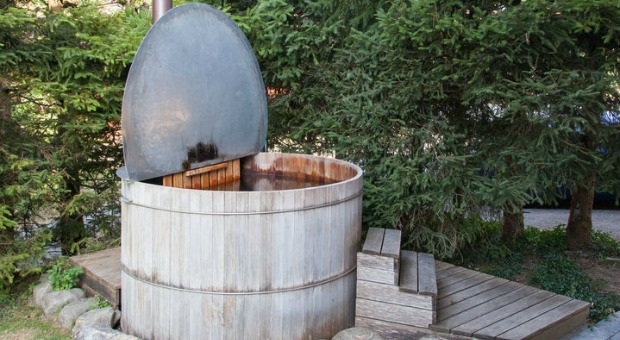 When it comes to off-grid survival, personal hygiene is one of those delicate subjects preppers seldom talk about.

Ok, I know that women preppers consider personal hygiene a priority even after a plane crash, but generally speaking, surviving off-grid means that you must have a roof over your head and some chow in your belly, and eventually a cushioned place to sleep in. That about sums it up until cavalry arrives and gets you outta’ there.

However, living off-grid is slowly becoming a trend among outdoors enthusiasts and maybe student loan beneficiaries who cannot afford to pay both the rent and what’s owed to the good ol’ Feral Gummint.

Here is where the off-grid lifestyle comes into play. But living off-grid is not easy; not by a long shot. There are so many problems and challenges in a world without electricity that I don’t know where to begin.

One of them is the aforementioned issue, the personal hygiene thing – an issue that never occurred to you until now because you’re probably living the 21st century life style, with hot water pouring out of the faucet and the whole nine yards.

Basically, we all take modern hygiene conveniences for granted and that’s normal, because we’ve benefited from these cool things for almost 2 centuries now.

But, if you’re living off-grid together with your family, you’re probably aware of the fact that cleanliness is next to godliness, not to mention that keeping you and your family members squeaky clean is actually a matter of survival in its own rights.

The secret to a long and happy life is to live in a clean environment, and you can take that statement to the bank. The lack of proper personal hygiene may get you sick very easily and also you may pass the disease around and all that jazz; that’s how epidemics occur.

The good news is that there are ways to maintain adequate hygiene even if you’re living somewhere in the neck of the woods, as off-grid as it gets.

These ancient survival lessons teach you how to stay clean when there isn’t anything to buy!

There’s an old saying, about “Real men building their own [insert item here]”. In our particular case, real preppers built their own hot tubs.

Why hot tubs, you may ask? Well, the hot tub used to be regarded by many as a luxury if not a whim. Remember that old saying: that one needs only two baths in his/her lifetime – one when you’re born and the other one when you’re dead?

Especially back in the day, hot tubs were pretty rare not too long ago (circa 1700s), when  getting one was a rare experience, familiar just to kings and queens. Alright, and the rest of the infamous 1%, maybe.

One of the benefits of soaking yourself for hours in hot water is that such activity relieves pains and aches, beside getting you clean in the process.

But after reading this article, you’ll understand how hillbilly hot tubs changed the world for ever. And you’ll also understand that getting your fingers pruney is a God-given right for every American, even for those living in the back woods.

Also, let’s not forget that one of the most popular pieces of gear for outdoors survival after a hard and long day doing God-knows-what is a hot tub, right?

I am only kidding folks, but if you don’t know how to build your very own personal hot tub, well, that’s why I am here. I’ve scoured the depths of the Internet and I brought together some of the best tutorials in the world for helping you building your little piece of heaven.

To begin with the basics, a DIY hot tub consists of two main things: a tank which makes for the bathtub itself and a device for heating the water inside of the tank. That’s all there is to it; it’s pretty straight forward.

As far as tanks go, you have two options: to use a prefabricated one, like an IBC container or a stock watering tank, or to build your own bathtub from scratch from wood; just imagine a big barrel of sorts.

Soaking in a wood-fired hot tub requires some planning, at least a couple of hours in advance, but the involvement in one’s bath is part of the attraction.

Here’s a video tutorial about how to build a cedar wood hot tub using planks of cedar and lots of skill and materials.

The end result is a reminiscent of a big barrel, which looks pretty cool actually, but you’ll require some mad skills to get this done.

You’ll also require beaucoup gear, like cedar wood suitable for cutting and shaping, saws, chine joints, nails, a power drill, a carpenter’s level, screws and insane wood-working skills. But it’s doable, after all that guy did it and it looks pretty awesome.

However, there are other ways.

The hardest part of our first project is to build the tank itself, as it requires serious carpentry skills, but you can always go for a hillbilly hot tub that uses an IBC container using, for example, a prefabricated hot tub, then you just have to worry about the water heating device.

Here are two different projects, both involving a DIY wood-fired hot tub. The first one uses an IBC container, a steel cage, an old gas cylinder and pallets, plus some plumbing connectors. Except for the container, the rest of materials were free scrap.

The IBC container holds 1000 liters, which is more than enough for a hot tub, while the steel cage and the pallets are used for making the structure that will keep the water-filled container firmly in place. The pallet wood is used for decorating the steel frame; it makes it look better and all that.

As for the heating device, here’s where the old gas cylinder comes into play. Basically, you’ll use a stove water heater. How does it work, you may ask? Well, it’s pretty straightforward: the stove water heater uses a heat exchanger for transferring heat from the stove to the water.

In this project, the hot tub is filled with water which is slowly flowing via a garden hose through the copper pipe and it’s getting hot as it fills. The process is relatively slow, but it produces very hot water.

The second DIY wood-fired hot tub system is very similar to the previous one, just that it uses a galvanized stock tank instead of an IBC container. Also, the heat exchanger system is the same serpentine made from copper pipe, but for heating the water, this project relies on the thermosiphon principle.

Think about our ancestors. They didn’t have the luxury of the modern industry but they were able to create their own hygiene products from simple, readily available stuff.

Do you wonder how our forefathers took care of their personal hygiene when they traveled for months? Click the banner below and uncover their long forgotten secrets!