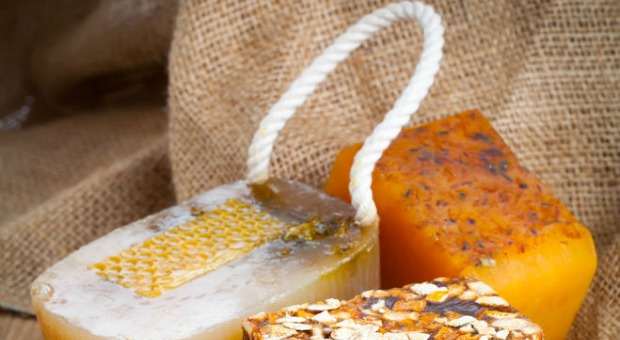 How To Make Soap On A Rope For Survival

I can remember as a kid, my dad would get soap on a rope as a gift and it never made much sense to me.

I thought, hmm, what a weird thing to do to soap. That’s life as a modern kid in a civilized world. Soap on a rope was a novelty item, and now it’s practically unheard of. So, what was its purpose, and why do you need it as a survival item?

Originally, soap on a rope was invented by the English Leather Company in 1969 to keep their soap from getting soggy and dissolving. Yep, tricked me, too; I would have guessed that it’s much older than that, but apparently not. Still, I’d be amazed if at least one enterprising pioneer didn’t think to make this novelty, because it’s truly ingenious if you think about it.

Since soap can be made mostly with ingredients that you already have around the house, let’s make some soap on a rope.

Why would you want your soap on a rope?

Think about it. Many good soaps take months to cure properly, so wasting even one bar is foolish in a survival scenario because good hygiene is going to be what saves you from disease. Since it’s also going to be a huge trade commodity, you’ve literally lost what will equate to money if you lose a bar or soap or let it sit in a puddle and dissolve.

Enter soap on a rope. You can take it to the river with you and hang it around your neck or your wrist – a wrist rope seems more functional to me – so that you don’t lose it in the stream or drop it in the dirt. You can also hang it up to dry so that it’s not sitting in dirt or a puddle of water that will cause it to dissolve.

Soap on a rope is one of the most simply frugal ideas I can think of.

But, how do you make it?

The short answer: just like you make any other soap, except you put a rope in it.

Can I make soap without lye?

In order to make a solid soap, you’re going to need wood ash, because of the lye (sodium hydroxide) in it. Of course, right now you can just buy lye, or buy melt-and-pour soap that’s already been saponified (the process that lye instigates that causes the liquids and fats to mix and gives soap it’s cleansing properties), but that won’t be the case if SHTF, so it’s good to know how to make it yourself. You’ll be surprised how simple the process is.

And think about our ancestors. They didn’t have the luxury of the modern industry but they were able to create their own hygiene products from simple, readily available ingredients.

These survival lessons from our ancestors will teach you how to take care of your hygiene when there isn’t anything to buy.

The number one thing that you need to know about soap making is that you need to follow the number one rule in chemistry class – use safety equipment and precautions. Lye is extremely caustic, but if that worries you, just remember that fire is lethal too, but that doesn’t stop you from cooking and camping. Just be careful.

And no. You can’t make soap without lye. If you try to, you’ll just have a bucket full of fat and water. The lye causes the saponification process that allows them to mix and gives soap its cleansing properties.

If made correctly, there is not unreacted lye in the soap, but it’s important to use the right ratio of lye to water in order to make sure that this is the case. There are many soap calculators that you can find to help you with this process until you have it down.

A couple of safety tricks to remember – always add the lye to the water, not the water to the lye. As soon as you add the lye, the chemical reaction will start and the mixture will heat up ad steam for 30 seconds or so. Keep a bottle of white vinegar on hand to neutralize the lye if it splashes on something. It will eat a hole in cloth or burn your skin.

Stir immediately so that the lye doesn’t settle in the bottom and possibly cause an explosion (don’t be a baby – you can do this. Granny Clampett did and look how long she lived). Seriously, though, don’t worry about it overly much; just be careful and do it right and you’ll be fine.

The only ingredients you actually NEED to make soap are water, lye, and fat. That’s it. Of course, smell-good agents, essential oils, and colors make it smell nice, add therapeutic properties, and make it look pretty, but they’re not necessary to make soap that will get you clean.

Now, to make soap on a rope, you obviously need the soap to be solid, so if you’re making your own lye, use wood ash from hardwoods. Otherwise, your soap will be soft.

There are a variety of fats that you can use, including tallow, lard, olive oil, coconut oil, jojoba oil, avocado oil, or any of the “butters” – cocoa, shea, or mango butter. You’ll want to use a combination of fats and oils in order to have the right consistency.

There are two ways to make soap: hot processing and cold processing. As the names suggest, one method requires heat and the other doesn’t.

The main difference is that the heat in hot pressing speeds up the saponification process so that your soap is ready in days instead of weeks, like it would be with cold-processing.

Here’s a cold processing recipe from DIYNatural.com. She’s been a soap maker for many years, and actually teaches university classes on the subject.

The notes after the ingredients are hers, not mine, and I’m paraphrasing her directions. I’ve also added in the rope, and the rope instructions. 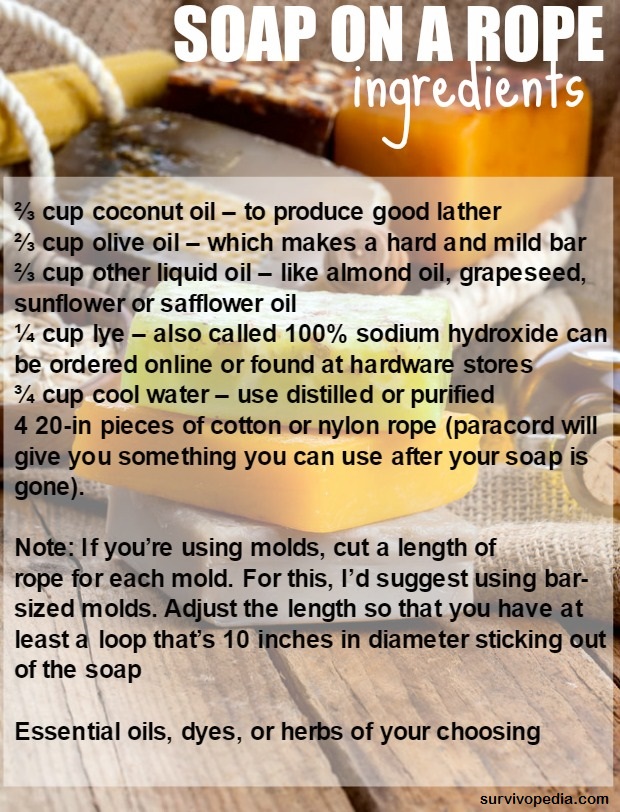 First is the chemical reaction, so use gloves and goggles if you so choose. Measure out the water into a quart-sized canning jar and slowly add in the exact amount of lye, stirring as you add it. Stand back a bit so that you’re not breathing the fumes caused by the chemical reaction. Stir until the water starts to clear, then move to the next step.

In a smaller container, combine the oils. You should have almost exactly a pint. Heat them up for just a minute either in the microwave or by placing them in a glass jar and placing them in hot water. You want the temperature of the oils to be about 120 degrees.

By now, the lye mixture should have cooled to about the same temperature. Let the oils and the lye cool until they’re between 95 and 105 degrees F. This is an important stage because if it cools too much it’ll combine quickly but it’ll be crumbly.

When they’re both at the right temperature, pour the oils into a glass mixing bowl and slowly stir in the lye until it’s all mixed, and keep stirring for 5 minutes. The soap mixture will thicken and become lighter in color. Keep stirring either with by hand or with an immersion blender until it looks like vanilla pudding. When it does, add your colors, oils, or herbs.

Pour your soap into 4 molds, or one loaf pan or cardboard box lined with parchment paper that will make 1 solid piece that you can cut into smaller bars. Pour the soap into the molds or pan. Double the rope over into a loop and press the ends down into what will be the center of each bar of soap that will extend from one end of the bar to the other.

Wrap the mold in plastic wrap and then in a towel so that the saponification process can start.

Check it after 24 hours and if it’s still warm or soft, let it sit for an addition 12-24 hours. When it’s finally cold and firm, turn it out onto a piece of parchment paper.

If you made one solid piece, cut it into bars now, making sure to cut it so that the rope runs down the center of each bar.

Since this was a cold process, the soap will need to cure for 4 weeks or so. Turn it every week or so to expose all sides to air. You can also cure it on a rack and won’t have to turn it. Once your soap is completely dry, wrap it in wax paper or store in an airtight container because homemade soap makes its own glycerin, which attracts water.

Now you know how to make quick and easy soap on a rope!

Do you wonder how our forefathers took care of their personal hygiene when they traveled for months?