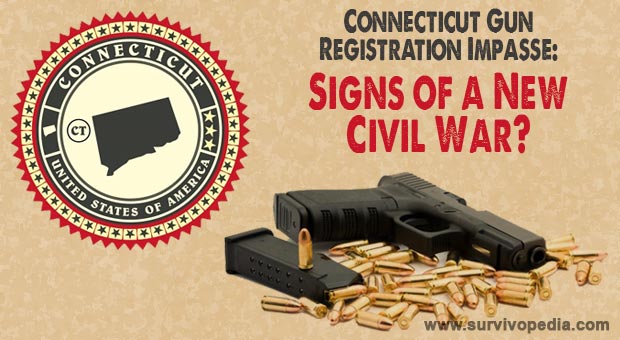 The state of Connecticut had become the front lines for the gun debate. Gun owners and state legislators are squaring off against one another, with neither side being willing to budge.

While legislators have passed new laws restricting firearm sales and requiring registration, the people of Connecticut are not complying.

This impasse came about in response to the December 2012 mass shooting in Sandy Hook Elementary School. Some say that the Connecticut State Legislature overreacted in passing some of the strictest gun laws in the country. The new laws made a number of changes, many of which are blatant violations of our 2nd Amendment right to keep and bear arms. Among these violations is a ban on what are being defined as “assault weapons” and “high capacity magazines.”

As with much of what the gun control crowd is doing, these terms are not being used correctly. They are defining assault weapons as any firearms that are military in appearance and high capacity magazines as those which hold more than 10 rounds.

In order to accommodate current gun owners, a grandfather clause was written in the law, requiring registration of those guns and magazines so that the owners could keep them. While the whole of the new law has not yet been put into effect, the registration requirement had a January 1st, 2014 deadline. By that date, the state had received only about 50,000 registration applications, with anywhere from 20,000 to 300,000 gun owners defying this law and refusing to register.

Several different gun owners groups have publicly declared to the Connecticut state government “If you want them, come and take them.” While no orders have been given to state police agencies to do just that, people are holding their breath and waiting. Should the state police receive and carry out those orders, we could see the first shots fired in a new civil war; one in which conservative citizens of the United States are taking a stand against what is becoming a tyrannical government.

One problem which the Connecticut state government faces is that the about two-thirds of the police in the state are amongst those who have refused to register their firearms and magazines. This discovery, which was made by a legislative intern whose father is a police chief, has lawmakers and bureaucrats stopped in their tracks. They can’t depend on the people they need to enforce this law and they can’t even fire the offending police officers, as that would leave the state and municipalities without enough police on duty to keep the peace.

It’s one thing for lawmakers to pass laws, but it’s another thing to enforce them. Ultimately, the people either choose to obey the law or not. If they don’t, they must be forced to obey or forced to pay some consequence. But what happens when the state is unable to force its will upon the people?

This is the trap that the Connecticut legislature has placed themselves in. If they can’t enforce the law, then it’s as if the law doesn’t exist. But to enforce the law, they’ll have to find the gun owners and send police to their homes. Without registration of those firearms, finding those gun owners will be a difficult and dangerous job.

Many gun owners, conservatives and preppers across the country have been waiting for this point to be reached. Ever since President Obama declared war on our 2nd Amendment rights, gun and ammunition sales have skyrocketed in preparation for laws just as we see here in Connecticut.

America has become an armed camp, with over 270 million guns in the hands of her citizens. Should the government decide to go after those guns, many would stand their ground, fighting and dying, rather than giving up their guns.

This problem may be starting in Connecticut, but you can be sure that it won’t stop there. Many other blue states as well as the federal government are working to bring about the same sorts of restrictions.

New Jersey may be the next state where we see a standoff between gun owners and the government, as the legislature is seeking to pass laws as restrictive as those in Connecticut. Gun owners groups in New Jersey have made the same statements as their brothers in Connecticut.

There are only two ways for this to end. Either the government is going to have to back off on their illegal trampling of our 2nd Amendment rights, or we’re going to see bloodshed.

If there is any one trigger that could start the 2nd American Revolution, this is it. When police start going door to door, breaking into home with SWAT tactics, so that they can steal our guns, American citizens will either have to rise up and take our country back or become slaves of a new communist regime.

Video first seen on The Blaze.