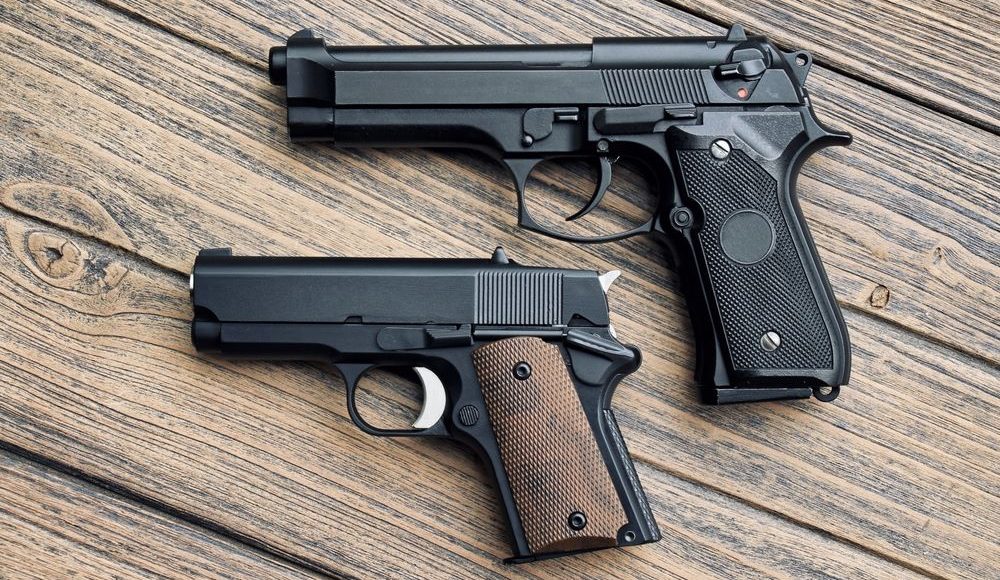 Americans have an obsession with guns according to left-wingers, and that’s pretty normal, considering what the Second Amendment in the Constitution reads: “A well-regulated Militia, being necessary to the security of a free State, the right of the people to keep and bear Arms, shall not be infringed.”

What the left conveniently forgets on a regular basis is that any form of gun control is not constitutional, but let that go for now.

The thing about gun control is that it doesn’t work, and if you want to test this theory, just put a sign in front of your house that reads Gun Free Zone, and see if it becomes the safest in the neighborhood. I’m just kidding, but it’s common sense, really, that criminals don’t care about laws, because guess what: that’s why they are criminals in the first place.

And this is the reason the vast majority of mass shootings take place in gun-free zones, that basically become victim disarmament zones. When private citizens are allowed to defend themselves, especially in concealed carry states, violent crime decreases dramatically, because after all’s said and done, an armed society is a polite society.

I bet you didn’t know it, but violent crime and gun control laws are pretty much correlated, as in the more gun control there is, the more violent crime occurs, and you can check that out in states like California, Illinois, New York, etc.

After this short introduction, let’s move along and follow the current news cycle. Enter SARS-Covid19, and what do you know: despite the lockdown, Americans are buying guns like there’s no tomorrow. There’s an old saying in rural America: when in doubt, buy a gun! All jokes aside, according to various reports in the mainstream media, more than 2 million guns were purchased last March alone, most of them in Illinois, followed by Texas, Kentucky, Florida, and California. To put things into perspective, this represents an increase of 1.1 million guns compared to sales figures from the same period of time, March 2019 respectively.

There were also reports from various gun shops all across America about supply issues due to the gun-rush and all that palaver. The last time Americans bought guns in such a crazy manner was in December 2015 as the Obama administration hinted at restricting what the mainstream media calls assault rifles following the mass shooting in San Bernardino, CA. Why are Americans buying lots of guns now, you asked? Well, this is anyone’s guess really, but there are a few reasons for that: first, preppers don’t trust the government, hence with the lockdown and all that, if SHTF, a breakdown in law and order is to be expected and then it’s every man for himself. In this regard, guns are self-help survival tools by any definition.

Another reason would be the fear of the general public of Big Brother further infringing on gun rights, now with the pandemic eroding civil rights via dictate and all that. Basically, Americans fear that the US Government may become tyrannical, as per the Declaration of Independence actually, and they are taking precautionary steps.

We hold these truths to be self-evident, that all men are created equal, that they are endowed by their Creator with certain unalienable Rights, that among these are Life, Liberty and the pursuit of Happiness. — That to secure these rights, Governments are instituted among Men, deriving their just powers from the consent of the governed, — That whenever any Form of Government becomes destructive of these ends, it is the Right of the People to alter or to abolish it, and to institute new Government, laying its foundation on such principles and organizing its powers in such form, as to them shall seem most likely to affect their Safety and Happiness.

Again, this is common sense, but it’s interesting that many Americans bought their first gun during the Covid19 pandemic, and the vast majority of the 2 million have been handguns, as opposed to long guns/rifles.

As per rifles and shotguns, we must mention the BUSHMASTER XM-15 QRC, the S&W M&P-15-22 SPORT, the lever-action MARLIN 336,  and the classic MOSSBERG PATRIOT and 500. Now, if you’re looking to buy a gun for self-defense, it’s important to learn how to choose the best tool for the job so to speak. Obviously, the most popular guns are probably the best and/or the cheapest, but popularity alone is not a good enough reason to buy gear.

When it comes to guns for home defense, handguns come to mind first; you should choose based on reliability, overall quality, accuracy, ease of use, and capacity (magazine capacity). Stopping power is also important in a self-defense situation, and here the caliber of the bullet comes into play. Popular wisdom tells us that a .45 ACP is way more effective than a 9 millimeter in terms of stopping power in a handgun; however, it’s worth mentioning that the FBI and police departments all across America switched to 9mm handguns in 2015.

One big advantage of owning a 9mm handgun is that it comes with a larger capacity magazine compared to, let’s say a .45 ACP. We’re talking about a 15+1 or 17+1 magazine in a 9mm handgun, compared to a 7+1 or 9+1 capacity for a .45 ACP, and yes, that counts in a shootout, especially if you consider that police officers have a 28 percent hit rate. As in, when under fire, you tend to miss a lot, and having more rounds would definitely help; 9-millimeter rounds are also cheaper, so you can spend less money on practicing, which is another advantage for beginners. Finally, a 9mm gun has less recoil than a .45 ACP, which means more accuracy. A .45 ACP is a slower round, yet it has more penetration power, even if the energy is dissipated very rapidly. Regardless of what you choose, just practice a lot and you’ll do fine, regardless of the caliber.

Here are my top ten guns for defending your home, pandemic or not, in no particular order:

This is incidentally the sidearm of choice for the US Armed Forces, and it’s pretty obvious that the military uses good gear. The gun is light at 33.3 ounces and has a cool 3-Dot Sight System for acquiring a target. The M9 is very accurate out of the box, comes with a reversible magazine release for both left/right-hand users, and has a sweat-resistant grip.

This is a legendary handgun, and the golden-standard in the industry, being hugely popular due to its robustness, efficiency, simplicity, and ease of use. The Glock 19 comes with rough-textured frames for amazing grip and interchangeable backstraps, being capable of operating in all weather conditions with industry-leading ergonomics and performance. The gun comes with 3 magazines and enlarged reversible magazine releases.

This is Navy Seals’ weapon of choice. Do I need to say more?

Yes indeed, this is a lower capacity handgun, but it’s super compact, which makes it great for concealed carry, it’s a proven performer and features a 5.3” fiber-optic sight radius for fast-tracking and a factory ported barrel and slide, with a barrel length of just 3.3 inches.

This is a classic six-shooter with a 6-inch barrel and super-accuracy provided you’re taking your gun-range lessons seriously.

This is a classic handgun, proven in action in the last 100 years, and making for one of the most reliable home-defense tools out there. The 1911 model is big and heavy, and features a dual spring recoil system, being a man’s gun par excellence.

This is the ideal all-rounder, being incredibly compact and easy to carry around, and the weapon of choice for many law enforcement officers, due to its reliability and proven knock-out power.

This is one of the most formidable concealed carry choices you can make, being hugely reliable, proven in action since 1975 and boasting immense stopping power for home and/or personal protection, while being relatively easy to carry.

This is another excellent home defense gun, especially for first-timers, due to its huge capacity, and side in frame design, which provides excellent recoil management.

Walther is a legend in the gun-enthusiast community, being a global leader in producing dependable/high-quality guns. This is arguably their best handgun yet, with an ergonomic grip and one of the smoothest triggers you’ll ever find the stock in a gun.

This concludes the article for today. If you can’t decide on what to buy just from what you read on the internet, I would advise you to take a trip to the nearest gun range, rent and shoot a few models, then make a choice based on personal preference, budget or what have you. Stay safe and happy hunting.