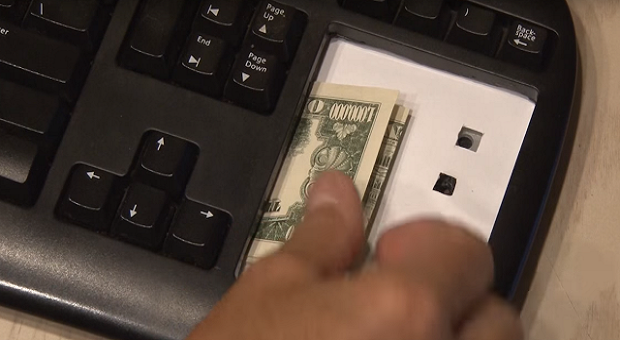 When speaking of things to hide, I am not referring to your dirty past, but valuables, stuff like jewelry, cash, sensitive information/documents or even gold which may very well be subject to confiscation.

It was in the past, if you remember the good old pre-World War 2 days and 1933’s Executive Order 6102. If you don’t remember, well, it’s time for a reality check, because history has a bad habit of repeating itself, whether you’re a scholar or just the average Joe Public.

Now, regular folk tends to keep their valuables in a bank safe box or at home, under a cipher lock or something similar, in case they can afford such luxuries.

However, keeping your stash in a bank safe deposit box is not the best idea in the world, if you’re familiar with the notion of bank runs or the aforementioned confiscation policies, in which case your valuables will disappear like fresh driven snow in the Kalahari Desert.

The other option is to keep your valuables at home, in a classic safe box, but these things tend to be really expensive and also they draw attention, if you know what I mean.

Another thing to contemplate if you’re a proud safe-owner is that a burglar who was tipped that you have such an abomination on your premises will be perfectly able to force you at gun point to open it; you know what I’m talking about, right?

Basically, could be pretty hard to maintain OPSEC when you have installed a safe-box in your house. I’m not trying to downplay the notion of safe-boxes, they sure as Hell have their uses, but a smart prepper (especially a prepper on a budget) should look at alternative means to hide his/hers valuables.

Now, from what I’ve learned about the psychology of a home invader, whether he’s a police officer or a burglar, I discovered a modus operandi which can be summarized in three basic rules: home invaders first look for openly displayed valuables, after that they look for juicy-looking (as in appealing) storage spaces (like classic safe boxes) and after that they’ll look at any other type of place which may be harboring valuable things like cash and jewelry.

Basically, all home invaders follow this simple algorithm for maximizing their chances of success, given the fact they only have a limited amount of time to spend in your home.

And here our DIY safe projects thingy comes into play, as they look inconspicuous generally speaking, making them the ideal choice for storing your valuables, sometimes even in plain view. And you know, stuffing money inside your mattress is getting old, get over it and keep reading.

My first project is about how to build a safe box (yes, you got that right) using your old/left-over Legos, thus turning them into a hidden/secret/magnetized/whatchamacallit safe. It sounds pretty darn’ interesting, doesn’t it?

The beauty of this project is its “in your face” simplicity. I mean, who would think that you’re hiding cash or jewelry inside a Lego block? All kids have Legos and that means you’ll draw next to zero suspicion hiding your valuables inside a Lego-made safe box, right?

Another cool thing about this project is the fact that you’ll not require spending lots of money on materials and tools and you probably already own a Lego set. It doesn’t get any better than that, believe me folks.

Now, just take a look at this video and learn how to turn your left over Legos into a magnetized safe. By magnetized I refer to attaching a bunch of magnets to your safe, making the secret drawer accessible only if you already know where the internal magnet is located.

The general idea is that you’ll be creating a Lego structure which features a hidden drawer inside, the perfect place to hide some cash or your engagement ring (use your imagination, ok?). The magnet gizmo makes the secret drawer to open only when using another magnet.

Moving along with the article, the next DIY project is a secret/hidden wall safe. You may be familiar with the concept or not, but just take a look at this cool instructable video below and you’ll learn how to securely hide your cash/other valuables almost in plain sight via an easy to make wall-safe box which comes handy for storing even things like guns and ammo.

This particular project uses a fake wall-socket which masks a relatively small safe-deposit box behind, the perfect spot to hide some money and jewelry, but the limit is your imagination when it comes to hidden wall safes.

You can make them as big as you want, for example building a secret (and very big) compartment behind your TV using the same principle.

Another idea is to build a secret compartment/safe box using a fake air vent as a cover. The idea is basically the same, making for a clever and inexpensive way to hide your valuables in plain sight.

Obviously, you can use all these different ideas for keeping your stash safe, as in “don’t put all your eggs in the same basket”. Redundancy is the name of the game.

Check out the video and you’ll learn how to install your fake air vent securely using just a hot glue gun, screws, a jig saw and sheet rock saw, it’s a fairly easy project which may be completed in a couple of hours.

I mean, can you think of a house where there are no shelves around? Shelves are ubiquitous, they’re an intrinsic part of the American culture and way of life sort to speak. And that makes them the perfect place to secretly store your valuables, don’t you think?

Another idea for secret compartments to stash your valuables/guns or whatever is also borrowed from the movies: a hollow book (usually a Bible) and this one is a true classic. And the best thing is that you can find a hollow book for sale almost anywhere, they’re that popular.

However, here’s a video about the DIYing just in case.

Now, if you’re a PC owner, you can create a small secret compartment in the unused portion of your keyboard, the Number Keypad respectively, as per this video. This is as cool as it gets, the bummer is the space is relatively small.

Last but not least, this is one of my all-time favorites: how to build a secret safe using old CDs. Provided you’re old school, just like yours truly and you’re still using CDs, you can easily make a  secret-safe-hidden-in-plain-sight by using a cake box full with DVDs or CDs, whatever you have lying around the house.

The idea is to cut their inner hole and then glue them together, thus creating a secret hiding space inside where you can keep diamonds, rubies or some cash.

Try one (or more) of these clever methods to protect your cash or your valuables, use your creativity and get back to us with a comment in the dedicated section below.