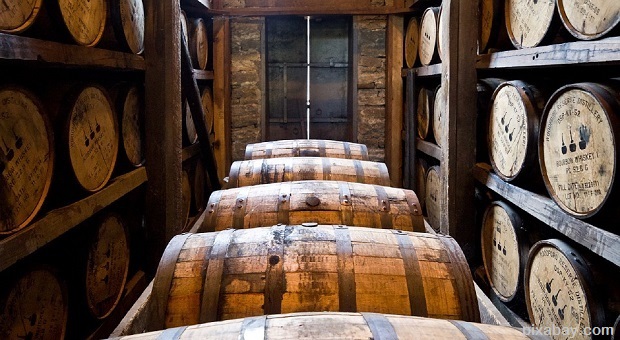 Let’s begin today’s article by agreeing that having the perfect tools and/or supplies at your disposal in a SHTF situation is a pretty rare occurrence.

The idea is that you’ll have to deal with an emergency using what’s available at that particular time and place.

That’s why, from a prepper’s point of view, stocking multi-purpose items is the way to go. That brings us to today’s topic: whiskey.

I know what you’re thinking – Wait a minute, whiskey and survival? What do they have in common? The answer is – much more than you think, my young Padawan.

With these questions in mind, let’s take a look at the answers.

To begin with a little bit of history, alcohol has been well known for its health benefits for hundreds, or even thousands, of years. Whiskey is a beverage with a high alcohol content that can be used in a multitude of ways during or in the aftermath of a SHTF event.

Regardless of whether you’re a big fan of Prohibition or a whiskey aficionado, the fact remains that many folks will always need their whiskey in a survival situation for various things, including drinking it or using it for trade, fuel, or medicinal purposes.

Are you ready to head to the liquor store? When the going gets tough, whiskey may be one of your best friends, because it’s a true multipurpose tool which may very well save your life someday. If you’re not stocking whiskey yet, keep reading.

Since humanity’s earliest days of trading, people literally risked their lives in the pursuit of happiness, which often included whiskey, wine, beer, or any alcoholic beverage. If disaster strikes and society breaks down, whiskey will be useful for lots of things, including bartering, for that very reason.

The more things change, the more they stay the same. Even though society is infinitely more complex than it was 300 years ago, whiskey will still likely become a form of currency during a crisis situation. It’s just the kind of “stuff” some people must procure for themselves at any cost.

But there’s more to whiskey than a valuable commodity in times of peril, though just that would make it a must-have item in your survival stockpile.

Use Whiskey as Combustible

Besides trading it, you can make fuel with it. It’s great to help start a fire when your combustible is damp. Whiskey is great as a fire starter provided its alcohol content is over 40% or 80 proof, so keep that in mind when shopping for your survival whiskey. Also, you can use it as a fuel for your lamp, or as a fire accelerant.

If you’re stocking a higher-proof whiskey, something like 100 proof or more, you can always use it as emergency combustible for certain types of engines. And yes, that will increase its value significantly as a barter-item in a survival situation.

Keep in mind that powering a traditional engine with high-proof whiskey is not a child’s play, as it requires significant tweaking to the ignition timing, the idle circuit, etc., but it’s possible if you know what you’re doing.

You can use it even as a last-resort, self-defense tool,  in a Molotov cocktail. And if the going gets really tough, you can always break the bottle and use the shards as a cutting tool or even as a weapon.

Whiskey Works as a Solvent

For the engineers out there, alcohol is a great solvent.

That means whiskey can be used successfully for cleaning your guns, an engine, electronic components and even for rust prevention.

Another cool thing about whiskey is that if mixed with water, it kills harmful bacteria, hence you can always use it to disinfect water procured from dubious sources (after filtering it). Also, if you add some whiskey into your water supply, it will last much longer without spoiling (and it will taste better for sure).

You can use whiskey in an emergency for its hygienic properties, as it efficiently kills odors and bacteria. You can use it as a deodorant, as a perfume (seriously), or as a toner/facial astringent (think aftershave). You can always refresh clothing with whiskey if there’s nothing else available or you can use it to repel/kill bugs.

Whiskey can be used to treat/prevent swimmer’s ear due to its excellent antiseptic and drying properties (you can even disinfect medical instruments with the stuff) and it’s great to use as a medicinal mouth wash, especially when confronted with a tooth ache. Just don’t try it before a job interview, all right?

Since we’ve already started, let’s talk about whiskey’s health benefits from a scientific point of view. All types of whiskey decrease the risk of blood clots, help prevent stroke and dementia, and promote healthy cholesterol.

According to various studies, if you drink it in moderation, whiskey not only alleviates boredom but it will decrease your risk of diabetes. It actually destroys cancerous cells. This is especially true for bourbon, which is  required by law to be aged in oak barrels for a minimum of 2 years. During the aging process, anti-oxidants such as tannins and vanillins found inside the wood are passed into the bourbon.

Are you sold just yet? If not, let’s take a look at other medicinal uses for your precious whiskey reserve.

Whiskey can be used as an antiseptic agent, but topically only. You should avoid using it for treating deep cuts, though if nothing else is available, whiskey will do.

Also, whiskey is a pain reliever when ingested in small amounts for sore/aching muscles. If you mix whiskey with honey, it will help alleviate a sore throat, and a tiny quantity works miracles as a sinus cleanser. Just try it once; it will clear you right up.

Whiskey Makes You Happy and Warm

There’s also an even better reason for drinking it that you think; that warm and fuzzy feeling is more than just an imaginary experience; alcohol is a well-known anxyolitic, which means that it reduces anxiety.

It’s also a vasodilator, so it actually makes you feel warm, and it’s an antimicrobial. Because of these chemical reactions, it gets you warm, gives you hope when you’re under stress, and kills bacteria and viruses. More on that in a jiffy, right after the break.

The bottom line is this; stockpiling whiskey for the end of the world is not a bad idea after all, as it comes with numerous benefits, not to mention the fun-factor included in the deal.

Just remember to stock up on cheap whiskey with a high alcohol content – 80 proof or higher – as this guarantees it will ignite, and disinfect, better. For your personal drinking pleasure, feel free to stock some of the good stuff; there will certainly be plenty of people willing to trade with you if you find you have extra!

To store it long-term, always purchase your whiskey in glass bottles instead of plastic. That way, your whiskey will store indefinitely as long as you keep it in a cool, dark place with the bottles upright, like in the old days.

I hope this article helped, folks. If you have other ideas or suggestions for using whiskey in a survival situation, feel free to tell us about it in the comments section below!